For Season 15 we decided to revamp the structure of our League. We hope to be able to address some of the more common feedback – too many teams dropping out in the middle of the season leading to a lot of default wins and little gameplay, high skill-variance in groups and a slow progression in general.

This is meant as a short overview of how the new system works, and what it means for your team.

Each season is split into four phases.

“Phase 0” is the Calibration Phase, a short weekend tournament near the end of the signup period, designed to ensure teams are playing at the right level. While a team cannot end up at a lower level than their previous season’s result, doing well means they will start the season placed higher than before.

Phase 1 to Phase 3 see teams split into groups of 4. In each phase teams play a 2-games Round Robin group stage. Promotions and relegations happen at the end of each phase, with results at end of Phase 3 carrying over to the following season.

From Division 2 onwards, each division will be split into sub-divisions – Upper, Middle and Lower. These will act as its own mini-league, with promotion and relegation possible over the course of the season. Teams can either move up, down, or hold their position, depending on the division and the phase.

The exceptions to this structure are:

The only division not undergoing significant changes, the Premier Division remains largely as it was.

There is two groups of five teams playing a 2-games Round Robin group stage, with the top four teams overall advancing to the Finals. The bottom team from each group will automatically drop to Division 2 Upper for the next season, while the fourth-placed teams in each group will drop down and contest Phase 3 of Division 2 Upper — a kind of promotion/relegation playoff. The remaining teams hold their position in the Premier Division. 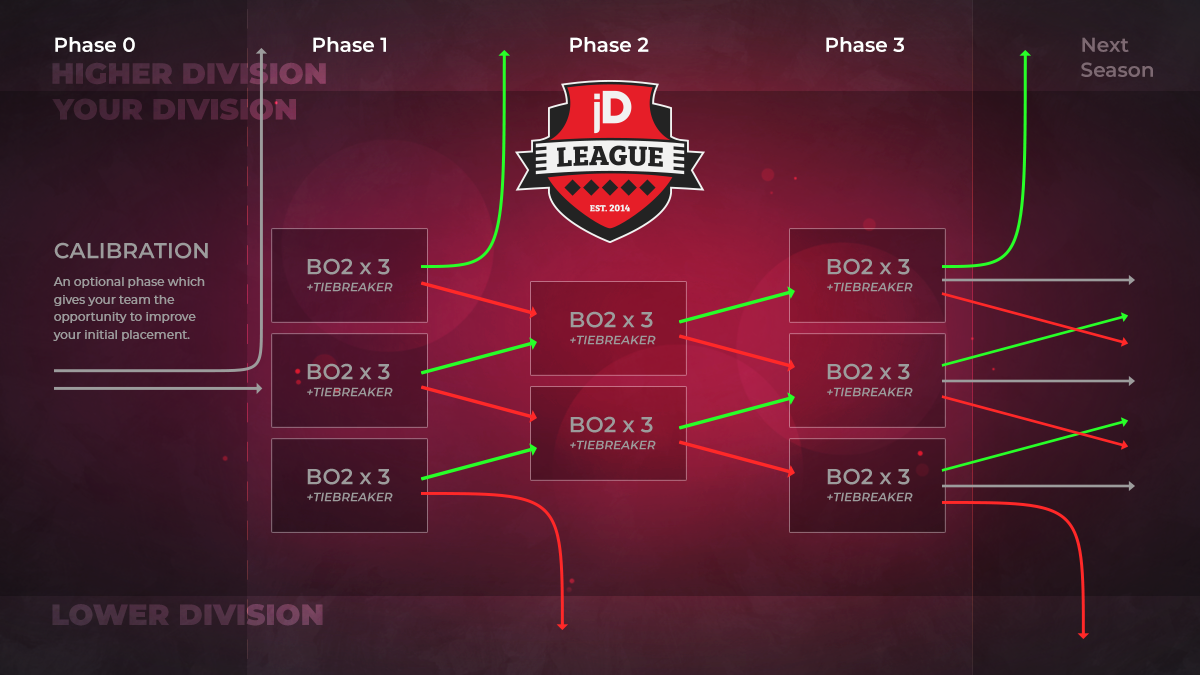 In order to help you understand the new format, imagine a team progressing through a season.


All well and good - but what does this actually mean for my team?

In practical terms, not much changes for your team. After the signups are over, you will be assigned to a group, where you will play 3 matches against the other teams. After this however you will be assigned to a new group, where the process repeats, and afterwards a new group - still, the core stays the same. So no need to be worried, day to day operation will hardly change for you!