5 of the biggest throws in competitive Dota 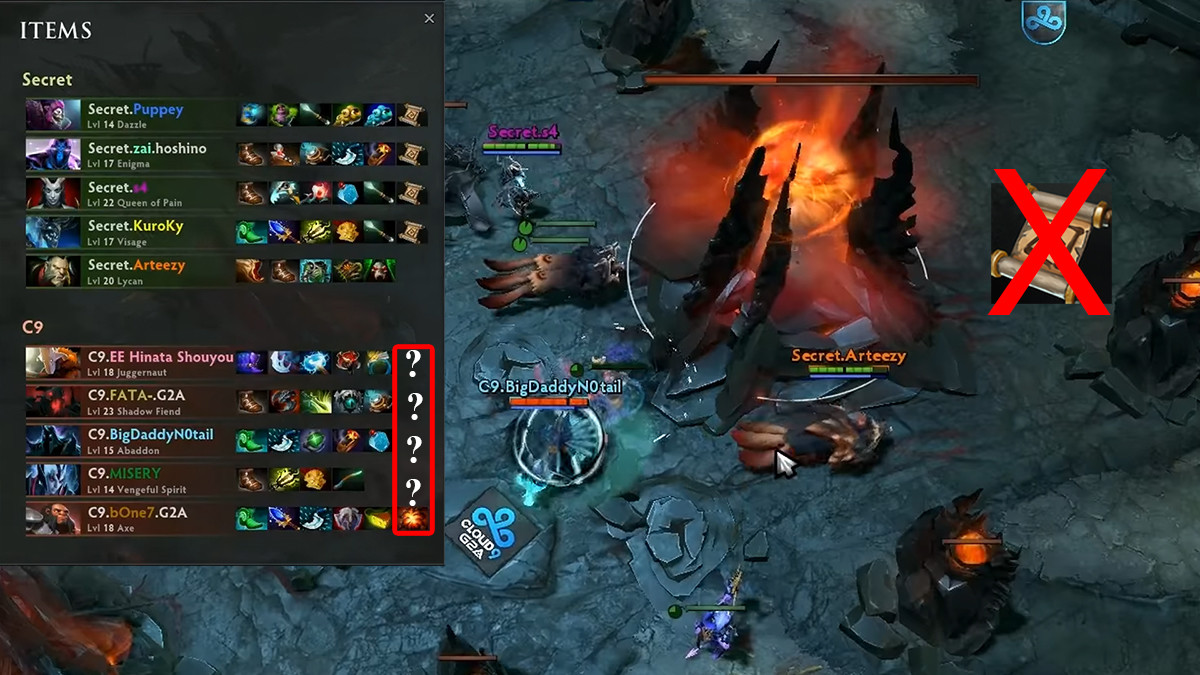 posted by NanaKrustofski,
Dota 2 has one main goal: destroy the opponent's Ancient. Sometimes, teams are only a micrometer away from winning the match, but somehow, Oracle swings fate and they still lose the match. We collected some of the biggest throws in Dota 2. What is worse than losing a game of Dota 2? Losing a game of Dota 2 that you were clearly supposed to win as you actually had the upper hand the whole time. If you have ever thrown away a safe win by making a few stupid decisions (or of course, you played perfectly but your teammates screwed up): don't worry, it even happens to the best of the best!

We collected some of the biggest throws in the history of competitive Dota. There were many matches to select from for this list, so if there is a major throw missing that you think was scandalous, feel free to write it in the comments.

If you have ever watched a tournament, you might have seen the chat spam "322" when a player makes any kind of mistake. This number is the epitome of throwing a game. Involuntary creator of this meme is the Russian support player Aleksey 'Solo' Berezin.

In 2013, the star player was part of rox.KIS*. The team faced zRage* who played with a pair of stand-ins in the StarLadder Season VI. What was expected to be an easy victory for Solo's team turned into a confusing 50-22 loss after 27 minutes filled with die-backs and questionable initiations.

Investigations began quickly as everyone was suspicious about this loss. As it turned out, Solo allegedly placed a bet against his own team which would have rewarded him a win of $322. While he did not receive the money, a mocking meme was created to use against anyone who makes a bad play, implying that they are throwing on purpose.

The series between Cloud9 and Team Secret at the Dota 2 Asia Championships 2015 arguably counts as one of the most iconic matches in the history of Dota. Cloud9 became infamous as they lost a match simply because none of the players had a cheap piece of paper to teleport.

C9 confidently pranced into Secret's base to make the potentially final pish. What the players didn't expect was that Secret simply teleported towards their throne with TP Boots to force a base race. Nobody on the side of the dumbfounded C9 squad had a TP scroll to stop Secret from pushing, so they had to go for an extremely slow walk back. Armand 'bOne7' Pittner tried to go for the big-brain strategy by suiciding in Secret's fountain to buy-back. Unfortunately, he had an Aegis so the process took quite some time and after the second death, he found out he had no buyback.

Secret won the game, then the series, and with just that, history was made.

Throwing a game always feels bad, but for the players of BOOM esports, their match against Team Team at the The Bucharest Minor was probably the worst feeling ever.

Despite BOOM being only seconds away from destroying the opponent's Ancient, they called gg and forfeited the game. BOOM had just lost a team-fight in their base and with that, they apparently also lost all hope. The players did not notice that their own creeps were attacking Team Team's throne during the fight and basically secured the victory. If BOOM hadn't called gg, this one would have been 100% in their bag.

The encounter between Cloud9 and Virtus.pro Polar in the StarLadder Season 11 Qualifiers was one of the longest matches in competitive Dota with 122 minutes on the clock. Nearly the entire game looked like a victory for C9, as they kept advancing towards Polar's Ancient and dealing minor damage since the 36th minute, where the casters already announced that gg should be coming in any second.

The polar bears however were able to defend the attack – over and over again. In the 64th minute, Jacky 'EternaLEnVy' Mao's Lycan was finally able to take down the last barrack and claim mega creeps, but that was not enough to win the game.

After countless team fights and 2 hours of VP Polar being threatened, they turned the tables once and for all as they marched into C9's base. Ilya 'Illidan Stormrage' Pivtsaev's Anti-Mage collected some nice world records during this odyssey: with a score of 44 he got the most kills, most hero damage with 62.2k, most last hits with 2063 and 100k+ gold.

You are Ember Spirit, the game is 57 minutes in and you boast your new Divine Rapier. Three of the enemy heroes are dead and all lanes are pushing in their base. Only one barrack is still standing for them. Of course, you try to destroy it and get mega creeps, what could go wrong? Well, unfortunately even the tiniest mistake can turn things around completely, as Jay from Mineski had to experience in a match against Aces.

While he was so close to winning the game, the opponent's Naga Siren and Morphling were enough to take down the intruder and claim his Rapier, as he had no Remnant left outside to escape. The Morphling became unstoppable with his stolen weapon and Aces marched straight through Mineski's base to victory. This shows that throws not always require a huge error, as a tiny misjudgment can also completely turn the tables.


Which throw in a competitive Dota match is most memorable for you?