Battle for the Aegis: OG are the first back-to-back TI champions ever! 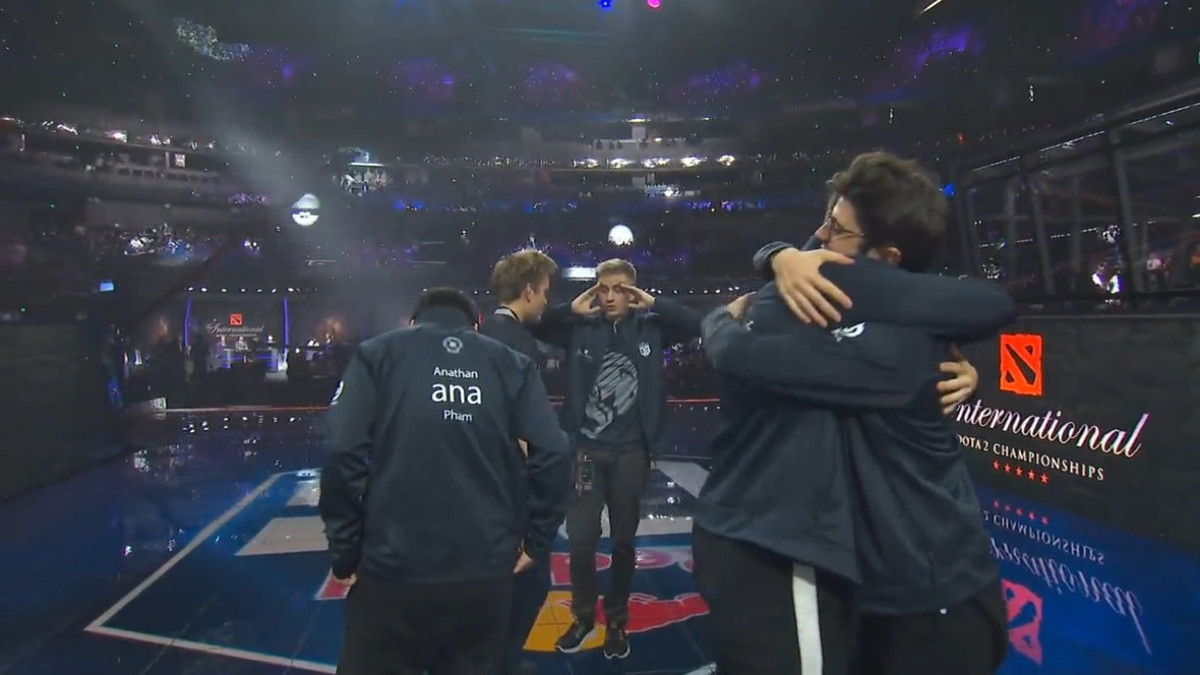 posted by SmittyW.,
The final day at The International 2019 began with a battle of titans and has ended with one. First, PSG.LGD met Team Liquid in the Lower Bracket finals for an epic series. The victor would face OG to battle it out for the $15+ prize money for first place. Eventually, two old acquaintances met in the Grand Finals. PSG.LGD and Team Liquid delivered a thrilling best-of-three series. Both teams were giving their best right in game one, with Yang 'Chalice' Shenyi and Yao 'Somnus' Lu particularly well as killer machines on Centaur and Gyro respectively.

LGD were a little bit ahead but required a good fight to march forward. One of their attempts was deflected by Liquid, who went on to kill Rosh. There they engegaged in another minute-long fight in which especially Xu 'Fy' Linsen and his Rubick's value was beyond any measure. Stealing Faceless Void's ultimate was Liquid's demise and they lost the battle big time.

Although Liquid defended very well after that, they couldn't find the tide-turning engagement afterwards. Instead, LGD got the better of them most of the time and prepared for the killing blow through the bottom lane.

On map two things didn't look as dire for Team Liquid. Omar 'w33haa' Aliwi got much farm on his Templar Assassin, but so did Somnus and Wang Chun 'Ame' Yu on Huskar and Lifestealer.

After a while, it really seemed, as if LGD were closing out the series, pushing for Liquid's bottom barracks once again and reminded one of game one. But this time Liquid held. They were back in the game but they lost their bottom rax, so they had to be really careful for the remainder of the game

The two squads were dancing with each other, ever careful not to engage in a bad fight. This put Lquid in control over the map that they could. In the final minutes of the game, Lifestealer tried to take out Liquid's Ancient in a base race, but this time the TI7 champions had the upper hand with a three-man advantage, tying the series 1-1.

While game one and two were in favour of LGD and the latter had only been turned around in the later course of the game, game three looked much like a stomp by Liquid. w33ha, again on TA, and Amer 'Miracle-' Al-Barkawi on Wraith King sliced through their enemies.

It was only when they had to make it to the highground that their advances came to a hold. We saw another very patient games by both teams with Liquid utilizing their map control, keeping LGD in their base. The Chinese took one very good fight, which made it almost look like they were about to stage a comeback:

But this fight was more of a fluke: Liquid held on to their gold lead that was at some point almost at 40k and finished LGD's Ancient – their Lower Bracket run was complete, dropping only a single map.

By eliminating LGD, Liquid advance to the Grand Finals were they were going to play OG. No matter who won this match: we were about to see our first second-time world champion in Dota 2.

Kuro and OG's captain Johan 'BigDaddyN0tail' Sundstein have a lot of history. The two players belonged to the original line-up of Team Secret. Now they were battling it out for their second TI title.

From comrades to friends to rivals: the two team captains would make sure to give all they have in these Grand Finals for which they worked so hard and fought against all odds.

Team Liquid started into game one in a very dominant fashion. The team composition with Miracle- on TA and w33ha on Meepo had an incredible shutdown potential against which OG couldn't do too much. But then the defending made a phenomenal comeback, obliterating Liquid and taking control over the game.

All of a sudden, OG were in charge and Liquid faced an incredibly powerful Spectre played by Anathan 'ana' Pham. When OG went for Liquid's last tier 3 buildings, we saw yet another comeback, this time by the Radiant defenders and an incredible base race – unexpectedly Liquid came back from the comeback, taking the 1-0 lead.

Although they lost the first game very closely, OG didn't give in. In the next game they showed an absolutely dominant performance, leaving Liquid no chance to take control over the game. Topias 'Topson' Taavitsainen and ana played incredibly well, shutting down all opposition.

OG dismantled the Lower Bracket champion mercilessly, didn't let w33ha or Miracle- get any farm, and tied the series with an impressive 40-11 kill score.

OG continued to dominate their opponents in game three. Topson played a fantastic Pugna, scoring 17 kills, which was only four kills less than all Liquid kills taken together. Of course, obliterating Liquid was a team effort, as every player played their part in this quick 23-minute victory. Would Liquid be able to stage a comeback after two so one-sided games?

Team Liquid gained more composure in game four. They maintained to get a fairly balanced early game and got pick off some kills here and there. w33ha tried to make an impact on his notorious Windranger this time, after his TA was completely outplayed in the two games before.

After 23 minutes, OG found a great engagement however, that put them yet again into an extremely favourable position. Liquid tried to hold them off from their base, and made a break out – it was now do or die for the challengers. OG took this fight masterfully as well, beating down Liquid's last stand and won the series 3-1.

OG made it! After playing a remarkable tournament, they completed their Upper Bracket run to take the Aegis for the second time in a row. Not only are they the first team ever to lift the trophy for a second time, but also to defend their title. Their back-to-back world championship is an absolute sensation without precedent that deserves the respect of all Dota 2 fans.

No, TI8 wasn't just a fluke and OG did everything to prove their critics wrong. Johan 'BigDaddyN0tail' Sundstein and his crew were truly the best team in the tournament and take their second title deservedly!