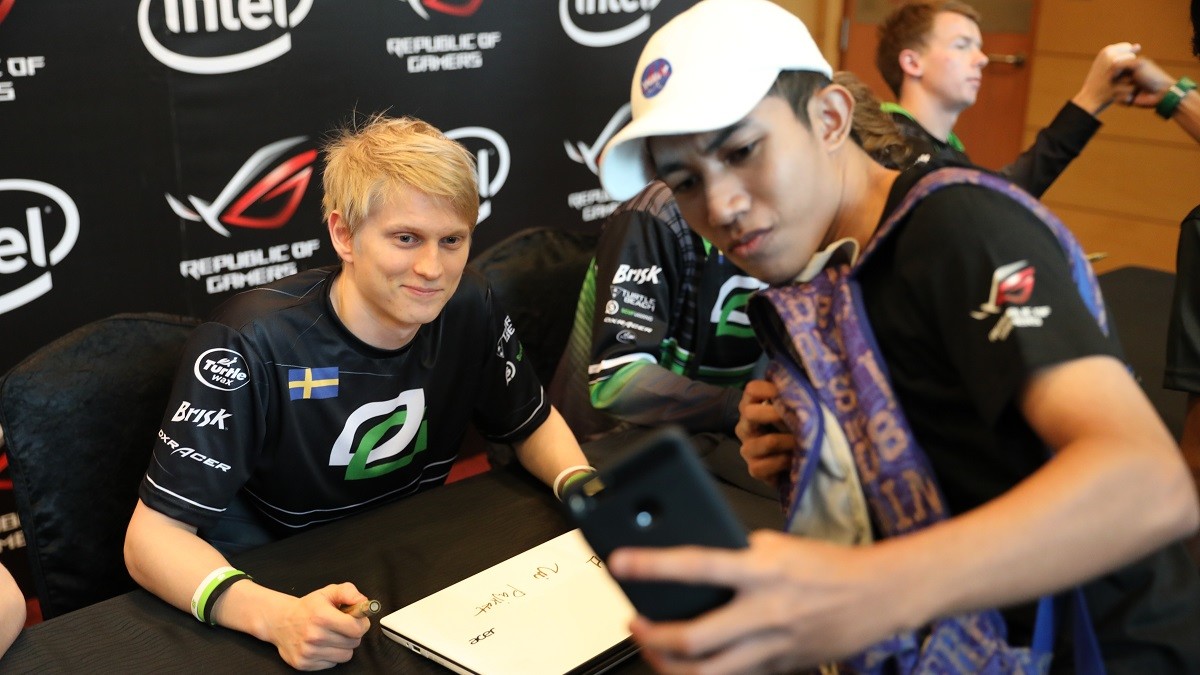 posted by Brasozial,
It’s been a long road, from the first Rampage at TI1 to this point, but now Per Anders 'Pajkatt' Olsson L. has finally reached peak performance. Can he finally lift the trophy? On the 17th of August 2011, Per Anders 'Pajkatt' Olsson L. made history by getting the first rampage in Dota 2 history. The Swede did it during The International 2011 against the French of Virus Gaming*.


No luck with EG

Alongside his old DotA teammate Clinton 'Fear' Loomis, he was part of Online Kingdom* during The International 2011. Although they had high hopes of reaching a good position, and having even dominated their groups, OK.Nirvana.Int were not able to reach their potential in the playoffs. A loss against Invictus Gaming, and then another surprising loss to Moscow Five*, ended the hopes of Pajkatt and his teammates.

After TI1 they left the organization and Pajkatt joined Evil Geniuses with Fear. Finally, the players were able to train together — they even had the chance to bootcamp for two months in China.

Pajkatt didn't stay in the team after the bootcamp, because he switched teams to join his countrymen Joakim 'Akke' Akterhall and Jonathan 'Loda' Berg. Once again, The International 2012 was not the biggest success for the Scandinavians, although they showed decent results by the beginning of 2012.

However, after getting picked up by Counter Logic Gaming* and with Loda leaving, Pajkatt and his teammates weren't versatile enough to win against Orange Esports* in Round Two of the Lower Bracket.

A change was needed, and a big change it was: together with his Danish teammate Rasmus 'rASmus' Fillipsen, Pajkatt joined LGD.Int, the international endeavour of the Chinese organisation.

Back in 2012, they were pioneers in the Western scene. China was known as the non-plus ultra in Dota 2, but no player had ever before actually moved to the Far East to compete with the best teams in that region. They were able to qualify for The International 2013 but couldn't reach their peak performance.

As one of the most promising European teams, their disappointing run ended in the Lower Bracket against Tal 'Fly' Aizik and Johan 'BigDaddyN0tail' Sundstein at Fnatic.

It was another disappointment, which ended in a team swap — back to Europe it was for Pajkatt. This time, he ended up at Ad Finem. Although the Swede changed a lot of teams, one thing was was constant: MiSeRy was by his side.

Both Scandinavians attended the fourth edition of TI, and yet again Pajkatt was not able to succeed at Valve's mega event in Seattle. mouz were not able to reach the Main Event - and this was the final straw for the Swede. The team disbanded, and so did the MiSeRy/Pajkatt partnership. For a first time in a while, MiSeRy and Pajkatt wouldn't be playing together.

Misery went on to play for Cloud9 G2A*, and later switched to Team Secret and Digital Chaos*. His career highlight was second place at TI6 — where Pajkatt coached the team.

Pajkatt, on the other hand, joined Team Tinker*, Alliance and other European squads, but success was to elude him. In fact, after mouz' split up, he didn’t attended another TI again — until now.

It even seemed as if his career was coming to a close — after Mamas Boys* he coached DC for a while, but didn't touch his mouse until the end of December, when he was surprisingly was announced as part of the Natus Vincere roster.

With this CIS engagement, he had achieved the feat of playing in the most of the regions: only SEA and SA were missing. After not qualifying for TI7, Pajkatt returned to the international path by joining Peter 'ppd' Dager's squad, which would later become OpTic Gaming.

After his three-year long odyssey through Western and Eastern European teams, he had finally found his way again. In North America, OpTic grew to be one of the best teams in the region. They qualified for The The International 2018 and won the Starladder | ImbaTV Invitational #5.

This is Pajkatt's first TI since 2014, and the Starladder event was his first offline win in ten years! Pajkatt is back, and finally has a shot at a happy ending at The International.

Can Pajkatt win The International 2018 with OpTic Gaming?