"ARE YOU SERIOUS?!" 30k networth down Na'Vi base race to victory

Fnatic ended with absolute pandemonium from the players and the crowd after Na'Vi staged an absolutely ludicrous base race.

Fnatic and the CIS team was in trouble, BIG trouble. Not only was this is a single elimination playoffs but Na'Vi were 30,000 networth down. Every single rax and fallen and every single tower as well. Only Na'Vi's throne was left standing and Fnatic were going in for the kill but Na'Vi, they decided to roll the dice, they decided to base race.

Na'Vi hadn't even killed any of Fnatic's rax but they went straight for their throne, and Dendi's clutch Divine Rapier purchase on Lina just 30 seconds before gave them the firepower they needed for the base race. While Abed and EternalEnvy were attacking Na'Vi's last remaining lifeline with Templar Assassin and Death Prophet, Dendi and his team-mates just went all in on Fnatic's throne, completely ignoring Universe, Dj and PielieDie.

It was an incredible ending to a match Na'Vi looked like they should have given up on, and the team's reaction in the clip above says it all, especially Lil's. 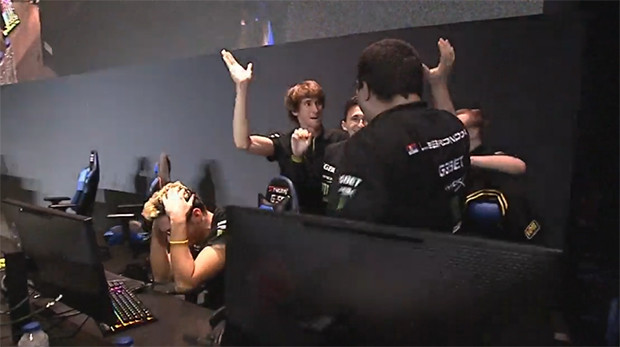