The Pro Circuit after 6 months. Two regions continue to struggle

posted by Malystryx.GDS,
It's now six months into the Pro Circuit and it's time we have another look at which regions are excelling at taking home DPC Points, and which regions are playing catch up. Team Ranking Rank Name Points Earnings 1.

3 months later and one region leads the pack
The DPC Points were introduced as part of the Pro Circuit and mean instead of teams trying to guess if they will receive a direct invite to The International based on their results, they can ensure their invite by finishing in the top 8 of the DPC Leaderboards at the end of the season.

Although we do have a few teams breaking away from the pack it is important to note that only 39% of all qualification points have been alloted, and in terms of DPC Points we're not even half-way. So far we've had 3 Majors but there are 6 still to come as well as at least 5 Minors. There is also the Major supposed to make up for Galaxy Battles II, which was stripped of Major status ahead of the event in January.

Based on current data a team would need to surpass 6,062 DPC Points to be certain of a direct invite to TI8, making Virtus.pro just 1.1K away from 100% certainty of their invite. In Europe both

Team Secret are also edging closer to ensuring their participation at TI8.

However, let's ignore teams and instead focus on regions. I did an article back in November, 3 months after the Pro Circuit began taking a look at regions and who was on top, and now we can have a look how things have changed 6 months after.

Back at the end of November only 11 teams had earned DPC Points after 5 Pro Circuit events, that number has now increased to 18 after 12 events. A total of 30 different teams have attended at least one Pro Circuit event.

3 MONTHS LATER: Comparison 27th November vs 27th February
Back on the 27th November I posted an article showing the DPC Points distribution by region, at that time Europe, China and CIS were all relatively close in the leaderboards but with 7 more events happening since then things have changed.

In terms of %'s, there have now been 35,952 Points awarded to players, and for each team their total is the combination of the three players with the highest number of points (22,764 Points).

Changes by region from 27th Nov to 27th Feb
Overall the distribution has not changed drastically despite the initial rankings done in November being heavily influenced by the only Major up until that point, ESL One Hamburg. However, the top 3 players of each European team now hold an impressive 40.2% of the total active DPC points across all regions.

Meanwhile South America has still yet to earn any DPC Points, while North America continues to lag behind with just 4.9%. China remains the regions with the most diversity, with a total of five different teams earning DPC Points. 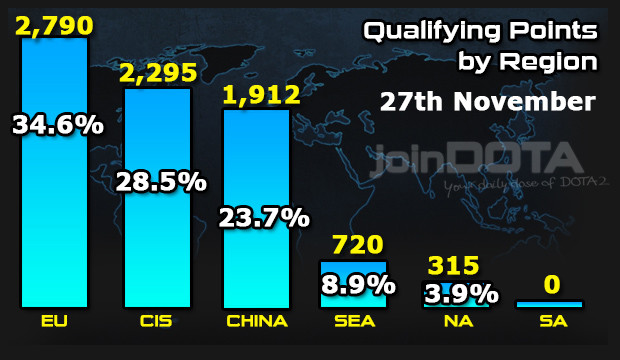 Based on the 8,052 DPC Points distributed to the top 3 players of each team on 27th November 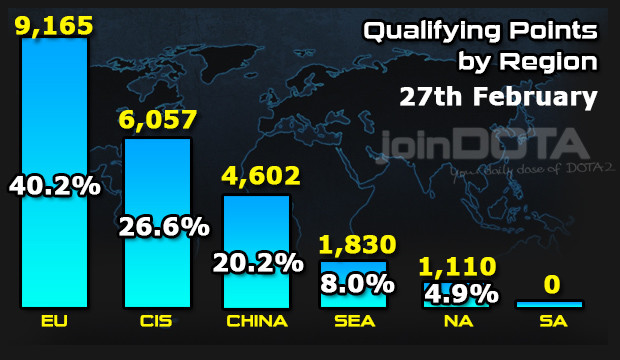 Based on the 22,764 DPC Points distributed to the top 3 players of each team on 27th February

Overall South America can be forgiven for a lack of DPC Points considering they only had 1 team at each Pro Circuit event. North America however, continues to struggle despite their Regionals being extremely competitive and Evil Geniuses receiving direct invites to many of the early Pro Circuit events. Both OpTic and Evil Geniuses will be in action at the upcoming Bucharest Major, giving their region a chance to catch up with SEA.

Which region do you see improving in the coming events?