posted by Abelle,
The TI6 Grand Final rematch in the first round of StarSeries Season 3 group B did not disappoint. DC vs Wings always a treat— Dakota (@DakotaCox) February 24, 2017


In their last meeting at ESL One Genting, Digital Chaos were able to even up their series record against Wings Gaming to three to three since The Manila Major.

Even though DC couldn't force a third game in this series, it was by no means a boring match.


The big story of Game 1 was Wings Gaming's first two picks. They delivered on their reputation for innovation, picking Invoker and Brewmaster first and astounding the panel on stream.

Is that a predictable BP that you thought? More surprise is coming up! pic.twitter.com/wv9CwAOjs7— Wings Gaming (@wingsgamingcn) February 24, 2017


The Wings Twitter account teased more surprises to come, and they might have been referring spefically to the interaction between Invoker and Brew that became apparent later in the game.

In 7.00, Icefrog made several changes to Brewmaster, but at the top of the list was a doubling of the Earth Brewling's damage to buildings.

Paired with the 115 bonus attack speed from Aghanim's Scepter Alacrity, Faith_bian melted buildings, sometimes before DC had a chance to react. 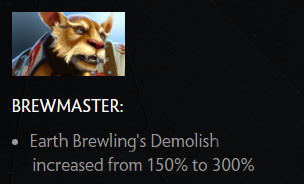 The second surprise in this draft was the Nature's Prophet, which was played by iceice. The support somehow made jungling Nature's Prophet look cool, even without the mushroom hat. He achieved this with one simple trick — teleporting to help his lanes!

In addition to his impressive team play this game, iceice even made a few solo plays including this impressive escape from Moonmeander's Clockwerk and a clutch Aegis deny.

Both teams played very well around cooldowns in this game, with Digital Chaos taking every objective they could and putting full pressure on Wings whenever Brewmaster's ultimate was on cooldown.

Similarly, Wings forced reactions whenever they could, making the late game look almost like Pong with the two teams bouncing back and forth between each other's base, taking turns to pressure each other's barracks with no time to breathe in between.

Less than 5 minutes before the game ended, it was still anyone's game. Digital Chaos had turned an almost 10k net worth lead for Wings into a minor lead for themselves, but when Wings made a final assault on the DC base they suffered heavy casualties and were forced to call GG.


Digital Chaos got off to an extremely hot start in Game 2, and it looked like the series was on track for a third game. Wings were making too many mistakes in the early game and Digital Chaos knew just what to do to capitalize.

Digital Chaos took full control of the map early on, taking a Tier 3 tower just before the 26 minute mark.

Of course, Wings are known for being able to turn around seemingly impossible leads and they held off DC for the next 15 minutes. A fight around the 40 minute mark made things look even more in the bag, giving DC an almost 25k net worth lead.

One major factor in Wings' ability to come back from such a deficit was the fact that their cores had managed to not die in most engagements. Both bLink's Ember Spirit and shadow's Terrorblade had defensive items that allowed them to get out of sticky situations, and the Wings supports were always willing to trade their lives if it meant their carry would live. 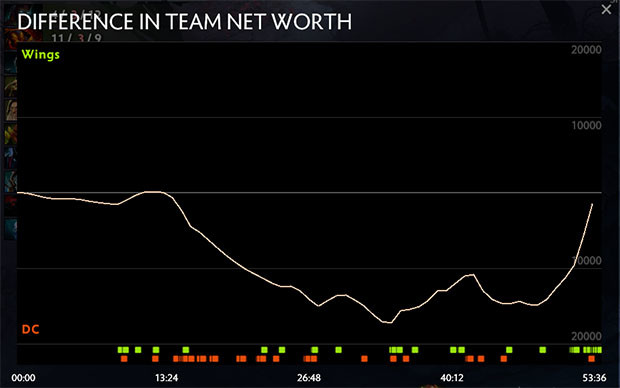 The net worth graph at the end of Game 2

At the 46 minute mark, both teams were posturing around Roshan and Resolution was caught and nuked down. With DC's carry dead for 100 seconds, Wings looked to push and either force buyback (which Reso didn't have) or take a set of barracks. Moonmeander salvaged the situation somewhat by cutting the creep wave, but Wings just turned to Rosh instead and took Aegis for Terrorblade.

That one Slark death spelled disaster for DC. Emboldened with an Aegis on their seemingly unkillable Terrorblade, Wings systematically began to take buildings and just a few minutes later DC were forced to call GG as their Tier 4 towers fell.

Perhaps this gif of Capitalist says it best: