Kim 'Febby' Yong-Min from MVP Phoenix spoke out on Twitter about his gripes with some of the commentating done during the Boston Major Regional Qualifiers, asking casters to respect players by not making their casts "black and white".

"Respect players casters, dont make casts black and white"
MVP Phoenix did not compete in the Regionals as they were one of the 8 direct invites for the Boston Major. This did not stop Febby from tuning in, and come the end of the Regionals the Korean posted his thoughts on Twitlonger, asking for less negativity from casters.

"I noticed way too much negativity towards players in the SEA/China cast. The problem is that the flames I heard were just wrong reasonings/incorrect stuff," said Febby. "people are going to think thats right too and thats what annoyed me and encouraged me to write this tweet."

The Korean paid his respects to David "Godz" Parker, who he believed remained objective. "Godz, his EU cast was perfect no negativity even if players did questionable shit, he would just theorycraft and leave it there instead of saying shit like 'I don't know what that guys doing he should have done x or y'.

"The problem with that is most of the he should have done x or y was wrong or the problem wasn't that issue but if casters talk about how they think dota should be played the player in question looks bad/not hard working."

"I dont wanna say you dont know shit casters you probably do, but most players work 10hours a day 7 days a week to make those decisions in game and they know more shit about dota than you do. Respect players casters dont make casts black and white there are a lot of viewers who listen to you like gods and are misguided most of the times." 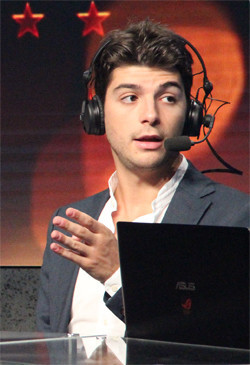 This is not the first time a player has spoken out about the quality of commentating as the demand for "casual casts" increases. Earlier this year

"I really feel like casting is getting worse everyday, with all the respect that I have for all the casters around, most of them are friends," said 7ckngMad back in January.

"Players are getting blamed constantly, half of the cast are about private jokes and just ppl telling their little stories, #notenjoyable."

When we published that story over 72% of joinDOTA users voted that they believed there were too many casual casts.

Has Febby hit the nail on the head or are casters free to say what they wish?

Do you agree with Febby? Is there too much negativity in casting?