posted by Malystryx.GDS,
We sat down with

Daryl Koh 'iceiceice' Pei Xiang during ESL One Manila to talk ESL One Manila, coaches, his new team EHOME and most importantly whether Team DK is the greatest all-star team of all time. 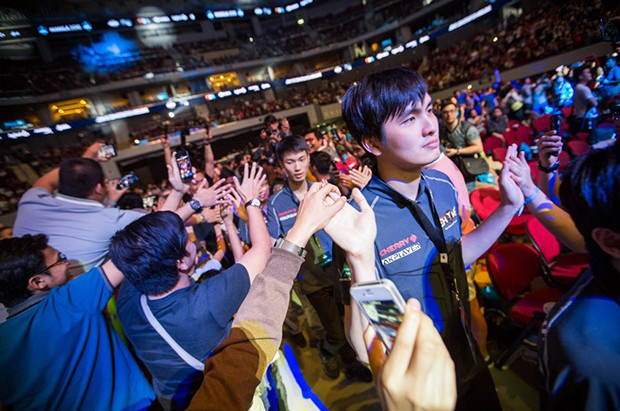 Iceiceice and EHOME enter the arena hall at the ESL One Manila (Source: ESL)

In the Spring reshuffle

EHOME, and ESL One Manila was the team's first international LAN with the new roster. Two teams who took the tournament by storm were

Team Random*, and despite a 5th-6th finish at the event IceIceice remained extremely positive of the team's future. I caught up with Iceiceice on the final day of the tournament inside the team's training room for an interview.

Malystryx: It's been a pretty unpredictable tournament for viewers. How did teams like Empire and Wings do so well at ESL One? Both reached the playoffs rather unexpectedly. Was it a fluke?

EHOME.iceiceice: I think Wings and Empire are very similar to how CDEC did in tournaments. Even VG-R, did the same thing as well. They are really hungry right now and they want to make a point. There's no pressure on them to do well or not do well, so they just play their own style and figure out the perfect style to play that will enable them to win a tournament.

I wouldn't call it a fluke but it is more of a one time thing. I'm only going to respect them if they can replicate it again in the next tournament. (So they have to get back-to-back wins..) Yes, back-to-back wins will make me respect and recognise how good they are.

Malystryx: There have only been 2-3 tournaments between each Major, that makes it pretty hard for a new team to win back-to-back, especially if they can't attend both due to scheduling or visas...

EHOME.iceiceice: There are not enough international tournaments to prove themselves and the system is pretty bad at the moment. GSL format is also the worst to be honest. I have no idea why any tournament in their right mind would use GSL format for a team game.

It's called Global Starcraft League, which means it was designed for a solo game. The real GSL has maybe 200 to 1,000 players where they need go alllllll the way from a huge number of players down to a small group. In Dota 2 there are only 16 teams, and you can be out of a tournament by just losing two matches. It's not good for viewers, it's good for the organisers.

Malystryx: I'm not sure I agree, the GSL groups are not only good for scheduling but they also make each game 'valuable' and it avoids having a team near the bottom of a standard group forfeiting or not trying because their chances of going through were reduced to 0.

EHOME.iceiceice: True, but still there is no fairness involved in the GSL format. For example some teams might be good against this team and for a team game every match-up will be different. In Starcraft, it is all about mechnical skills, that is the main deciding factor, but in Dota 2 there are different strategies, it's 5on5, and you might play bad on one day and as a result be out of the tournament. It's just not fair and it's not balanced for a team game like Dota 2. I've always found it weird.

Malystryx: What would you suggest instead?

EHOME.iceiceice: I like how they used to have round-robin, even two rounds of round-robin. (What about if they were bo1?) I think that's even better. Round-robin everybody has a chance to play everyone, you have more chances to learn and get better at the game. In round-robin it's impossible for you to lose to a level 1 Roshan and get eliminated.

Malystryx: Are there any teams not keen on this idea because they are 'saving strats' as their fans say?

Malystryx: Easily the most successful team you played for was Team DK. Recently when I think about all-star teams I think for me personally Team DK's period of dominance is still unrivaled even with Secret's success. Would you agree?

EHOME.iceiceice: I would say Team DK was the most hard working team that I have ever been in. You wouldn't believe how much hard work we put in. The best all-star team? Maybe, because the term all-star just means a team of star players right? So it was pretty all-star but it wasn't a team. Like in the NBA, the all-star team is not a team. It's just a team of players from different teams who are all the best in their roles and you put them together.

Malystryx: Recently it seems all-star teams are not certain of success, teams like Wings, Empire, the previous EHOME roster are doing well after being thrown together.

EHOME.iceiceice: Yea, they are all randomly put together. I'm pretty sure most people wouldn't be able to name half of their players, I couldn't. For Empire the only player iI know is Ramzes and from Wings I know iceice and that's it.

Iceiceice in Team DK. "Team DK was the most hard working team that I have ever been in"

Malystryx: What's wrong with the all-star team, why does it not work anymore?

EHOME.iceiceice: "I think it doesn't work anymore because of the level. If you want to win with an all-star team you really need to have players who are all of that quality. Right now there is no team with that all-star quality. The all-star teams these days are not really that "all-star". In terms of all round ability players in general aren't that good at the moment.

The only "all-star" team right now is Secret, but I don't think they are that much stronger than other players in terms of position for position. If you're going to compare the players of Secret with any other team, you're going to realise that some players on other teams are better than the players in Secret. So even Secret is not an "all-star" team, they are just a team with some really really good players.


In Team DK everyone was a little bit better than other players in their position. That's why it was a true all-star team. Right now people train really hard but in the past people were not as hard-working. MMY and Lanm were pretty much the best supports back then, Burning was good at farming and Mushi was the best mid. Me, I was a little behind Universe and Zai on the offlane. Right now it's hard to make an all-star team because people realised team-work and chemistry is actually more important.

Malystryx: What about the recent trend of investing into pubstars? Is it because they are untouched by fame?

EHOME.iceiceice: "I don't think fame influences players. People find pubstars because they are just that good. If they weren't that good they wouldn't get noticed in the first place. The new pressure might make them play even better, some players rise to the challenge.

Tong 'Mikasa' Junjie as a stand-in. It seems coaches are really crucial especially in China. what are your thoughts on coaches in the modern game?

The coach is involved after the games not during the draft, to analyse the game what is wrong what is right. In the game, in the booth for a Valve event for example, the coach is not allowed in the booth. (Should they be?) It would be nice if they were allowed.

Malystryx: The problem I see with that is if the other team does not have a coach it would technically be an disadvantage.

EHOME.iceiceice: "Yea I know what you mean, but in a time like this every team should be able to afford a coach. It would be amazing if some team can not afford to have a coach because of financial issues. That shouldn't be the case right now for a game that's so developed.

Malystryx: In terms of salary do you think a coach should get as much as a player?

EHOME.iceiceice: "Not really, I think 5-10% of the winnings would be fair along with a base salary from the team. That for me would be reasonable.


Malystryx: On the topic of your new team EHOME, what triggered you to move. Was it your finish at the Shanghai Major?

EHOME.iceiceice: VG and China not doing well at the Major was not the reason I decided to change team. I think the only possible reason to stay would be if we had won the Shanghai Majors but I doubt that was even possible at all. Even then I think I still would have changed team because there were too many differences between us, in real life as well, and we couldn't carry on being team-mates.

Malystryx: How do player moves happen in general, what is the protocol? Who contacts who?

EHOME.iceiceice: Well let's take me leaving Vici as an example. We realised what's happening, everybody wants to go their own team. We had a proper discussion, we're still friends there were no bad feelings, we just said 'ok we all agree we don't think we should play together anymore'. Once we settle that we contact the club at management level and explain the situation. Then after that we make it known that we're available.

Malystryx: How would you do that without everybody finding out the team is disbanding?

EHOME.iceiceice: Things spread because that's how it works through word of mouth. (But without a source?) Exactly, it will be a rumour and it will appear on Reddit and everywhere else.

'Okay so this player is a free agent bla bla bla'. Then offers will start coming in from other teams, you weigh up the different offers and decide which one you think suits you best, you take it and then that's it. For me it's easy, I get a good offer and I think 'Okay yea I like them' and then I say okay, and that's pretty much it.

There is a mutual understanding, a mutual interest. It's like asking a girl out on a date. You won't ask her out if you think she's going to reject you, it's the same thing here!

Malystryx: Haha. Well thanks for your time Daryl, any last words?

EHOME.iceiceice: I want to give a shoutout to our Twitter guy Josh. What else... I love eating, eating is life. Thanks to all the fans for supporting me and our team. We'll work hard to improve ourselves, that's for sure. (Perhaps wearing the ESL One Manila boxers might help?) Of course, I was going to but I need to wash them first.

Iceiceice was talking to joinDOTA at ESL's $250,000 event ESL One Manila in the Philippines.