posted by Malystryx.GDS,
The opening game of the Navi versus VG-R series was a thriller and the Bo5 Grand Final series at the Starladder Invitational ended just as it had started, on an incredible high. 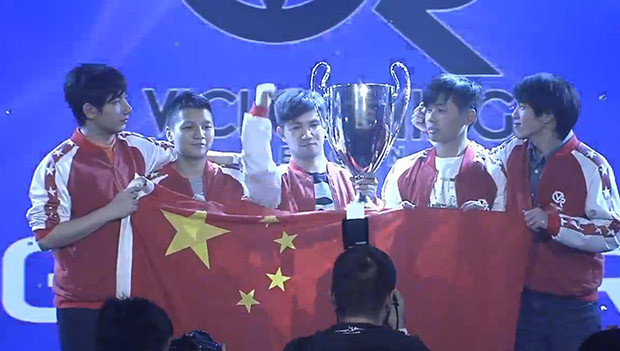 Click to view the Prologue to the Grand Final
Prologue: A perfect setting for a Grand Finals

The journey to the Grand Finals was a historic one for both teams. For VG Reborn this was their first LAN event with their new roster and since the team was rebranded. It is also the first international LAN to feature Chinese teams post-Shanghai Major. VG-R took down

MVP Phoenix* in the opening round but fell to the lower-bracket after a painful semi-final match against Navi.

They fought their way through the lower-bracket beating

PSG.LGD to finally have a rematch with Navi in the Grand Finals. The former Vici Gaming Potential

Yang 'NeverEnd' Pu had a coming of age in their run in the lower-bracket, and the team overall showed great composure and game sense, perhaps benefitting form the fact their coach Mikasa was standing in for

Navi on the other hand had an incredibly surprising run in the tournament, remaining undefeated and reaching the Grand Finals via the Winner-bracket. The Starladder Invitational was in the organisation's home city of Kiev, and coincidentally both Navi's CS:GO and Dota 2 teams were playing in Grand Finals simultaneously in two different tournaments.

Navi's Dota 2 roster's last LAN victory was D2CL Season 4 in November 2014, over 18 months ago, while VG-R could start their career together with a LAN victory. Would VG-R pull an OG and win a major event after coming from the Regional Qualifiers, or could Navi end their drought in front of a home crowd in Ukraine. 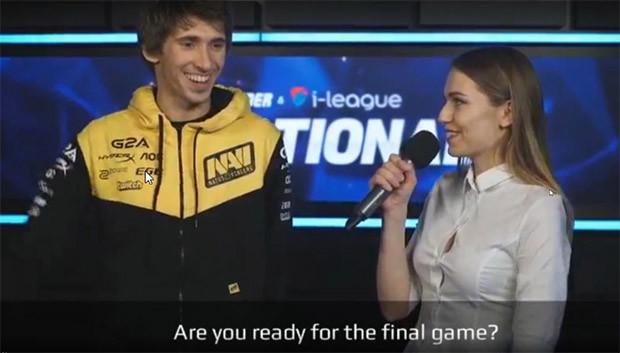 Grand Finals Game 1: Navi's Pick off versus VG-R's Team Fight
Navi went all out aggression in hame 1 securing a 7-1 lead in kills in the first ten minutes, and

VG-R's lineup of Earthshaker, Gyrocopter, Lion and Queen of Pain presented a AOE Nightmare for Navi, and the Ukranians got a taste of this when they decided to go Roshan at 15 minutes and lost four as well as giving away a free Aegis. 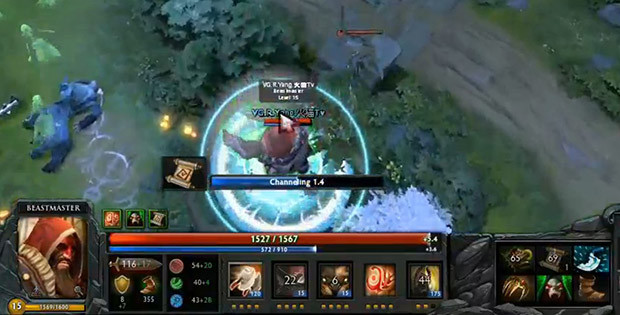 VG-R took control from this point. Navi's attempted ganks usually ended with 1 kill, but in exchange for two of their own. At 24 mins an attempted tactical pincer movement by VG-R leaving Earthshaker and QoP in the tree line while the remaining 3 players smoked almost played out beautifully, but they had not scouted out Dendi's BKB on Death Prophet. QoP and ES blinked out of the tree line to burst down Earth Spirit, but used both Echo Slam and Sonic Wave to kill just a single target. The other 3 of VG-R arrived but were too late.

Dendi's Death Prophet became extremely difficult to kill, but the AOe of VG-R was equally deadly. As the game went late a single hero Chronosphere by

Viktor 'GeneRaL' Nigrini would not suffice. Navi were on the ropes and two bad fights in the late game saw VG-R take mid rax and start on their tier 4's.

GOdz: "I am... speechless" ~ KotlGuy: "The game of the tournament so far"
What happened next was the stuff of legends,

Yang 'NeverEnd' Pu was the last man standing for VG-R after their attack on the tier 4 towers had ended in all of his team-mates falling. END still had Aegis and he stayed in Navi's base and engaged in a very drawn out battle with 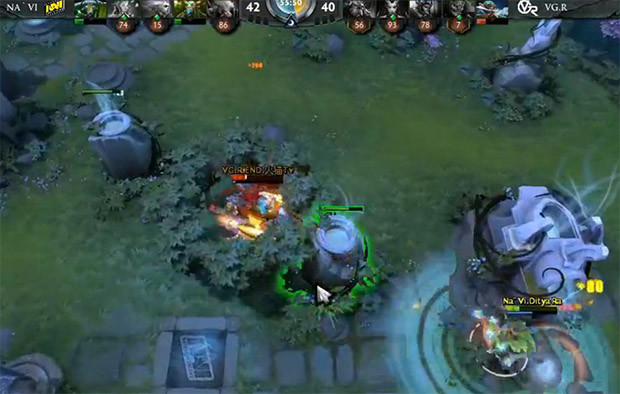 Ditya-Ra kited END so perfectly to wait for Aegis to expire. It was a gaming winning play. 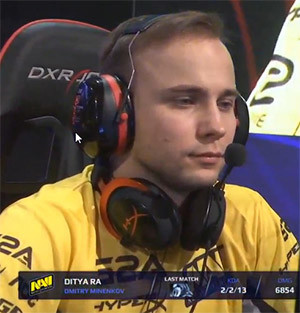 Ditya-Ra made the play of the series in Game 1
Ditya-Ra kept prolonging the engagement using Sprout and baiting the Gyro towers the bottom tier 3 rax.

After a 30-40 second fight with The Prophet it dawned on END what Ditya-Ra was doing, delaying until the Aegis expired and expire it did.

END turned to flee almost instantly it expired but it was too late, Ditya-Ra finished him off after geniously kiting the VG-R carry.

Navi raced to VG-R's base to take out their bottom and mid tier 3's while the rest of VG-R were still down.

Navi then retreated before going for the kill following a perfect 3-man Chronosphere by GeneraL to wipe out the majority of VG-R. Navi had come back from the brink of defeat to win game 1 of the bo5.

Grand Finals Game 2: Summons all round
The end of the previous game seemed to fuel the adrenaline of the opening of the second. Both teams went for a Jungler, Chen for VG-R and Enchantress for Navi, as well as a Lone Druid for VG-R and a Lycanthrope for Navi. With both sides going for summons and creeps, it was no surprise to the see game be all about the push.

It was 5-man dota and it became a struggle to keep up. Heroes were dying so fast in engagements and creeps and summons were all over the place. Navi had a good initation with Puck's Dream Coil into Invoker's AOE but as the game progressed it became far less threatening. VG-R's

Zhou 'Yang' Haiyang opted for a BLade Mail for his Spirit Bear making it even harder to kill and END was the instigator of Navi's downfall.

Dmitriy 'Ditya-Ra' Minenkov who had kept Navi in their first game on Nature's Prophet, was far less impactful on Lycanthrope. Navi conceded the second game which silenced the crowd. 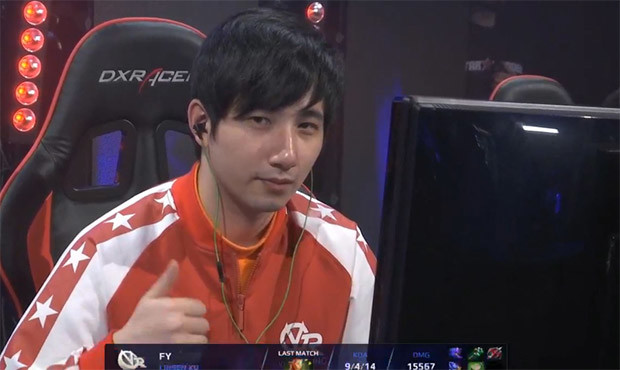 Grand Finals Game 3: Coach Mikasa steps up to the plate 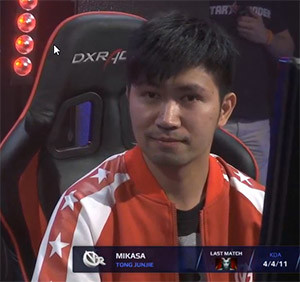 Dendi's Windranger and Ditya-Ra's Nature's Prophet were the key heroes for NAvi and VG-R after taking the lead in the mid game could have held on for the late game.

With Navi's choice to run a support Void it meant their main damage dealers were ranged and the field of battle would need to be perfectly chosen.

However, despite GeneraL landing several good Chronosphere's, Mikasa would simply blink behind and them Ultimate on Navi's backline. This would then be followed by Calldown and Gyrocopter would tidy up.

As the game dragged the gap between the two teams became unsurmountable even for Navi. Navi's ranged heroes were open season for Mikasa's Queen of Pain and Fy's Bounter Hunter had given his team the perfect start. VG-R took a 2-1 lead in the bo5 Grand Finals.

Grand Finals Game 4: Navi's Final Stand against the might of VG-R

For the fourth game in a row Navi started well but VG-R became a threat as the game hit 20-30 minutes.

Yang 'NeverEnd' Pu was on Juggernaut for this match and his farm was far superior to the Navi duo of Gyrocopter and Queen of Pain.

Zhou 'Yang' Haiyang's Nightstalker finished Aghanim's granting him increased vision, and from that point on the ganking threat of

Viktor 'GeneRaL' Nigrini's diminished. The farming discrepancy between Juggernaut and Gyrocopter was substantial, and VG-R's Juggernaut (17k) was 6K ahead of Ditya-Ra's Gyrocopter in networth at 26 minutes.

It was the first game in the series that Navi had VG-R's trademark Gyrocopter, but they could not pull of the same results. They caught a break however at 30 minutes with two buybacks from Navi helping to turn a fight at Navi's bottom rax, and Dendi's Sonic Wave and the follow up of his team-mates secured a team-wipe.

Just like in Game 1 when Ditya-Ra bought his team a window of opportunity, Navi were quick to respond in game 4 taking out VG-R's mid tier 2 as well as grabbing two more kills. Navi were now on a roll and VG-R needed to slow the game down to avoid a fifth game. 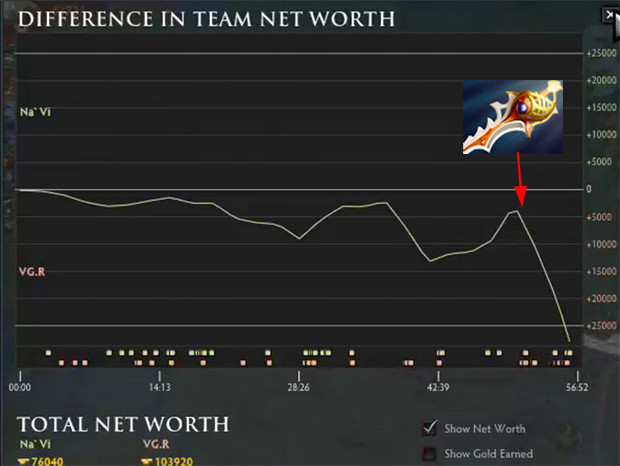 They managed to force the late game and it was not until Navi bought a Rapier on Ditya-Ra that the final roll of the dice was made and Navi had given VG-R the tools to end the series.

Leong 'ddc' Fatmeng's Swap right into the VG-R pack. VG-R now had all the cards in their hand and the end was nigh for Navi. The game ended five minutes later and Vici Gaming Reborn were crowned champions of the Starladder Invitational.

Vega Squadron *). Below are the final standings.