posted by Malystryx.GDS,
Virtus Pro were the big surprise of the Summit 4, making their way to the Grand Finals after four victories in a row in the Lower-Bracket. They led the Grand Finals 2-0 after just 58 minutes, but Evil Geniuses weren't done yet.

Virtus.Pro*'s decision to change roster has paid off ten fold, as they swatted aside Evil Geniuses in the first two games of the Grand Finals, but an Arteezy resurgence avoided a clean 3-0 ending to the Summit 4 LAN Finals. In fact the series went right down to the wire and all five games were played.

Virtus Pro hit the ground running, EG defenceless
Throughout all three opening games Evil Geniuses did not ban Shadow Fiend, which was Virtus Pro's first pick in all three games and also their strongest hero. It wasn't until the third game they actually found a way to deal with him, a testament to the confidence

Peter 'ppd' Dager had in his team.

Artour 'Arteezy' Babaev did not get going. In the opening game a wasted Scream by SumaiL's QoP resulted in an uncontested 11 minute Roshan, and in game 2 his Storm Spirit was ineffective after VP's Precision Aura boosted Shadow Fiend had the mid-lane on lockdown.

Arteezy's Windranger was underlevelled in game one, and in game two he could not survive against the "unreal damage" of the Shadow Fiend, Drow and Visage combo.

"VP is just on fire, they are showing no mercy, this is going to be 3-0 in just one hour," said Notail during game 1. "They call this savage couch, but this is savage game."

In game 1 the brute strength of Virtus Pro meant Evil Geniuses were powerless in long-drawn out fights, meaning they needed to pick their battles with Queen of Pain and Earthshaker. They were however, never given this option with no vision to pick their battle grounds. The game ended after 32 minutes, as VP secured a comfortable game 1 victory. 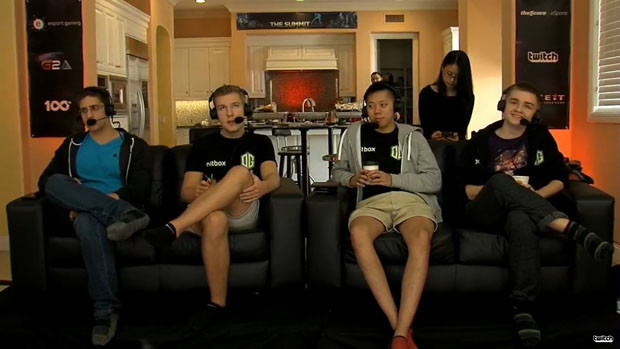 The second game was even faster lasting only 24 minutes, and Evil Geniuses only really had 2 good battles throughout the whole game, a lovely 5-man wipe at 9 minutes in and a VP jungle hunt at 20 minutes. The winning move came at 24 minutes, with FNG landing a 4-man Kinetic Field into G's Shadow Fiend ultimate near the Roshan pit resulting in Evil Geniuses calling it. 2-0 to VP after only 56 minutes of game time.

"What is going on guys, the American dream is dead," said Moonmeander, who up until this point had been quite positive about the hopes of the NA team. "As good as SumaiL is on Storm, he's going bkb, Storm just doesn't work on this patch," said BigDaddyNoTail.

EVil Geniuses crack the code and finally down the SF, twice
Game three saw a new addition to the couch, Digital Chaos'

Sam 'Bulba' Sosale who soon after appearing had the following game plan for the TI5 winners: "EG need to stalk the SF, they need to Ritsu the SF".

The couch was unsure letting Virtus Pro draft Shadow Fiend for the third game in a row was a good idea, but Evil Geniuses at least banned the Spirit Breaker in game 3. A Templar Assassin for SumaiL and a Bounty Hunter for

Clinton 'Fear' Loomis turned out to be great additions to the EG draft, and it was Arteezy in particular on dominated on Gyrocopter by the end of the game.

An emphatic win for Evil Geniuses, ending the game after 40 minutes with a 36-13 kill lead, the biggest of the series up until that point. The score in the bo5 was now 2-1 in favour of Virtus Pro.

The fourth game was much of the same, and Arteezy's Gyrocopter topped the networth chart and SumaiL's Ember was on point. It was all good for EG and even

Peter 'ppd' Dager got a mega kill streak on Dazzle. Some huge Vacuum Walls by

Saahil 'Universe' Arora gave them the edge, and EG forced a fifth and final game after drawing level 2-2. "BabyRage is here to clean up the Russians," said MoonMeander. 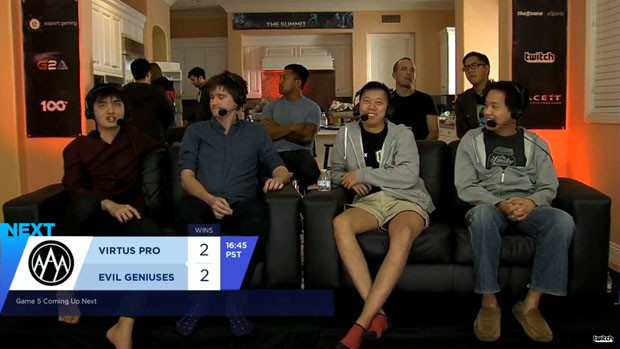 Evil Geniuses brought out an Axe and a Timbersaw in the decisive game, while

Olexandr 'DkPhobos' Kucherya had the Broodmother. "Virtus Pro went full aggro mode this game just roaming around trying to get kills. It's very hard to salvage a game against a Shadow Fiend that is leading," said Kuroky 12 minutes. Arteezy was in a really good spot on top of the networth chart, and once his SF had got the advantage, Evil Geniuses slowed down the game and let Virtus Pro come to them.

Universe had Blink Dagger and Vanguard by 15 minutes on Axe, and with Lich to boost allies armour and Vengeful Spirit to reduce the enemies', Virtus Pro were not in a good place and at a battle 18 minutes in it got a lot worse.

Virtus Pro snowballed in just below the ramp south of the Dire Secret Shop, and it was not the place to start a fight. The small choke point played in Evil Geniuses' favour, with trees for SumaiL and clustered enemies for Universe to Call and Arteezy to Raze. Virtus Pro lose four players in exchange for none and the gap between the teams grew even bigger.

A rather unfortunate lagging episode for EG worked in VP's favour, as the TI5 winners lost three only to pause the game again to rejoin in the hopes of improving the connection. Kuroky had outlined that EG's weakness was their support duo of Lich and Venge, and that VP's combo of Tusk and Dazzle would win if the game dragged out.

Sumail 'SumaiL' Syed Hassan's Timbersaw. "This is the sign of a good player, bouncing back from that Storm game, not tilting after a bad game," said MoonMeander. "If you tilt too easily you will never be the best."

SumaiL's decision to go Blink Dagger was perfect for engagements, and at 35 minutes after 10 minutes of being under the cosh from Virtus Pro, Evil Geniuses went for highground. Two sets of rax were taken soon after at 38 minutes with a 44-16 scoreline in favour of the NA team. By this point VP were just delaying the inevitable but they did not want to give up straight away.

It took 15 minutes for EG to force the gg out of Virtus Pro but they eventually did. Evil Geniuses had come back from 0-2 down to win 3-2, to become the first ever double Summit winners.

Moonmeander and Kuroky complimented Virtus Pro on just how well they've improved during the course of the tournament. "Most players knew VP were going to be up there," said Kuroky. Their run through the lower-bracket was remarkable, but hats off to Evil Geniuses who displayed amazing resilience.