Team Kinguin*, will be our final contender at The Defense 5 LAN finals that are going to be held this weekend in joinDOTA HQ. They will join the likes of

Team Liquid in a battle for over $77,000 and the prestigious title. 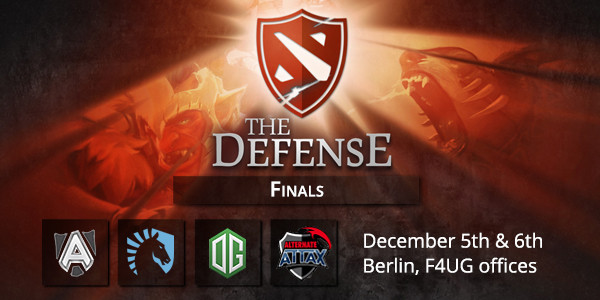 Vega Squadron * currently in Lithuania for GameShow, the second spot from Group B, and a chance to compete against the winners of the Frankfurt Major on LAN presented itself. Team Alternate surprised by reaching Stage 2 of the Defense Season V, taking games off Virtus Pro and Team Empire.

No matter how skilled the players might be, the most important thing for inexperienced team, like we are, is to prove to everybody (ourself including) what we are capable of. Advancing to phase 2 of The Defense was already more than most people would expect from us.

Now we received a chance to play in a great LAN event and we are not going to waste it. Our previous experience shows that Alternate performs much better in a LAN environment compared to online matches – we are glad that finally we will have a chance to confirm that playing against some top tier teams.
- Adam "shiru" Półtorak, ATN's manager

Alternate is a Polish team who have climbed the ladder in the Dota 2 competitive scene from the very bottom fighting in for example in joinDOTA League at first. Recently they have been able to constantly take games of the best teams in the world and now will have a chance to show their talent in a LAN environment.

The Defense 5 will go down on the weekend of December 5th & 6th in a double elimination, best of three format with four teams participating. All the action will of course be brought to you by joinDOTA commentary team. The atmosphere of the event is shaping up to be even better than the one during D2CL 5 (which was also held in joinDOTA HQ) where some legendary memes