Moonduck Studios adds Pitlord to the game! ... but only for the draft

posted by SephyStars,
Pit Lord makes a surprising appearance in Moonduck's elimination mode in game 4 of the Grand Finals between DC vs 4C&L. Even the Moonduck coverage team were left wanting for words in an attempt to analyse the teams' picks. Though it generated a lot of excitement, viewers were left wanting when it turned out to be a cleverly disguised Brewmaster. The stunt garnered a lot of traction, increasing viewership on Twitch by about 10,000. 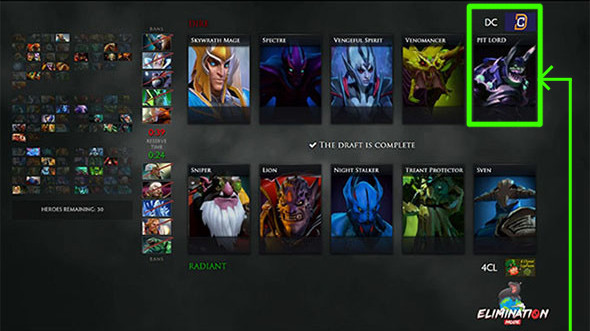 Popular opinion at the time pointed to Sir Action Slacks as the orchestrator of this unsettling prank. Slacks remained composed while his colleagues were on the whole confused about the sudden appearance of Pit Lord. Some even pointed out how badly the Pit Lord portrait had been animated, noting that the image was simply expanded and contracted to make it appear as though it was breathing. Moonduck eventually revealed that the goof was the work of bukka, their web developer.


Though not a legitimate drafting choice, Pit Lord wasn't the only surprising pick during this tournament; yesterday Oracle was drafted by

ROOT Gaming* in their match against

Planet Odd*. Oracle hasn't really seen any professional play but such is the nature of this tournament where the new elimination mode has been adopted.

In this game mode heroes only get one appearance maximum per series, so a wide array of team formations are to be expected. You can read more about this tournament and the game's rules here.

While Pit Lord has a variety of spells ranging from disables to damage over time, what makes him truly exciting is his global ultimate: Dark Rift. This ability allows Pit Lord and all of his allies to teleport to a friendly creep or tower.

Think of it like Boots Of Travel on steroids. With patch 6.85 on the horizon there's always the chance Pit Lord - or even Arc Warden - might get their big announcement. However, with Icefrog's recent announcement that we'll see mostly balance changes next week, the likelihood of new heroes seems slim.

IF Pitlord really HAD been added, what would have been your reaction?