posted by skyking00,
ProDotA has announced a National DotA 2 Cup set to take place later this month and amongst these experienced players are

Sergey 'God' Bragin playing for Team Russia. Team Russia already looks the strongest by far, and with the American roster a farcry from what it could have been, it might be up to Resolution and Ukraine to stop them. 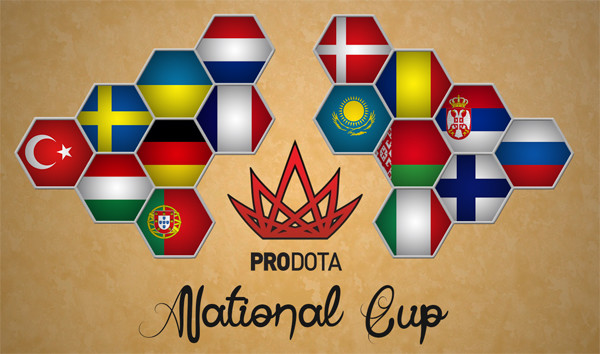 This has been in the works for more than 3 or 4 months, with the organisers hard at work during that time trying to secure enough well-known players for each nation. Germany for example had Black as a captain in one of their initial team drafts but with his move to Malaysia to play for Fnatic it comes as no surprise to see him not in the Germany roster anymore.

ProDotA is still currently a relatively small organization but they have succeeded in their previous tournaments such as the three seasons of Hitbox EU Championship and the ProDotA Cup sponsored by Twitch. The first season will be purely online, however, the organisers have high hopes they might be able to turn this into a LAN event in future seasons.

Russia looks strongest but Resolution and Ukraine might be up for the challenge
Considering the strength of some of the other nations, Russia at the moment looks the most deadly as it includes VP's

Roman 'Resolut1on' Fominok is set to be the captain of Team Ukraine. Ukraine has an unbelievable depth in players, and although the roster is yet to be announced, the strength of the current Russian squad might tempt some experienced players to fight for their nation.

The Format of the NationsCUp
The tournament features 16 invited teams consisting of both new and experienced players. Captains were chosen who then had to find four players to play for their nation. The group stages will be held from September 21st till the 28th, tiebreakers from September 30th-October 2nd and the main event will run from October 3rd - 12th.

The 16 teams will be divided into 4 groups to play in a round-robin which decides who advances to the main event where they will face against each other in a double elimination format. The tournament's prize pool starts at US$10,000 with an addition of 10% from ticket sales. Only the top 3 teams will obtain a sum of the prize money, with the first place receiving 70%, 20% for the second place, and the leftover 10% for the third place.

The 16 invited teams are:

To read more about the tournament you can head to their website.