posted by Malystryx.GDS,
The FACEIT Pro League was involved in an incident late last night, which has resulted in

Justin 'Justin' Roselle being banned from the league, and

Mark 'Tralf' Seidl being left to the mercy of fellow players to decide whether he can continue competing. The stream sniping incident came to light after it was made apparent that Justin could be overheard on ixMike's stream giving information about the enemy team during a pause.

The conversation between the pair during an FPL game on ixMike's stream went as follows:

Tralf: "Is he streaming, did his stream go down?"
Justin: "He wasn't streaming. (silence). Ok stream sniping guys(sound of typing), alright checking their wards let's see what they got. They got nothing, they got one in our base."
Tralf: "Consider it countered."

The incident has resulted in Justin's being banned and with only 5 days until the end of the season it is very poor time to be caught stream sniping, especially considering that if he kept his second place in the division he would have won $1,000. According to Mikey from FACEIT, Ixmike banned Justin straight after the game ended. 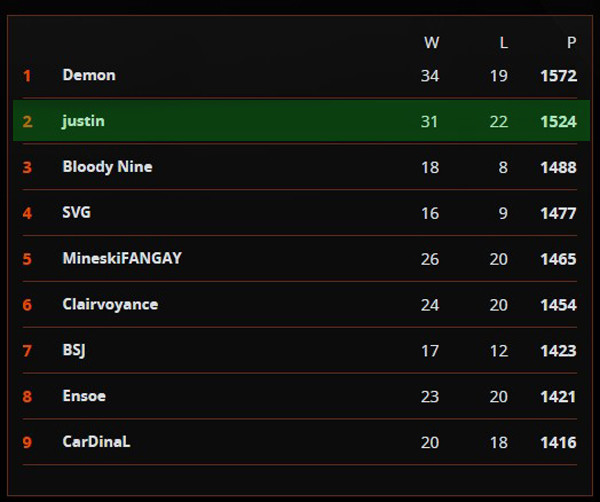 Justin was 2nd in the division, if he kept his place he would have won $1,000

FACEIT have also decided that there may be consequences for Tralf as well. As far as they are concerned his comments although perhaps sarcastic are considered "participation". He was also issued a ban, although it is temporary, pending a decision from the "council", an anonymous collection of the most respected players in the league who will decide whether he can stay or not.

FACEIT prides itself on a "tribal system" in which the players run the league, and can decide amongst themselves to punish a player if they consider him toxic or troublesome. Proof of this can be seen in an incident we reported on a few months ago, where

Eric 'Ryoya' Dong to a "1on1 unvouch match" to resolve a dispute that happened in a previous match.

Despite the current situation

I didn't realize that my sarcastic tone came across as serious - I was asking first if Arteezy was streaming, because I didn't know why he dc'd and thought if he DC'd from lag that his stream would be down. It was Justin who said Demon was streaming - yes I did say "consider it countered" but I was completely joking and I never countered it nor was that information pertinent at all. (...)
Segment of Tralf's reaction to the incident on Reddit

I completely didn't even stream snipe, I was talking sarcastically the whole time. This is why I acted surprised when Justin went into 1/2

Full detail about ward spots, where they were etc. and didn't even counter them. This is honestly laughable to me

It is not the kind of publicity the FPL needs with them so close to the end of the season, and FACEIT's Mikey shared his feelings on the incident:

Im deeply sad 2nd ranked player of FPL NA (justin) conducted streamsniping, cause for him the money is actually on the line. Sorry everyone for this behavior, even though this belongs to FPL to solve internally i want to apologize to everyone in NA scene because this really reflects bad on other players and whole NA scene/community aswell. There are many extraordinary talented players and people here and it's just terrible to see their scene gets pulled trough the mud because of the actions of individuals.

You can read the FPL's official standpoint on the incident here.

Do you think this is a fair punishment?