TI5 Metagame: Our one-stop guide to which heroes won the groupstages

posted by Gorgon the Wonder Cow,
Metagame is a complicated web of value and evaluation, with each team trying to determine the balance between denying opponents effective heroes without losing their own. Every major tournament sees metagame shifts in hero, strategy, itemization, and laning popularities, but The International traditionally has a larger impact. Which heroes were most valued and which were most effective? 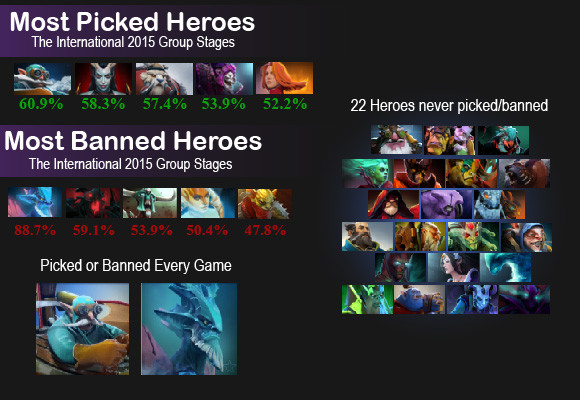 Some aspects of the Metagame seem fixed (for the time being) regardless of how strategies begin to mold. Shadow Fiend and Storm Spirit, for example, have enjoyed a strong presence in pro meta since the DAC last February—both of these heroes were heavily influenced by

Artour 'Arteezy' Babaev, who together really helped usher in their popularity. Both did feature small dips in recent weeks, but largely because top-tier teams with signature players were inactive during that time.

The comeback kid, Undying’s winrate steadily dropped since the last subpatch, which stacked another nerf (reduced Tombstone HP) on top of the four large nerfs from 6.84B. That all changed this week with a sudden spike in winrate, picks, and bans bringing him close to his all-time record in all three categories of influence. Thank

Liu 'garder' Xinzhou for the rising of the undead; he was the first to play the hero multiple games in the group stages and has the most Undying games so far in TI5.

Dazzle is a case of slow but steady growth, coming in with a negligible presence in 6.84 he has been growing reliably since the first week of this patch.

Although the only direct buff he received was a slight top-level poison touch damage increase, the meta change into more aggressive, burst-damage cores such as Lina, Queen of Pain, Leshrac, and Storm Spirit alongside a drop in Blink Dagger purchases have aided Dazzle’s rise. Two weeks before The International Dazzle’s ban rate eclipsed his pick rate, implying that he may have been capping out. However,

as his ban rate dropped during the qualifiers his pick rate rose back to its former peak around 55%. 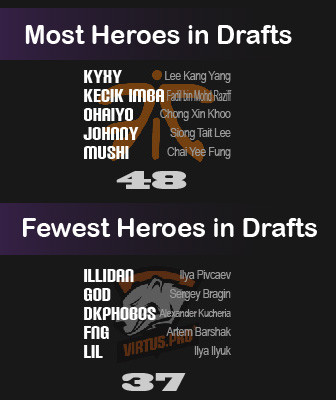 , including the BTS Americas, Esportal, Dota Pit League, and a touch at ESL One Frankfurt. However, heroes who show small popularity surges in much smaller tournaments typically don’t translate to big impacts in major tournaments like The International because the teams are completely different. Naga has hit a stride, though, and with a very solid 58.6% winrate so far, it’s unlikely that she will be falling off during the main event brackets.

Her value as a late-game force is eclipsed by her ability to restart or set up engagements in a meta increasingly built around AOE skills such as Scream of Pain, Tombstone, Calldown, Bloodrite, Weave, Pulse Nova, and so on.

I also just want to point out how many of the unpicked heroes have been popular in the last year: Juggernaut, Faceless Void, Mirana (the most played hero and most successful hero of 2013), Medusa, Necrophos, Sniper, Doom, Death Prophet, Ogre Magi, and Jakiro have all been top-tier picks as recently as last The International and all have dropped so far off the radar they didn’t get a single pick or ban in the groupstages.

Personally, I would love to see one team in the grand finals pick all heroes who were unplayed in the group stages. Warlock, Mirana, Death Prophet, Medusa, and the return of the offlane Faceless Void. Make it happen.

I’ve discussed hero value before, and I’ve repeated past procedures here. Basically, heroes are scored based on how early in the draft they are prioritized. A banned hero counts for both teams while a picked hero counts only for the team which choses it. This provides a more accurate representation of hero evaluation than pure pick/ban percentage without overly reducing the impact of bans in the scale.

Here is the exact formula for this figure, so you know exactly how each position in the draft is weighed:

Traditionally at least a third of the most valued heroes are supports at any given time, with several supports usually taking up the bulk of the second ban phase and early picks.

However, a semi-support Tuskar/Bounty Hunter and a not-often support Naga Siren are the closest the group stages had on their top 10 list.

This just goes to show how important a single strong engaging hero alongside AOE cores are to pro's current perception of the game.

I don’t think there are any surprises on this list: Gyrocopter, Storm Spirit, and Templar Assassin all wield a very aggressive, forthright playstyle which creates space by the truckload. They are also fairly versatile for their allies and opponents and are mechanically strong (especially Storm, who is in my opinion one of the most mechanically overpowering heroes on this patch).

Bounty Hunter may be a touch of a surprise for some, but when you consider that

, it makes plenty of sense. Bounty Hunter also provides vision advantage to a team. Vision is a very high-value commodity for pro games (just remember Night Stalker/Tuskar as a combination from a few months ago).

Io is always strong. Io will always be strong. There can only be one.

Techies is played just often enough to have a large impact but not often enough to be spammed when he isn’t appropriate for the game. All this means is that his numbers reflect a niche value which is very reliable when executed, especially since only a few teams use him at the moment. He, too, provides good vision advantage.

Bloodseeker is the only hero in the top 10 most valued by drafts who is also in the bottom 10 points netted.

. Note that unless a hero loses every game he plays, odds are the most negative heroes will also be some of the most popular because to get a huge negative point sum you need to actually play and lose quite a few games.

That being said, I'm surprised by Rubick's lackluster performance since he is traditionally a stronger, more valued and effective support (especially in China).

Winter Wyvern and Razor, as two heroes who have seen a surge coming into this event, seem to be particularly lackluster int he execution department.