Line-ups for the TI5 All-star match are out, BigDaddy and Chuan the captains

posted by Malystryx.GDS,
The two line-ups for the All-Star match at The International 5 have now been decided, with Cloud9's

Clement 'Puppey' Ivanov. We're interested to hear your thoughts on which team you will be supporting. 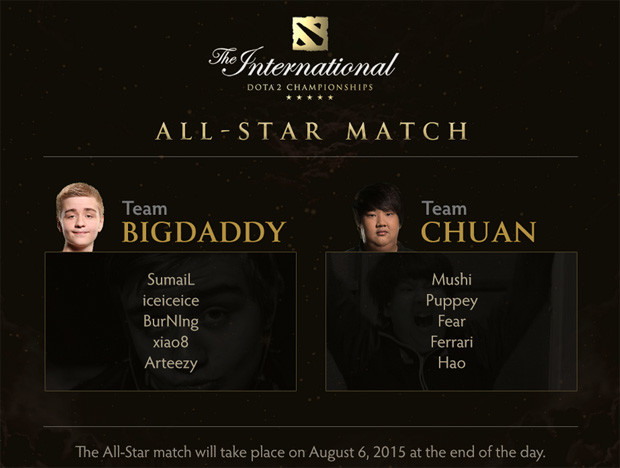 BigDaddy was on the winning team last year, Team Rotk, who played against Team XBOCT in the best-of-1 which was also the grand reveal of Valve's new hero Techies. Six of the twelve players involved last year make a return at the TI5 showmatch, with notable absentees being

Gustav 's4' Magnusson who did not make the selection.

The players were decided via a public vote in the TI5 Compendium, and the All-star match will be played on the 6th August, the fourth day of the main event.

The TI5 All-Star Match rosters
The team with the most representatives at this year's All-Star match is Invictus Gaming who have three players involved; Chuan, BurNing and Ferrari.

Which all-star team are you most looking forward to watching?

The All-Star match at TI4 - Team Rotk vs Team XBOCT