Huge changes to TI5 format: 16 teams at main event instead of 8

posted by Malystryx.GDS,
Details of the format for the upcoming International 5 have appeared on the Dota 2 website under the replays tab, and it appears we will see very significant change in the format from last year. The teams will now not only be divided into two groups but more important no team will be eliminated by the end of the groupstage. Instead they will be fighting for a place in the winner's bracket just like at TI2 and TI3.

At this year's International, no team will be eliminated during the groupstage

Groupstages - A change from TI4 but same as TI2/TI3
TI4's format: At last year's International 16 teams competed in a single group and played each other only once. The top 2 teams advanced to the upper bracket while the other 8 entered Phase 3, a seeded bubble-race playoffs, with two teams eliminated, leaving eight teams entering the main event.

TI5's format This year there is an immense change in the format with Valve reverting the groupstage format of TI2 and TI3, with the number of teams at the main event doubling from 8 to 16. Instead of one big group like at TI4 Valve will split the teams into two groups of eight, and is changing the best-of-1 format to a best-of-2. - A 2-0 win provides 3 points, 1-1 provides 1 point, and 0-2 provides 0 points.

Group standings will be of the upmost importance at TI5, as the top 4 secure a place in the winner's bracket, while the bottom 4 head to the lower-bracket. The groups are set for the 27th-30th July, with the wildcard a double elimination played the day before on Sunday 26th. Two teams from the wildcard will progress to the groupstages.

The rest of the main event except the Grand Finals are best-of-3, meaning the remaining 12 teams will carry on through the playoffs, with the teams getting a top 4 placement in the groupstages having an extra lifeline at the main event. The Grand Finals will be a best-of-5, with no winner's bracket advantage. 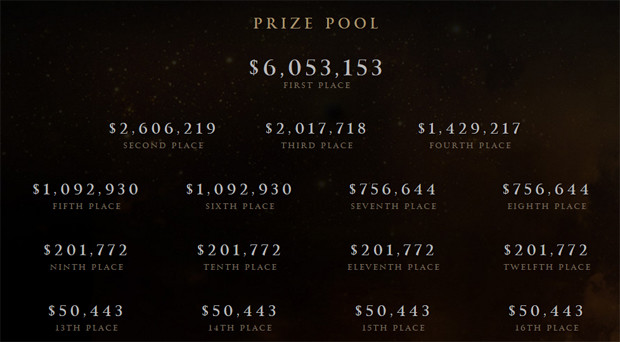 Another change is in regards to prize money, with now no team going home empty handed. What is more the distribution has been changed to give bigger rewards for the teams who finish in 2nd and 3rd place. At TI4 Newbee took home 46% of the prize pool, at TI5 the winners will take home "only" 36%. A top 8 finish will secure a team over $700,000 at least, well above a 1st place finish at any major tournament outside of DAC.

Glad TI is finally paying teams for their hard work for the year instead of just the winning teams.

Reddit user /u/sbx320 put the changes in context by comparing them to TI4: 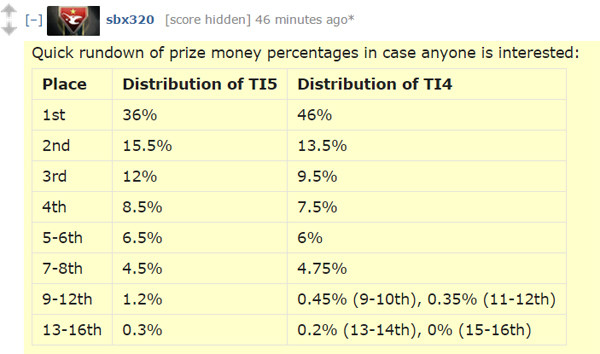 An improvement on TI2 and TI3
Although if we compare it to last year the changes seem immense, they are not unfamiliar given the exact same groupstage format was run at TI2 and TI3, with 16 teams at the main event. However at both TI2 and TI3 the lower-bracket featured more rounds that were best-of-1, something Valve has abolished in the upcoming format for TI5, with only a single round deciding by only one game. With prize money also more evenly distributed, it appears the voices of the community were heard.