6.84 Changelog interview and analysis with Aui_2000, Blitz and Luminous!

posted by woodshrew,
We sat down with

William 'Blitz' Lee and David "Luminous" Zhang through their marathon 6.84 patch log analysis. After they scoured the new changelog for the first time, joinDOTA got their thoughts and feelings about the ground-breaking patch after the long awaited release. Read on to hear their closing thoughts on the night of the release of 6.84!

[quote]Lumi: “I don't remember ever reading a patch this OP...”
Blitz: "Blitzdota is done."
Aui_2000: "Visage is back. I'm happy."
[/quote]
Hours after the patch dropped Monday night, our community's panel of patch analysts gathered to share their views on Icefrog's 6.84 DotA. With Kurtis scrambling to finish his dinner, Blitz rolling out of bed 4 in the morning, Berlin time, the boys worked through page after page of changes. After Blitz, Lumi and Aui_2000 covered nearly every detail of 6.84, joinDOTA's Ying "woodshrew" Sun caught up with them to hear their final thoughts and opinions on DotA 2's new facelift.

woodshrew: What was the the worst thing about playing public games last patch? Kurtis what was the most frustrating part in terms of the professional scene?

Aui_2000: The worst part about pubs in the last patch was that the skill level necessary to play the strongest heroes felt very low. Pretty much every "imba" pub hero became extremely streamlined with little to no decision-making but people could still get 6k+ with them; the skill/teamwork requirements to shut down Lina/Storm/Troll/Sniper etc, was exponentially higher than the play requirement.

This combined with the fact that early pressure in pubs meant a lot less due to comeback mechanics and allies not being able to properly close out games made for a very frustrating pub experience. I did not really have a problem with the pro scene this patch.

Blitz: Roshan being so weak and multiple heroes being able to exploit it. I felt that the game was so centered around that-- Storm was strong though so I can’t complain.

Lumi: I didn't have trouble playing against Troll/Sniper/Axe/Lina. Since you lost so many agames against these heroes, you learned counters. My main problem was you kept seeing the same heroes. I don't remember the last time you saw Tusk...Prophet--it was a bit stale. Hopefully we don't see 6.84 develop the same way.

woodshrew: How will 6.83 go down in history in terms of balance? Were the rubber-band game mechanics exaggerated?

Aui_2000: People overrated the gold comeback mechanic for sure. EXP was too high though in my opinion. I think in terms of future remembrance, people will group 6.82 and 6.83 together and sort of laugh at the comeback mechanic, which is unfortunate because I think 6.83 brought a lot of really great games.

Blitz: I think 6.83 was interesting in that people had to develop some weird late game stuff centered around trying to hold high ground but I think it wasn’t as bad as a lot of people stated.

Lumi: I think a lot of people had a misunderstanding of the (comeback) equation. I don't think it was such a big deal, but it needed some refinement. Funny thing is, 2 months ago we didn't see Troll/Juggernaut/Axe, but towards the end that's all we saw. You see variety in the beginning and near the end you see the same thing and that's a good time for a patch to come out.

woodshrew: Let's get straight to it. With balances to how buy-backs work, and the changes to AOE gold and XP bounties, has rubber-banding been effectively balanced?

Aui_2000: How buy-back functioned with comeback mechanics was singlehandedly the biggest problem in 6.83 in my opinion. I think with this (6.83) patch a lot of people misattributed inability to break base to the rubber band mechanic, when in the large majority of those cases the comeback mechanics were not the main reason they lost. This is not the first patch where an early game dominant lineup crushes, but has no push and eventually loses the game. Draft better and play better--some teams have had no problem transitioning from an early lead to ending games early.

Blitz: I think so, but I have to play it to see. Buy-back was nerfed and so I’m excited to see that, I thought the fact that you could buy-back and come back on top of what you lost was sort of a silly mechanic.

Lumi: I think I have to see to have a good feel. I thought buy-back was buffed. In public games poeple misuse buy-backs and you're stranded and can't farm. In the new patch you can still take 40% farm. But like Aui said, you take the farm away from your team. I don't yet have a good grasp in terms of how the new buy-backs will work.

woodshrew: How do you feel about the changes for the Big Two: Troll and Sniper?

Aui_2000: I think the two biggest problems with the heroes were their laning abilities. I think Troll lost a lot there, as 15 base damage and unobstructed vision are both huge. Sniper probably still has a more significant place as Shrapnel is still one of the best skills in the game and he is specifically good against some of the heroes that are looking strong, like Leshrac (not completely sure if true with the MOM nerf but Shrapnel eats running heroes alive)

Blitz: I think Sniper might still be playable, and Troll maybe got over-nerfed. I feel with the nerf to Quelling blade and something like nerfing his ultimate might have been okay but this feels like a bit of an overreaction.

Lumi: I think the heroes are still very playable. I think Sniper is a very good laner and insanely good at high-ground defence. And Juggernaut has utility with Healing Wards and high damage output. I think the biggest nerf is the Mask of Madness and taking away movement speed, and Quelling blade for Juggernaut and Roshan. Both are still playable, but who knows how new items will affect them.

woodshrew: Will aggressive team playstyles be favored with the change to kill bounties, and the decreased economic value of lane creeps?

Blitz: Yeah, ganking in the early game at the very least will be impacted. It’ll actually allow lvl 1-2 heroes to have impact in the latter stages of the game.

Lumi: I'm all for it. But who knows how the game will respond, we'll wait and see. The big buffs to the late game with heroes changes, combining item slots, and extending slots. Like Guardian Greeves, and Moon Shards are the 7th slot. On one hand you want the game to go faster, but if it goes late it can go really late.

woodshrew: Which of the new items do you predict will be most impactful? Most potential in professional play?

Aui_2000: Break from Silver Edge seems like an incredibly strong mechanic on an item with pretty good stats. The Medallion upgrade also seems extremely strong. I also think Glimmer Cape has some cool applications but they don’t seem as straight-up impactful as the other two items.

Blitz: Silver Edge seems really strong, especially in pub play. In competitive play its hard to anticipate but the change to the boots might be the largest change.

Lumi: Right from the go-- Silver Edge. Most raw potential. Most pubstomp ability. In terms of pro games, Solar Crest for mid game damage, or maybe more likely, the Lotus Orb, and the ability to take away Hexes form allies. Spell return not as big perhaps, but debuffing an ally is another alternative to BKB and Eul's which are the most popular items in pro games.

woodshrew: Roshan-centered drafts have been a priority for a long time. Has this dynamic been altered notably?

Aui_2000: I think Roshan still dies too fast and will continue to be a focal point of the game.

Blitz: In some ways, just because of how as a carry you can teleport in directly towards your team, whereas being out of position split pushing before meant you had to have a tower up or bust.

woodshrew: Some have already noticed improvements in quality of life for supports. Kurtis, do you think this patch will be beneficial to support play?

Aui_2000: Supports who survive fights will be rich and will have room to carry tps after 30 minutes which is great.

Blitz: In some ways, but it feels like the new items make dying as a support even easier!

Lumi: I think there's a ton of small things here and there. Ward efficiency with slots, I think you get bounty for dewarding. I was thinking about a sick play: you drop a Sentry Ward, Tango it... but who even knows. It's all these small things, and I like how you have many more choices in the lower end of the item pool-- you used to have 2k gold and buy Mek or Force Staff, but now you can look at other things, like Medallion upgrade, new Vlad's, Veil and Rod of Atos. 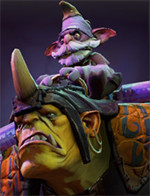 woodshrew: Hero who will see the biggest jump in popularity?

Aui_2000: Oracle is so dumb. In Captain's Mode maybe Leshrac or Dragon Knight. But those are both probably because of how unpicked they are now.

Blitz: I think Alchemist just because of the funny factor of being able to convert gold into Aghanihm's.

Lumi: Im hoping Alchemist. I mean he does two things: The bounty buff itself is deserving to look at. You earn four times as much gold. The whole Aghanihm's thing is completely ridiculous. It opens up more drafting ideas and allows people to be more creative.

Aui_2000:I am both scared and excited for every patch. The Dota meta-game also evolves alongside the patch which makes it even more dynamic and unpredictable. Hohohaha wasn’t regarded as a top hero until very far into DAC and even then felt like more of a VG specific thing until games started after the tournament. Every new Dota patch I learn a ton of new things and picks go crazy which will hopefully make for a great playing/viewing experience.

Blitz: I’m always excited for new patches and changes. Regardless of the direction it goes, it’ll at least be new and fresh and something different for us to all complain about.

Lumi: ...There were big changes back in the day. Blink dagger changes, TP scroll invulnerability buffs onto buildings. Those were individual changes in a patch, but I think this particular patch, not only do you have gold changes, Break vs Mute, new items ... when you add 2 new items, it's huge. But now you added 8 new items and combining item slots.

Many thanks for Kurtis, David and William for taking the time to both do the patch vlog and also the post-interview.