Invictus Gaming topple an Empire and claim the MAS championship!

Team Empire to claim the Major All Stars title, taking home $46,962.45. The grand final, which was played in Malaysia earlier today, saw iG take a 2-0 victory in a Best-of-3 against Empire after defeating the European squad 2-1 in the Winners Bracket Final.

Wheat before a scythe! - Game One

Invictus Gaming got off to a great start, with

Maxim 'yoky' Kim's Magnus with triple raze and denying himself to Roshan.

Luo 'Xi' Yinqi's Axe rotated into the jungle early and was left undisturbed, a decision that turned out to be fatal for Empire. Axe bought his blink dagger at the 9-minute mark and immediately rotated to get a kill on

Roman 'Resolut1on' Fominok's Medusa. The fast blink on Axe proved crucial as iG was able to exert pressure on the entire map, picking off Brewmaster and Dazzle more than once. At 15 minutes, all 3 of iG's cores dominated the net worth chart. With unrelenting pressure and great map vision, iG took an uncontested Roshan at 21 minutes, consolidating their 12000 gold and equally sizable experience lead.

iG's carry players made quick work of Empire
In the next 10 minutes, iG chose to play rather conservatively, farming the map and starving Empire. Luo still kept up his phenomenal performance, with great blinks and force staffs into Berserker's Calls and securing pickoffs. Earthshaker bought his Blink Dagger but Empire was so far behind that it had little impact. iG won the next fight rather easily, taking the middle lane barracks and proceeded to claim another free Roshan, again the Aegis was put of Shadow Fiend. At 36 minutes, iG walked into the Dire's base and quickly decimated Empire's line-up, securing the first game of the Bo3.

All in all, every position on iG played extremely well. MVP of this map certainly goes to Xi (Luo). His early Blink Dagger and aggressive plays put immense pressure on Empire, netting important kills and creating a lot of space for Morphling. Ending the game with K/D/A of 14/0/5, Luo's spectacular performance gave iG the 1-0 lead.

Xu 'BurNIng' Zhilei's Juggernaut 2 minutes into the game, who fell again within the next minute. Top lane was almost lost for iG as BurNing had only 8 creep kills. Luo continued to deliver with a 9-minute Blink Dagger and immediately moved around the map, looking for kills and creating space for Jugg who had a very long road to recovery. Mid game was explosive as core heroes of both teams got picked off with the help of numerous blink daggers on initiators. Nobody was safe. 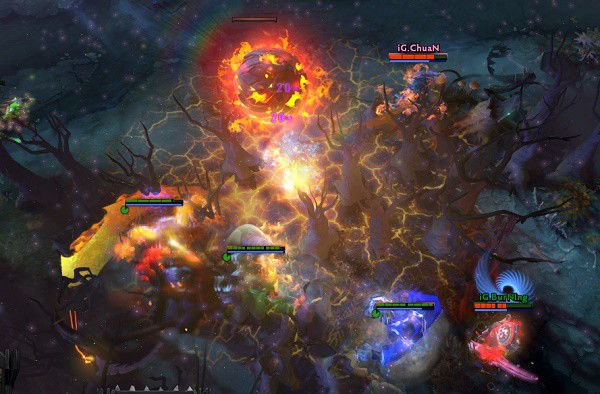 iG's team-fight was formidable
The turning point came at the 22-minute mark, when a prolonged team-fight with multiple buybacks saw Empire killing Roshan, but brilliant play from Ferrari_430 and Luo salvaged the situation, with Queen of Pain snatching the Aegis even though it was used right afterward. Empire tried to march down tier 3 tower mid, but excellent initiation from Shadow Shaman and Axe resulted in a huge fight for iG, with Templar Assasin and Rubick being killed and Radiant's tier 2 mid tower getting destroyed. 44 minutes, another great fight for iG saw Brew, Rubick and Batrider dead and iG took Roshan uncontested. 2 minutes later, a crucial skirmish took place as Brew and Batrider were killed without buyback. iG took top set of barracks and mid melee barracks. iG was so close to championship but decided to play safe. With the next Aegis on Jugg, they picked off Brewmaster, smoked mid and took the throne.

Overall, it was a very solid performance from iG. Empire held the lead pretty much the first 40 minutes, but superior decision-making and initiation helped iG held the ground and turned the tide. Winning the series 2-0, iG established themselves as a dominant force, dropping only one map in the entire tournament. With every position performing extremely well, it is safe to say that the old giant has finally wakened. 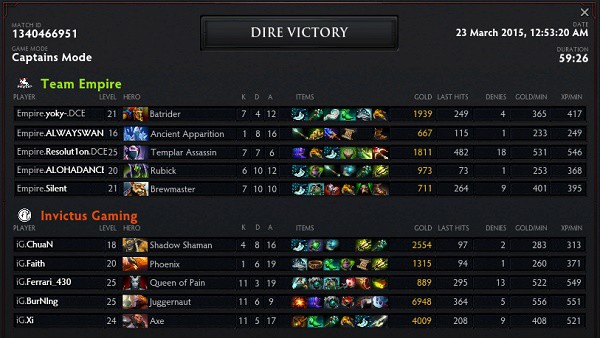