What happened to w33haa? -refresh

posted by mehacton,
High-MMR and professional player w33haa, recently found scrimming with the likes of H4nni and Fly, has gotten himself into hot water recently over allegations of cheating in European in-house league European Elite League (EEL). We've helpfully compiled all of the information that's flooded out concerning this scandal-in-the-making.

Omar 'w33haa' Aliwi is a player constantly near the top of the MMR leaderboard, carrying a weighty MMR of 7699 as of this writing and we recently posted about him competing in Fly and H4nn1's mix-team called Mee Pwn'd in the upcoming DotaPit Season 3 qualifiers. His skills and successes earned him an invite to the European Elite League (EEL), an inhouse league for the best European players. Games in this league are hosted in a private lobby, normally by a spectator, but in this instance w33haa hosted the lobby himself, and enabled cheats - without telling the other players in the game.

Playing his fearsome Meepo, w33haa proceeded to use the -refresh command, allowing himself to jungle much more quickly and efficiently, and so obtaining a considerable advantage in the early game. Wanting to see how w33haa obtained such stellar farm so early in the game,

Latyos12, another player in the game, reviewed the replay and recorded several instances of w33haa's blatant use of the -refresh command, and published it on Reddit shortly thereafter. 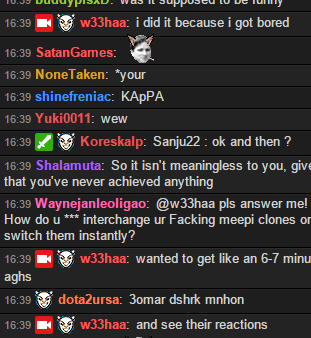 Reactions Around the Scene

EEL refused to buy this "for the lulz"-type argument, promptly unvouching w33haa and refunding affected players their rating points (an unvouch is akin to a removal from the league). Latyos in particular was not happy, noting that w33haa's status as a professional player rendered him more or less immune from initial suspicions of cheating when performing well above average.

Kai "H4nn1" Hanbueckers, requested a moderation of passions in his Twitch stream, admitting that w33haa's actions "might have been unprofessional" due to EEL's monetary reward, but at the same time observing that the game was one of a small percentage of games that might make a difference in the EEL standings and, therefore, the award of prize money.

Loda's response to the incident

Interestingly, H4nn1 may not have been entirely correct about the game not mattering, however, as the present EEL leaderboards show

Exist, one of the opposing players in the game w33haa cheated in, barely in second place above

Ritsu. Had this gone undetected, Exist stood to lose 75 euros - one-third of the second-place prize pool - if he lost second place in the rankings as a result of w33haa's cheating.

W33haa did tweet out an apology saying: "If anyone from that game is offended by what I did, I'd like to say I'm sorry, as for the people who were not affected in any way. Wake up, do something productive instead of bashing someone that did something which in no way influences your lives and stop being warriors."

w33haa did use the -refresh command in a league game without informing either his own team or the enemy team that cheats were enabled.w33haa's unauthorized and unmentioned use of the -refresh command granted him a considerable advantage in the early game when Meepo is strongest.If EEL's standings are up-to-date, one of the players on the opposing team could have lost both money and league standing as a result of the cheating.EEL has reacted swiftly, removing w33haa from the league and refunding affected players their rating points.w33haa's defense is essentially that the game was of no consequence anyway.w33haa did tweet out an apology to the players involved in the game in question, but did not admit enabling the cheat was a mistake.

A harmless act of fun or a serious assault on the integrity of a league? What do you think? Tell us below!

Matt Chesser, a joinDOTA Senior Writer. Matt should really get around to putting up an image of himself in the box there. He would like to commend Latyos' detective work and courage in revealing this example of a well-known player cheating, and thank his friends JJ and Neil for putting up with him for so long.Florida, United States