posted by Malystryx.GDS,
The votes have been counted and the winners have been crowned in the joinDOTA Awards 2014. We received tens of thousands of votes in our 12 categories which included; Best Sportsman, Best Tournament Series and Community Figure of the Year. Did you vote for the winners? Find out all the results inside, as well as some special joinDOTA tributes. 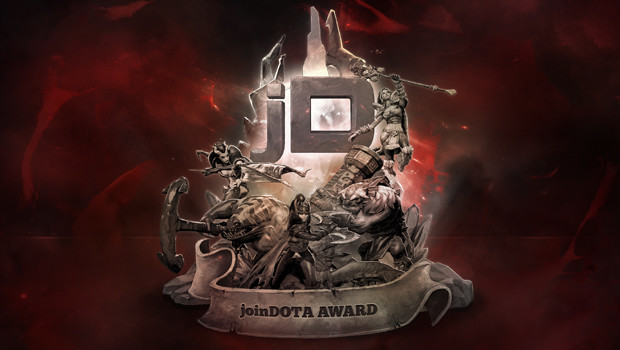 Congratulations and thank you! We'd like to thank all of the joinDOTA users who took part in our awards, as well as congratulate all the winners. There were quite a few surprises, particularly in the Best Sidelane Carry Award, so be sure to give your thoughts on the end results in the comments.

Johan "BigDaddy" SundsteinThe award was to pay honour to the players who have gone beyond the call of duty to contribute to the community, and BigDaddy has done just that. The Dane remained in the public eye despite a rocky patch with Fnatic earlier in the year, providing "so smart" commentary at the Summit, engaging with fans on LAN and avoiding any kind of public feud with other teams or players.BigDaddy's attitude towards his fans and his peers kept him a crowd pleaser throughout the entire year, humble yet skilled, the Team Secret player fully deserves his crown as the Best Sportsman of the Year.

Ludwig "zai" WåhlbergDespite a few raised eyebrows over Zai falling into the newcomer category, 2014 was definitely the year Zai made a name for himself, coming out from behind the shadow of the Arteezy hype train. Zai has a winrate of 71.6% in competitive gaming, the third highest winrate of all players with more than 50 games under their belt. Zai also helped define new meta, mastering unused heroes such as Wraith King - a hero which Zai has a 17-1 record on, making him extremely versatile and a ruthless support able to switch to become his team's fourth core. Zai metamorphosed this year, to become one of the best support players in the world and certainly the strongest newcomer to the limelight.

Team Evil GeniusesNo major surprise to see Team Evil Geniuses come out ahead of the four other nominees in the Team of the Year category. EG were by far the most consistent team of 2014, showing bottle when it came to major tournaments, and finished first at The Summit, World E-sport Championships, Starladder X and DreamLeague Season2. They were also the highest placed Western team at The International taking 3rd place, not to mention silver medal at ESL One Frankfurt and New York. It is difficult to find a weak link in the roster, given that PPD - arguably their "weakest" player on the field, is critical in their victories due to his incredible drafting prowess and leadership. Team EG were lethal in 2014, and as such received more than half of the votes cast.

Toby "TobiWan" DawsonAfter a relatively quiet 2013, TobiWan was blessed with the opportunity to cast the larger scale events of this year, deafening the Commerzbank-Arena crowd at ESL One Frankfurt and leading the charge at The International 4, where he cast alongside the runner-up in this category, Troels "syndereN" Nielsen. With an influx of analysts in the casting panels this year, TobiWan remained one of the few hype men left standing, and definitely found his groove again after getting stuck into the ESL One. Although the popularity of his karaoke streams is questionable, there is no doubt that TobiWan does pour his life and soul into every one of his casts.

Bruno "Statsman" CarlucciBruno "Statsman" Carlucci can do no wrong in the world of Dota 2, from his magic tricks at The International 4, to his ressurection of DreamLeague Season 2, the Argentinian is almost untouchable. A pivotal part of the operations of the GD Studio, as well as the brains behind the recent Twitch Double Trouble event, Bruno is driven by the desire to break new ground, an almost unsatiable hunger to keep raising the bar to create content for the community. He is also very open to criticism and feedback, making him one of the most approachable "personalities" in the scene. He dispenses with PR bullshit, and this honesty is appreciated by viewers, helping him towards 19.1% of the votes in an extremely competitive category.

Kuro "KuroKy" Takhasomi Although a support player in NaVi, Kuroky is no stranger to the carry role, and he resumed his carry duties when he joined the all-star Team Secret. From his taunt at ESL One New York, to his insights in the "so smart" commentary that made a return in the Summit 2, Kuroky is a very down to earth player and generally lets his play do the talking. He also has a ridiculously impressive hero pool in 6.82, playing 26 different heroes in 74 matches. He finished ahead of retired BurNing and Vici Gaming's maestro Black^ in the final results to earn the title of Best Sidelane Carry of the Year.


BigDaddy and PuppeyOne of the most recent partnerships to be struck, the combination of Puppey and BigDaddy has been phenomenal, helping Team Secret to quickly rise the team rankings. Despite having yet to win a title, the duo helped Team Secret to place 2nd at StarLadder X and 3rd at The Summit 2. Both BigDaddy and Puppey excel at high skill cap heroes, and roam with malicious intent in every game, relieving the pressure off their cores and disrupting the flow of the enemies gameplan. Beautifully in-sync, the duo even finished first ahead of the Vici duo FY and Fenrir and EG's Zai and PPD, a credit to how far they've come together in such a short space of time.


Gustav '"s4" MagnussonS4 completes the Team Secret quartet to be commended for their performances this year. After a rough start to 2014, S4 made the surprise move to leave Alliance where he had made a name for himself with the "million dollar dream coil", to start afresh with a new team. S4's strength does not lie in his hero pool, as the Swede has quite a limited pool of heroes he plays, but instead lies in how ridiclously well he plays the handful of heroes he is most fond of. He brushed aside the likes of Dendi, Arteezy and Ferrari to win the Solo Championship at TI4 in the summer, and delivers a masterclass whenever he plays Puck or BrewMaster. A formidable force in mid-lane, S4 was voted Mid Player of the Year ahead of world-renowned Arteezy and Dendi.

Saahil "UNiVeRsE" AroraUniverse is in a world of his own, and ironically said he hates Dark Seer, despite playing the hero more than any other professional player. He is also renowned for his Tide Hunter, which at the moment he has over an 80% win average with over all the patches. The offlane can be a lonely and sorrowful place, especially when pitted against a ferocious tri-lane, but Universe can hold his own, buying his team time, and rarely makes any fatal errors. Aside from a cameo as Aladdin in a bid to allow Cloud9 and Aui_2000 to travel to the Summit 2, he is one of the more reserved players on Team EG, but when it comes down to business, he has delivered time and time again.

Era and his trip to TI4One of the major talking points of the year was Era and his journey to TI4. Stricken with travel phobia, the Swede's trip to the illustrious event was in the balance, and if he did not travel then his team would lose their spot according to Valve. The drama was made even more impressive as it caused Valve to make a public statement which provided all the email correspondence between Era, Fnatic and Valve. In a state of panic Era made the mistake to try to contact Valve himself which ended up throwing a spanner in the works, a decision he later regretted publically. After all the fuss, Era did eventually manage to attend the event thanks to alternative travel arrangements being made. Unfortunately the team broke up after the event, making all this drama even more ironic.

The SummitThe second installment of the The Summit was the last major tournament of 2014, and was greeted with a fanfare of approval from viewers for how it allowed them to see their favourite players interact in a social setting. With ridiculous stretch goals such as grill cam, tag team dota and an enchantress cosplay by Godz, BeyondTheSummit's tournament found a way into the hearts and minds of our community, as did the lovable courier Duskie. The International 4 and ESL One were the runners-up in this category, just proving that first and foremost people want to get to know the players behind the nicknames, and that the scale of the location isn't everything.

Alan "Nahaz" BesterNahaz's contribution to the community this year has been extraordinary. From providing stats for all the major studios both in-game and via social media, to pulling off some of the most brilliant co-casting Capitalist has ever had the honour to witness. Nahaz was also the one who raised the alarms on the 6.82 bounty changes, and was willing to put himself in the firing line. Furthermore, Nahaz has mentored many of the up and coming statsmen and makes himself available to help anyone looking to get into the scene. ALL in his spare time, true legend.

DireDudeIf you have somehow managed to miss #CASUALDOTA then shame on you! Diredude is the man behind the extremely popular sketch series. His drawings - which are a mix of regular cartoon with a splash of manga-ish doodles are incredibly unique, managing to transform our favourite heroes into adorable teenagers while still maintaining their core "essence". If you have not yet seen his work then make sure to check out his tumblr.

Kelly "Kellymilkies" Ong Xiao WeiKellyMilkies is Alliance's team manager, but her approach to management is very different to her peers, often organising give-aways, fan signings and forever interacting with the team's fans on social media. KellyMilkies has been our fly on the wall especially at Chinese events, allowing fans to see what goes on behind the scenes and expose the social gatherings between teams. Although her reputation "On the mic" might have been questioned recently, there is no doubt that she has been fully committed to bringing fans closer to the teams and the players.

HotBidKen "Hot Bid" Chen is a prolific interviewer, and although he stepped back a bit this year, he was responsible for bringing so many memorable interviews at TI4 and ESL One New York. HoTBid's approach to interviewing seems inspired by awkwardness but behind this facade is a remarkable individual capable of getting players to open up about their personal lives, deepest thoughts and aspirations, as well as see how they respond to a troll-infested situation. HotBid brought a lot of joy to a lot of viewers this year.

Lawrence Phillips, joinDOTA's Editor-in-Chief.Malystryx has been in eSports since 2004 working as eSports Editor for Razer and was Editor-in-Chief of SK Gaming in the glory days. He misses the days of Warcraft3 but makes do with the world of DOTA 2. He also spent countless hours producing the photoshop "magic" you witness before you. Location: Bristol, UKFollow him on @MalystryxGDS.