Team Secret 3-2 in today’s Starladder X grand final, claiming the $105,000 dollar first place prize. The series itself came down to the wire in the final game, with Roshan proving pivotal throughout the series.

The finalists take the stage

EG came into the series one game down, and after a shaky start the match was looking promising for Team Secret; however it wasn’t long before EG found their feet, claiming a thirteen minute Roshan and picking off

Kuro "KuroKy" Salehi Takhasomi’s Storm twice in five minutes. From there it was EG who took control, with

Artour "Arteezy" Babaev perched atop the net worth they proceeded to out farm Team Secret and claim three consecutive Roshans by minute 35.

The game then turned into to a base race, with EG managing to get a lane of rax. However Team Secret managed to kill Arteezy in the process and used the subsequent momentum to assault EG’s top barracks, but EG’s team fight proved too strong for Secret as the double ravage decimated their cores, leading to another lane of rax for EG. In the end Secret where forced to concede the game, tying the series at 1-1.

Team Secret opted for a well rounded team fight line up in the second game, taking an early lead by utilizing rotations from Brewmaster and Enigma. In an attempt to hit back EG ganked

Tal "Simbaaa" Aizik on the bottom lane; however he promptly bought back and proceeded to get a double kill, soaring to the top of the net worth chart.

The next engagement came at the Roshan pit, with Secret once again utilizing their impressive team fight spells to defeat EG. Team Secret then used the aegis to group up and claim all of EG’s outer towers in the next 10 minutes, after which they claimed their second consecutive Roshan and set their sights on EG’s base. Despite impressive defensive plays from

Saahil "UNiVeRsE" Arora, Secret eventually broke the EG base at the 33 minute mark. Proceeding to wipe EG in their own base before claiming their second lane of rax, finally forcing the GG call out of the Americans and claiming a 2-1 advantage in the series. 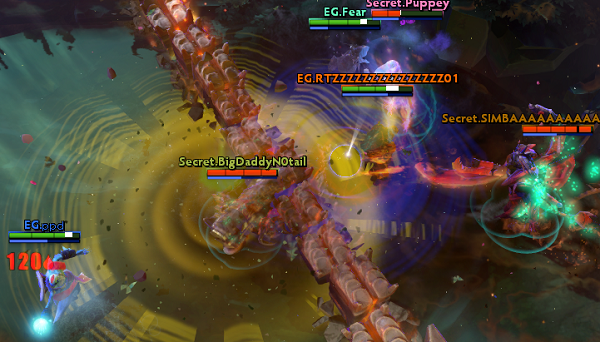 Team Secret's teamfight was impressive to say the least

The third game of the series unfolded in much the same manner as the first two, as EG sought to utilize the dire side to take multiple Roshans and command map control. With the first aegis going to Arteezy’s Lycan at the 13 minute mark their strategy was well underway, as a subsequent triple kill saw Arteezy command a 5k net worth lead. EG then proceeded to take the remainder of Team Secret's outer towers and threaten their base.

Secret where initially able to hold the American squad out, utilizing fissure to stall the push; however EG ultimately broke the base with the third aegis at minute 37, prompting a team fight that sealed Secrets fate, with EG taking a further two lanes of rax and once again tying up the series at 2-2.

The wolf finds its prey

The final game of the series was a thrilling hour long clash, with Arteezy’s Lycan once again proving formidable. EG took an early lead, claiming an early Roshan and taking a majority of Secret’s exterior towers. However Team Secret managed to turn the tides at the 33 minute mark, winning a fight at the Rosh pit and breaking EG’s hold on the aegis in what Merlini described as a “crucial turning point”.

From there even more team fights ensued, with EG fighting through the aegis to win yet another fight; however some impressive co-ordination from

Clement "Puppey" Ivanov saved Medusa’s life, stifling any hope at an EG push. Both teams continued to trade farm and kills for the next 10 minutes with no clear winner in sight, but that all came to an end at the 55 minute mark, as Team Secret suffered a double die back on their cores, signalling the end of their Starladder X journey.