posted by Jooehn,
Both of these western giants impressed during yesterday's quarter-finals and both certainly showed off during this semi-final. Even though they lost the close first game,

Cloud9 proceeded to take a very one-sided game off

Evil Geniuses, but had to see themselves defeated in the end by nothing less than an Omniknight.

Pregame thoughts: It will without a doubt be a tough task for both teams to win this match-up, but the odds speak in

Evil Geniuses favor. The last time these two teams went head-to-head during a LAN, in the WEC Final, EG ran away with the series as they won four maps to one in best of five grand final. We will have to wait and see if either the heavy pushing and split-pushing from EG or the aggressive teamfight focused playstyle of

The draft is underway. C9 immediately get their hands on the mighty Brewmaster for FATA along with the Skywrath Mage. They will stick with their aggressive playstyle and look to get more control further in the draft. Evil Geniuses on the other hand has secured the Visage, while banning the Drow Ranger, who usually is the go to combo with this heavy damage dealing support. With the addition of the farm dependent Spectre to C9's draft, they are in desperate need of very strong teamfight, as they will have to fight without EternalEnvy during the early- to midgame. Evil Geniuses sticks to their splitpushing style as Lycan serves as their last pick-up. Evil Geniuses will try to break highground and push early with their 1st position Visage and their strong early game teamfight and control.1.00

The hardhitting Treant Protector draws first blood against the squishy Skywrath Mage in the botlane, with the help of Visage. EG have to pay for the aggression with a death on Fear, giving C9 a return kill.

On the table, EG gets the better out of the early trades with the first blood and 3 for 2 kills. However, both Visage and Lycan have died and Fear isn't getting the amount of farm he should as he's about 15 creeps behind EE's Spectre.8.30

Cloud9 goes really aggressive beneath the tier one tower bot with, bringing down the botlane of C9 with ease. Some great juking from Zai along with the Vodoo Restoration kept him alive through the Brewmaster ultimate and the trade instead goes in EG's way, as they turn around and bring down the first tier one tower of the game. 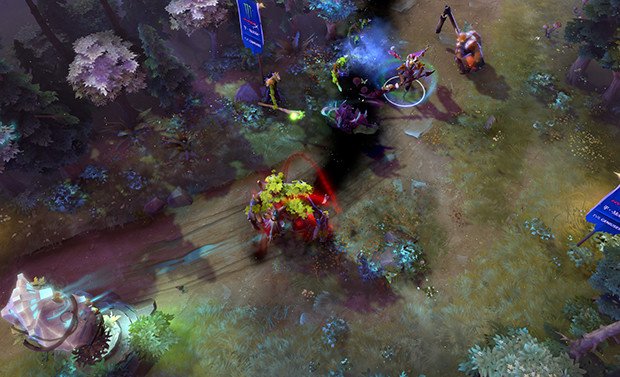 EG tries to utilize their heavy pushing as they pressure the tier one tower mid, however a counter initation keeps them from bringing the structure down. No blood was spilled during this engagement, but C9 get away with a small victory as they get the deny on the tier one.19.00

The game is still wide open as both teams are getting a lot out the map, but EG seems to have the better gameplan. After getting a pick-off on the lone Dazzle after using Lasso, they managed to bring the Spectre down after a well executed gank, where they combinated the Familiar stuns with the Death Ward.23.00

EG easily brought down an uncontested Roshan with their immense damage. The deal seemed to be sealed after what looked to be an amazing and game defining kill in the toplane on Spectre. However, some amazing Legion Commander plays from b0ne7 turned the tables and evened out the kill score. The outcome of this game is now again impossible to predict. But the bonus damage on b0ne7 is getting higher and higher... 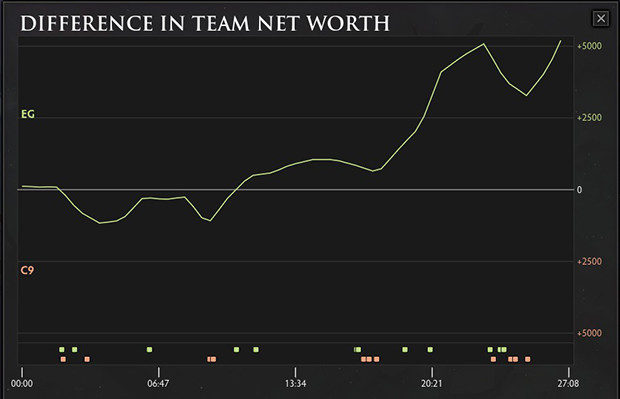 Zai once again show the deadly potential of a well-timed Witch Doctor ultimate, as he manages to channel it's full duration in a fight at the botlane tier two tower. He quickly brought the members of Cloud9 down low, allowing Arteezy to wreak havoc with his Shapeshift form and clean up the mess. EG proceeds to take down another uncontested Roshan.35.00

Cloud9 manages to bring out their A-game during an engagement beneath the toplane tier two tower. Legion Commander's ultimate quickly deal with Zai and both teams cores simply ignored eachother and the fight split up into two. The Shallow Grave from Dazzle managed to keep him and his fellow support alive, despite the hurting rightclicks from Lycan. In the meantime Legion Commander and Spectre killed of the EG support and proceeded to deal with Lycan. 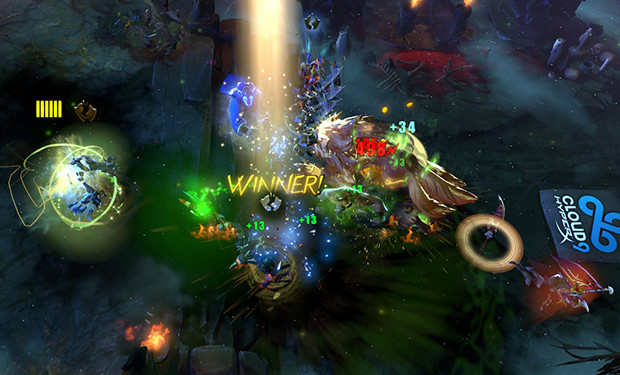 Even though C9 looked to be taking this game back with their lategame potential and effective control in the teamfights, EG's momentum was just too big. They regrouped to exploit the long cooldowns of C9 and went at it again in the toplane, bringing down the last Barracks standing there. Their next move was to push up the botlane and put pressure on the next set of barracks and with a Black King Bar up and running on Zai, the events took another turn. Another full devastating channel of his ultimate brought chaos upon Cloud9 and even though they popped one buyback after another, they had no means to stop the resilient EG line-up. GG was called and we now move on to the next game!

Cloud9 trust in the Brewmaster once more and also manages to get their hands on the Visage this time around, most likely to be controlled by Aui_2000. Evil Geniuses also put faith in their past picks as we will get to see another game with Universe on the Batrider and ppd on the Treant Protector. Cloud9 are looking to once more focus on heavy teamfighting with the "wombo-combo" duo of Sand King and Dark Seer. They finish up their line-up with Slark to add damage and gank potential. Evil Geniuses brings out the Phantom Assassin that Arteezy has been so successful in the past. The cherry on the top of their strong brawling bunch is a first position Wraith King for Fear.2.30

The lanes are shaping up nicely for Cloud9 who seems to get the better out of the farming so far. Laning a melee hero the relies heavily on rightclicking against Brewmaster is very tough, which clearly shows when it comes to the last hits table. Aggressive rotations have yet to be made.5.20

Once again EG and ppd's Treant Protector kicks off the killing, as b0ne7's Dark Seer gets caught off by the Jakiro Ice Path in the toplane and falls to the heavy autoattacks of the mighty Tree.

A rotation from Slark and Brewmaster to the toplane pays off with two easy kills on Wraith King and Treant and some more gold in C9's pocket. There are now Blink Daggers up on Slark, Sand King and Brewmaster, giving them huge amounts ganking potential.14.10

There's nothing EG can do about the great aggression from C9 and their initiations and EE-Sama and co are in full control of the Dire side jungle. One after one of EG gets caught out, while trying to farm up means to deal with their opponents. The Phantom Assassin pick has not worked out for Evil Geniuses as she quickly fell behind in the midlane and she doesn't really have a good comeback mechanic. 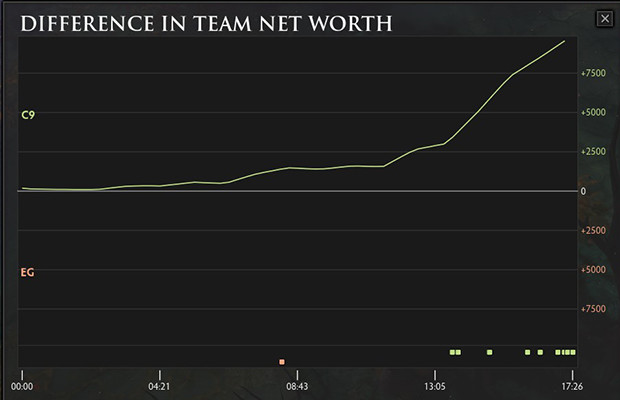 This sure was a quick one ladies and gentlemen. Cloud9 completely outdrafts and outlanes their opponents and could snowball their way to victory equipped with their efficient Blink Daggers. One last fight between the botlane tier one and two towers that ended in a teamwipe, was all it took for EG to realise that they had no chance of coming back. A better gameplan, more aggression and control gave C9 a clean win, evening up the score to 1-1 in this semi-final.

We will get to see another Brewmaster in the last game of this series, but not on FATA this time. It was EG's time to get their hands on the strong fighter and he will probably be controlled by Fear. They also pick up their favoured Nature's Prophet, that might be a fourth position, handled by zai in the jungle. As they round up their draft with Shadow Fiend, Skywrath Mage and Omniknight (!), it's obvious that the Nature's Prophet will be brought to the offlane. Cloud9 have also got their hands on heroes in their comfort zone, as EE will handle Naga Siren, Fata will play his Puck and Aui_2000 gets his Visage. It will be interesting to see how this match progresses, as both teams look to have a solid plan in mind.3.20

First blood seemed to be spilled in the midlane as Omniknight, Skywrath Mage and finally Nature's Prophet rotated to kill off FATA. However a well-timed Phase-Shift and the arrival of his Bottle saved him and the fight turned into a 4vs4 as Cloud9 rotated in. First blood went to EG and zai in the end.5.00

The early rotations are coming from EG this time around and the Skywrath Mage is working out very well for them. zai has by 5 minutes killed 3 heroes and participated in another one, as he ganked Puck in the midlane, allowing Arteezy to secure a precious kill.

The aggression from EG sees no end whatsoever as they've been bullying and denying b0ne7 in the jungle to a great extent. Lacking levels and gold, Cloud9 are forced to give up towers and stall as much as possible, while waiting for Naga Sirens Radiance.14.50

Cloud9 tried to create some space for themselves and brought the fight to the Radiant jungle instead. Even EE makes his way to the woods to try and aid his team, which proves to be a severe mistake as he dies before purchasing his Sacred Relic. 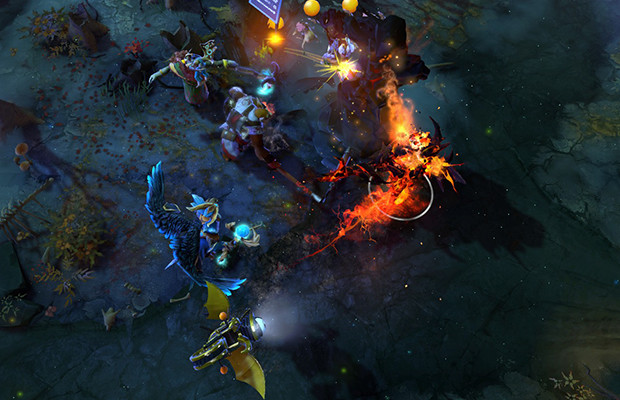 Despite having a finished Radiance on Naga Siren, C9 loses yet enother engagement and manage to forfeit their tier two tower top. Cloud9 are in a dire situation as they only have one tower standing outside of their base while they've only managed to bring down one of EG's. 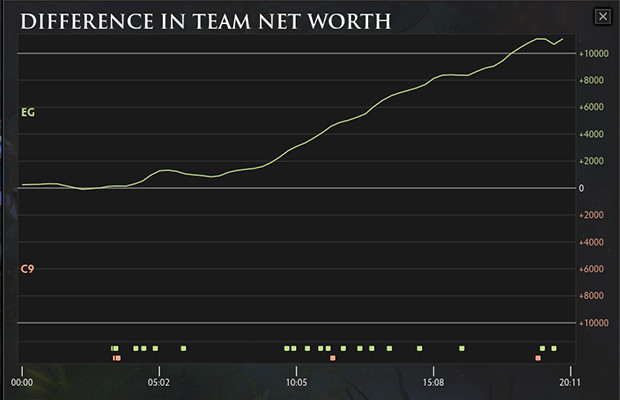 C9 are losing their ground against the heavy aggression and insane amounts of damage from Evil Geniuses and as two heroes gets picked off they have to forfeit their set of barracks in the botlane. EG showed no signs of hesitation and moved on to the midlane. With the aid of Song of the Siren, C9 manages to chase them off, defending their midlane barracks.27.06

The only thing left for EG to do was to regroup and start the siege of the midlane barracks. Cloud9 managed to hold them off for a few minutes, but nonetheless, they soon fell before the rightclick from Arteezy's Shadow Fiend and Universe's Nature's Prophet. EG had this game under complete control from start to beginning and with an amazing draft coming out from ppd, they executed their game perfectly, only losing a single tower. zai did extremely well on his Skywrath Mage and ended up with the impressive 11/3/9. He and the rest of the squad now move on to battle Vici Gaming in the grand finals.

John Wimarsson, joinDOTA's Senior Writer.Jooehn is a gaming enthusiast who only recently fell head over heels for Dota 2 after watching TI3. If he's not playing his guitar, writing for jD or lying on his couch dreaming about space, he's probably in solo queue trying to reach the 5K MMR dream.Location: Lund, SwedenFollow him on @Jooehn.