Why the 6.82 Kill Bounty changes are bad

posted by Nahaz,
Yesterday during C9 vs FNATIC, Bulba commented during the game that in 6.82, the kill bounty for EternalEnvy's Lycan (who had zero kills at the time) would be about 1k. The truth is much worse according to Alan "Nahaz" Bester who worries these changes will lead to utter stagnation in the pro metagame. ---

EDIT: The numbers in the article below are slightly off. They assume that the new AoE kill bounty bonuses in 6.82 apply instead of the old bounties. In fact, they apply in addition to the old bounties. I am not going to try to correct these numbers now, in part because I've verified that the kill bounty messages in game do NOT properly reflect the actual amount of gold awarded to kills once the new AoE bounty is included. I also suspect that the team Net Worth graph is not properly updating to reflect the bounties, but have not verified this yet in the client. Because of this, I feel that any attempt to correct the numbers would simply lead to additional confusion. The article is still valid if you read it as applying only to the additional bonus gold granted in 6.82 rather than the total bounties. I *have* edited the response to the first question (about Lycan killing Nature's Prophet).


Let's look at a concrete example of the new 6.82 kill bounty changes. The screenshot below was taken at exactly 16:00 on the game clock. EternalEnvy's Lycan is fighting against Buugi's Tidehunter, with Aui_2000's Dazzle (who had just cast Shallow Grave on EE) and Trixi's Nature's Prophet nearby. 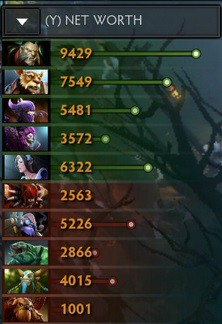 Let's just suppose that Buugi and Aui_2000 are both forced away from the fight and manage to escape safely and somehow Trixi's Nature's Prophet manages to solo kill Eternal Envy's Lycan. That single kill, if it were to happen under the same game conditions in 6.82, would have a dramatic impact that could change the course of the entire game. This is due to one of the 6.82 changes that might have passed you by undetected.

The figure below shows the new formula for gold bounties for hero kills (as well as the old for comparison), the money a player receives for killing another player on the opposing team. The biggest change is that hero bounties now depend upon the discrepancy in total Net Worth across the two teams, labeled 'NWDifference' in the formula. In other words it not only takes into account the level of the victim but also the net worth of his entire team.