NewB are The International 2014 Champions

posted by Meliora.Infinitum,
The Chinese juggernauts

NewBee are your International 2014 grand champions taking home over 5 million dollars of prize money as well as the most esteemed title of them all.

Vici Gaming was unable to continue their superb run in the Grand Finals as they fell to their fellow countrymen 3 to 1, in four quick games. 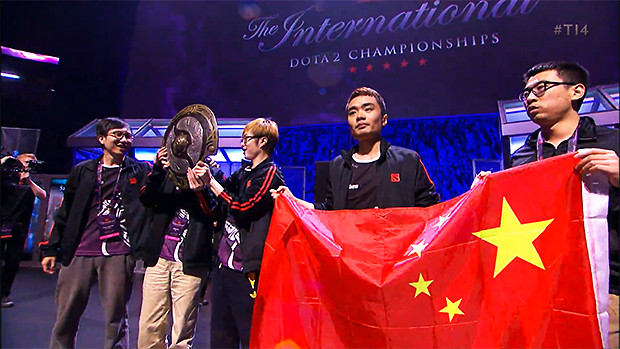 NewBee once again opt for the Nature’s Prophet which they’ve had a clean run in the tournament so far, as well as another global hero AA. VG on the other hand grabs their support duo early once again going for the Shadow Shaman/Earthshaker combination. VG keeps counting on the control taking the Brewmaster as their third selection and a Clockwerk as fourth, once again counting on the mid-game punch of their lineup. Both teams have lineups which can and most likely will clash very early on.2:00

VG gets the Fissure trap on the Lion and gets a valuable first blood, but NewBee responds only moments later with a kill of their own. 5:00

Another two kills goes the way of VG who’s completely taking over the game in both mid and bottom lane. The brilliant rotations and a meticulous Brewmaster play are driving VG ahead early on. 6:00

VG rotates to the mid lane and snatches another two kills for none as they dive the mid tier 1 tower without much trouble. 8:00

Mu dies again on the mid lane and the only thing going the way of NewBee’s is the fact that Hao is doing well on the top lane. 14:00

NewBee is splitting the map nicely, avoiding a lot of the aggression that VG wants to put on them, while putting some pressure on the towers elsewhere. A nice smoke gank towards the top lane gets them a kill on the Lifestealer and a tier one tower to boot. 16:00

Mu dies for the fifth time on the middle lane as VG takes another tower, trading their own tier one top for it. A bad TP from Hao moments later, nets VG four extra kills and another tower. They are starting to get too far ahead for NewBee to handle.

With their lead, Vg is pushing ahead down the bottom lane as NewBee looks to trade on top. VG manages to defend their own tower while taking down NewBee’s.22:00

VG goes for the high ground after taking down the tier two tower on the top lane. A massive bloodbath ensues which ultimately results in a huge trade for VG as they get multiple kills, buybacks and a tier three tower in the process.END

VG is going for another push, brute forcing through the NewBee lineup with their farmed heroes, and at the end of the fight snatch another fast victory under their belts, as NewBee calls the GG just 25 minutes into the game. VG now leads the series 1 to nothing. 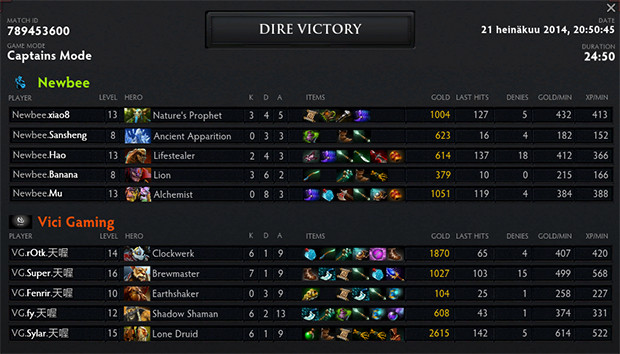 This time around VG snatches the Nature’s Prophet for Sylar, whereas NewBee opt for the same two heroes - Alchemist & AA - that they played in their last game. VG stays true to their strategy of pushing in early, but takes a more Western approach with a Skywrath Mage pick. This time NewBee has managed to build a robust lineup which easily take the late game if they ever get there. On the other hand, VG’s lineup will have its window of opportunity to strike, but can they manage to recreate their fast victory from game one? We’ll find out shortly.3:00

A huge mistake from rotk results in a first blood for NewBee as the ES Fissure finds its mark.6:30

A massive turnaround for NewBee on the bottom lane nets them multiple kills while only losing the Alchemist themselves. 8:00

NewBee bags a kill on Morphling in the middle lane with an on-point Ice Blast from Banana.10:30

A brilliant tower defense from NewBee nets them another two kills on both Viper and Nature’s Prophet. It looks like this game is not going to end anytime soon.14:00

The trades keep going NewBee’s way but VG aren’t backing down easy pushing down the top lane after a nice pickoff on the AA. NewBee responds quickly with another set of TPs and is able to push back the opponent while getting a good sum of kills in the process.17:00

A smoke into counter smoke spells doom for VG who lose multiple heroes in the process. They manage to get few kills of their own after a long drawn-out fight.

It’s a game of bad trades for VG as they lose another four heroes and a Roshan to NewBee. The gold difference is starting to hurt VG.23:00

NewBee is stacking up their core items as VG struggles to find their footing. The support duo tries to make miracles happen for VG, but get destroyed by the counter initiation from NewBee on the top lane.END

It’s not rotk’s game as he gets dunked by Sansheng on the top lane, while the rest of NewBee are fighting on the bottom lane. With their huge item difference NewBee is able to push through the VG lineup yet again and this time they’ve had enough and call another early GG. The game is now tied 1 to 1. 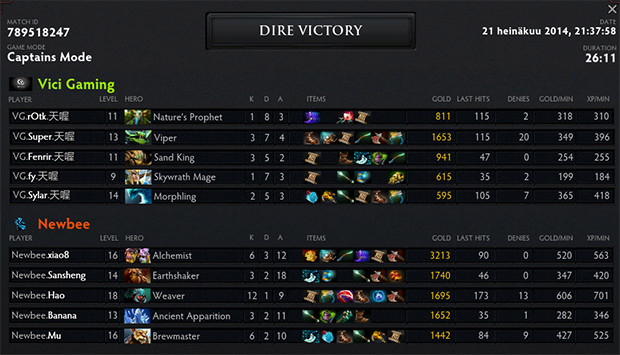 VG is going balls deep with their draft, putting a straight out heavy emphasis on magical damage and early game aggression into snowball. NewBee’s draft is a bit more solid and if they can curb the deathball of VG’s they can easily take the game late.3:00

Sansheng gets a perfect rune for early game and manages to get the first blood on Sylar. Moments later Vg retaliates with a kill on the Weaver at top while Ember falls down to the Puck/Chen combo on the mid lane. Explosive start for both of the teams.3:00

Sansheng gets a perfect rune for early game and manages to get the first blood on Sylar. Moments later Vg retaliates with a kill on the Weaver at top while Ember falls down to the Puck/Chen combo on the mid lane. Explosive start for both of the teams.6:30

Smoke from NewBee nets a kill on AA, but a great rotation from Super gets VG on the board with two kill of their own. NewBee reacts to the reaction of VG’s and we have a bloodbath in our hands.9:00

NewBee strikes again with a well-executed reaction getting two kills for none.12:00

VG tries to mount pressure on top, but end up losing two of their heroes for a tower kill. With NewBee having the three highest farmers on the board, it’s not looking great for VG.14:30

A total outplay from NewBee puts them further ahead in kills and in farm, as they clean up the VG squad near the Radiant ancients. Brilliant plays from Mu on his Puck. END

A last ditch effort draws VG in the Roshan pit where they lose a crucial fight and the Aegis, and have no other choice than to tap out and concede the game. NewBee now holds the advantage 2 to 1. 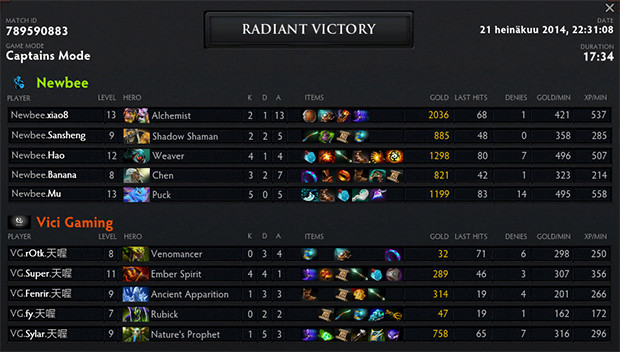 Both teams go for a rather similar style than in the previous games, with NewBee focusing on control and VG going for their “punch-into-push” style of play we’ve seen them do many times before. Both teams will try to get their ganks going early on and the team with the more successful early game will once again be on the driver’s seat.0:30

An early first blood on rotk in the middle lane as NewBee supports make another great rotation.3:30

A big plays on the middle lane put NewBee ahead early on as Hao gets a double kill on his Ember Spirit.5:00

Another great rotation from the NewBee supports nets them a kill on Sylar on the top lane. NewBee is getting ahead fast against a lineup that can’t really contest the enemy in the mid game.11:30

VG mounts a push in the middle lane, but get obliterated despite a beautiful Epicenter from the Sand King. VG’s early game push lineup is running out of gas fast.12:30

VG mounts a push in the middle lane, but get obliterated despite a beautiful Epicenter from the Sand King. VG’s early game push lineup is running out of gas fast.END

VG heroes get obliterated in the mid lane yet again and it’s all over. VG’s game plan never came to fruition properly and NewBee rose to the challenge, and is you Grand Champion of the International 2014. 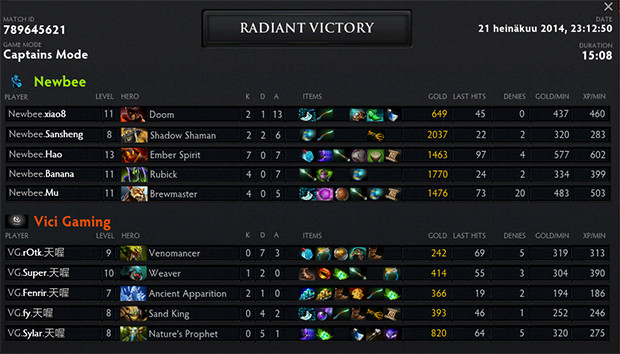 NewBee wins the Grand Prize with 3 to 1 victory over VG.

Check out our coverage of The International 2014 right here.