posted by Meliora.Infinitum,
With group stages done and dusted and playoffs already well under way, we finally have the four remaining teams who made it through the long couple of days of quality Dota at the Summit 2014.

Na'Vi are the final four teams and with only four games left to be played, the stakes couldn’t be any higher.

The end of group stages
Three games were on the menu to round up the remainder of the group stages for the Summit 2014 as the day two begun, and apart from

Na'Vi.US, all teams were still in a fierce contention for the Upper Bracket spots. While the Chinese powerhouses

DK were slightly ahead of the rest with 3-1 records, the last team to drop out of the top four of the group stages was still left to be decided.

Na'Vi.US. The Americans got off to a great start and by utilizing their powerful pushing potential, they were able destroy a tier three tower just 11 and a half minutes in. Little did they know though, that it was the last time they would break the base of

Na'Vi, as the Ukrainian team slowly but surely took over the game, and while the Americans were able to trade quite evenly at first, they were unable to stem the tide as

Na'Vi rolled over their opposition to a clear victory.

The next game between

VG was a thriller of epic proportions. Not only did it feature a Meepo and a “carry” Lich, but this back-and-forth cliffhanger was easily one of the closest games in the Summit so far. While

VG was seemingly ahead in all stages of the game boasting a 15,000 gold lead near the end, score wise, it was dead even from the start. Buybacks became a lifeline for both of the teams and a great decision by

Fnatic - under heavy pressure - paid dividends, as they were able to force a team fight on their own terms at the enemy’s tier 3 tower securing a crucial kill on Sylar’s Weaver, who was still without a buyback from the last engagement. After their main physical damage source was gone,

Fnatic mopped up the remainder of the Chinese team who were forced to call the GG and forfeit the game despite being miles ahead in both gold and experience.

The last game to round up the group stages was well worth the wait as we saw the resurgence of both Naga Siren & Queen of Pain, rounded up by a rather unconventional farming Silencer on BurNIng. While

EG got off to a good start with mason’s Mirana paving the way for a strong midgame,

DK were farming more effectively around the map and with 4 out of the 5 heroes of the Chinese team boasting a carry level farm at 40 minutes into the game, it was too much off a mountain to climb for the Americans. They were able to valiantly defend for a while, but soon the shear pressure brought on by the entire

DK squad was too much for

EG to handle and they were forced to tap out.

With the group stages over and the top four to be seeded into the Upper Bracket, teams turned their focus on the Bo3 playoffs in a double elimination bracket.

DK in the last game proved to be devastating, since it meant that the team would now be seeded in the lower part of the bracket with

Na'Vi.US, one loss away from elimination.

VG, on the other hand, would pair up and battle against one another for the important spots in the semi-finals.

Fnatic were the first two teams to face up in the Upper Bracket quarter-finals. Things did not turn out the way

Fnatic had planned in either of the games, as

DK put the pedal to the metal early on and outright crushed Fnatic, especially in game two. The first game however, was more even of the two, in which despite their small lead early on,

Fnatic weren’t able seize the control of the game, but let it slip right through their fingers, mostly due to superior execution by

Team DK. Luna’s good farm was not able to offset the farm of the Doom, Ursa & Brewmaster combined, which soon became too much handle. The game two on the other hand was a complete disaster for the mixed European team that ended in just 15 minutes.

DK cruised through their opposition with ease in the second shortest match of the Summit so far, painting a terrifying image of their dominance, as they moved on to face the winner of the next quarter-final matchup. 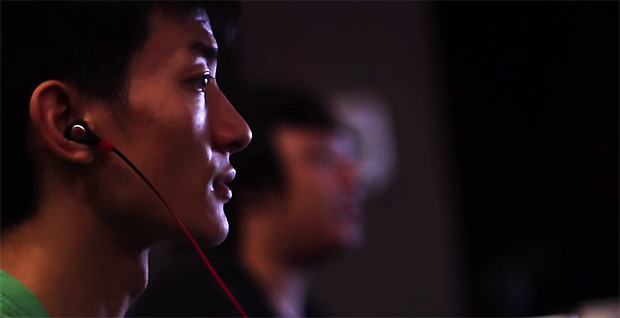 VG. Despite losing the first game rather convincingly, never gaining a gold lead in the entire duration of the match,

Na'Vi were able to bounce back hard in the game two of the series with some world class Tiny/Io play from KuroKy & XBOCT. Like in so many games before, once a team got ahead there was no coming back, and this was the exact fate of

VG as they were forced to throw in the towel and called the GG just 22 minutes into the game, evening out the series. The last game to cap the series was as anticlimactic of a finale as ever, where

Na'Vi got bulldozed by

VG's lineup, only managing to get 3 kills in the entire game that surprisingly enough, lasted for 32 & a half minutes.

Na'Vi with ease and now join

After the Chinese domination in the Upper Bracket it was time for the games in the loser’s bracket. The first match on the list for day three was a battle between two western teams

Fnatic. The mixed European team brought their A-game to start the game one of the series with H4nni’s beastly Night Stalker proving to be a pain in the proverbial butt of

Evil Geniuses. While the gold graph stayed almost even for the duration of the game,

Fnatic seemed to have the upper hand going in to the mid game, despite

EG flaunting a heavy team fight lineup. Only after a fight gone wrong for

Fnatic at 40 minutes in, the Americans were able to push the enemy back and secure a final foothold in the game. From there

EG were able to overpower their opposition and finally, at 49 minutes, force out the GG. Demoralized by their close loss in the game one of the series to the Americans,

Fnatic were unable to find their pace in the game that followed, and despite getting multiple kills on Arteezy’s Morphling, slowing down his farm, they were decimated on all the other lanes. With no way to take on the big team fight of

EG in the mid game, after taking a blow in the laning stage and with kill score already at 24 to 8 24 minutes in,

Fnatic called out a quick GG and became the first team to exit the Summit 2014.

The second Lower Bracket matchup was a rematch between

Na'Vi.US and proved out to be a nail-biting finish to determine the last team to join the final four who remain in the tournament. Despite losing the first game handily in a record time for the Summit (15:23), getting completely destroyed by the Americans,

Na'Vi made a full on comeback in the game two of the series. XBOCT truly wanted to be in the final four when he took the game two by storm with his ridiculous farm on Doom, being 3,000 gold ahead of anyone else just 17 minutes into the game. That and the meticulous control over the enemy team gave

Na'Vi a distinctive advantage over their American rivals and soon enough, they were far ahead of their opposition in both gold and experience. While the game dragged on all the way to 30 minutes, it was all a

Na'Vi showdown from start to finish as they evened out the series 1 to 1. The last game was a 71 minute thriller and perhaps one of the best games in the Summit so far. This also made it the longest game of the tournament, as both teams banged their heads against each other for what seemed like an eternity, until finally the experience of the

Na'Vi squad paid dividends and they were able to overcome the massive damage of a 6-slotted Lycan. In the terms of gold

Na'Vi had the upper hand almost throughout the game, but with a timely push, they lost a barracks 29 minutes into the game. Similarly to the group stage game a day before, this was the last barracks that

Na'Vi.US was able to destroy, as the mixed European team repelled the invaders time and time again, being finally - after a few good team fights - able to break the spirits of their opposition and end the game at the 71 minute mark.

XBOCT Mirana accumulated an impressive 37,000 net worth in the game three.

Na'Vi continues their run in the Summit alongside

EG, who they will face next in the Lower Bracket finals. Before that however, we’ll see which of the Chinese teams can triumph and make their way to the Grand Finals as the Summit 2014 continues at 01:00 CEST. Check out our coverage page more details and info considering the tournament.