posted by Malystryx.GDS,
Alliance faced Team EG for the first time ever in 2014 in the first round of the playoffs in StarSeries IX. The winner would face Team DK in the upper-bracket finals. The second match between these two was both exhilirating and stressful but definitely worth watching, with the supports finally taking the limelight. Game Two is a must-watch. 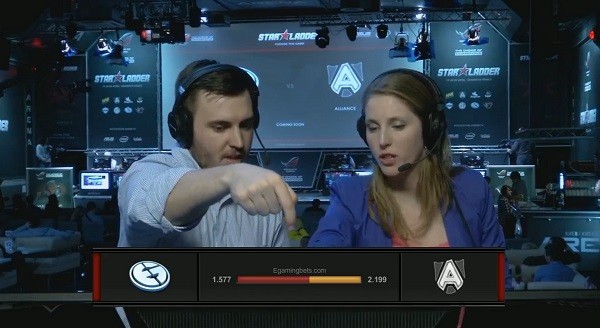 
Game one started extremely badly for Alliance with their Chaos Knight Wisp bottom lane both dying in the first minute of the game to EternalEnvy's arrow followed by Leach Seed and Witch Doctor stun. Loda and EGM died once again versus the safelane only 3 minutes later in the exact same scenario, with the fact their team-matess managed to kill of Arteezy's Shadow Fiend their only consolation. It was the perfect start for Team EG with EternalEnvy having an extremely comfortable time on Mirana as Witch Doctor and Treant decided to go roaming, with 2.3K gold and 34 CS just 7 minutes into the game.

The rotations by EG opened the game up even further, with s4 having to use Song of the Sirens at their top tier 1 defensively to try to avoid Loda dying for the 3rd game in the match, but sacrificed Wisp in doing so. Alliance had commited four players to defend the casual push from EG, leaving Arteezy with all the time in the world. By 11 minutes he had taken down the mid tier1 and was looking at a networth of 6K, and by 13 minutes he was at 8.5k networth with his team leading by 7K gold. It was a very poor start for Alliance, and with Shadow Fiend picking up a BKB at the 14 minute mark, it made it very hard for the Swedes to coordinate any kind of quick gank on him.

They did attempt a sneaky gank with AdmiralBulldog blinking in from the fog right next to Arteezy but the Canadians reactions were instant and he activated his BKB before AdmiralBullDog could pull off his stun. Team EG then turned on Alliance, with EG supports of Treant and Witch Doctor helping to soak up the damage by healing their teammates. THe rest of the match like the beginning was very one-sided with Arteezy simply getting too much space and too much farm, while EternalEnvy's early Maelstrom on Mirana proved very effective. Alliance did managed to take out Mirana once but had to commit four people to do so, with their next target Arteezy eluding them long enough for EG's Puck and Witch Doctor to come to the rescue, Alliance were clutching at straws to get back into the match. Alliance lost two, making the engagement a 1-2 trade for them and EG then went in for the kill demolishing the mid tower and rax before rotating to bottom tier 3 where Alliance made their last stand. Arteezy by this point was untouchable with EG wiping out four of their opponents and Arteezy getting the triple kill. Commentator LD finished the match with the words: "TOO EASY, not just for him, but for the whole godamn team."

VOD of Game 1
Watch live video from dotastarladder_en on TwitchTV

After a short 5-min break for both teams the games continued. At the end of game1 Loda was clearly frustrated, releasing his annoyance on EGM. The commentators of Merlini and LD were dubious as to whether Alliance could bounce back, but a good draft helped put them on the right way. EG team-mates Fear and PPD called it one of his "release games", and we can see why as the Canadian played an almost psychotic game with multiple deaths and buybacks galore.

Alliance opened with a Bat Rider following by a surprising Disruptor pick as their opening heroes, with EG responding with Ember followed by Dark Seer, a combo they run before to great effect. The remaining surprises in the draft was Alliance's choice of Silencer, a hero very popular with Team Empire, but a hero they have only run twice in 6.80.

The bottom lane started well with a wonderful glimpse by Akke's Disruptor into Loda's Mirana arrow helped to kill of Universe's solo Dark Seer. It was just a split second too late to claim first blood, but a confident start compared to how their bottom lane went in the previous game. The mid was even between Arteezy's Ember Spirit and S4's Storm Spirit. It was a quiet early game, with only 5 kills at 10 minutes into the game with Bat Rider's Blink Dagger helped to kill off Loda's Mirana.

At 11 minutes in Alliance smoked up but a poor glimpse by Akke caused AdmiralBulldog's Lasoo on Arteezy's Ember to get cancelled. Alliance lost the supports in the fight but ultimately killing the Canadian, who decided to buy back. A couple of minutes later Alliance fired a scouting arrow into the ancients, with commentators LD and Merlini believing it was not luck but Alliance using their knowledge of how EternalEnvy likes to play. They couldn't however finish off the stack easily despite four Alliance players present and Team EG came into contest the stack killing off Akke followed by Storm Spirit. Team EG went for S4 once again soon after but his team-mates were willing to let him die again so quickly and EGM used global silence to keep their mastermind alive. 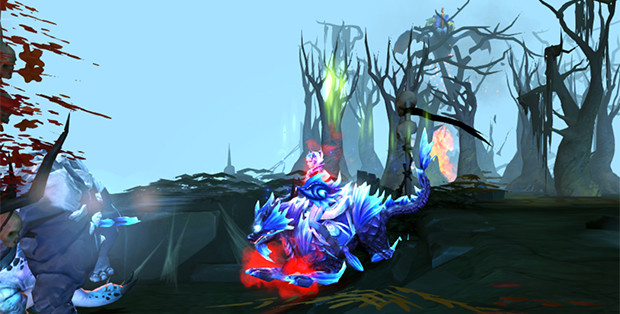 At 21 minutes EG went for their first Roshan of the game, with Luna taking the Aegis, their team leading by 10k experience, with Luna's networth almost 11k at this point. A triple remnant into dark seer vacuum at bottom tier2 of Alliance tore the Swedes apart and EG chased into the tier 3, picking off Akke. However, Arteezy was too bold getting himself killed and bought back for the second time in the game. Two other Team EG heroes died for his over-commitment and his buy back was wasted as S4's Storm Spirit and Bat Rider took him out again just a minute later in the mid lane.

At this point EternalEnvy was coming into his own, with Arteezy's at times reckless nature putting his Ember Spirit behind. Luna's networth 27 mins in was 15K compared to Ember's 5k. At 28 minutes Team EG's warding and 5-man roam stopped two attempts in a row by Alliance to go into their jungle and pick off some of their team. At 30 mins another ward middle gave EG a warning of Alliance's Moonlight Shadow middle lane. Arteezy once again was too keen to follow and engage, using remnant followed by sleight of fist to charge after Alliance but his team-mates were too far behind. His actions were the catalyst for two of his team-mates deaths.

At 36 mins Team EG went for the highground at Alliance, but this was a fight ALliance were perfectly prepared for. Loda's Mirana's damage was now significant, with mjollnir, mkb and a bkb, melting through Arteezy's Ember Spirit who fell and bought back for the third time in the game. This was the beginning of a turn in the tides. Alliance's Silencer got himself a Refresher Orb, essentially nullifying the BKBs bought by EG to cancel his global silence. 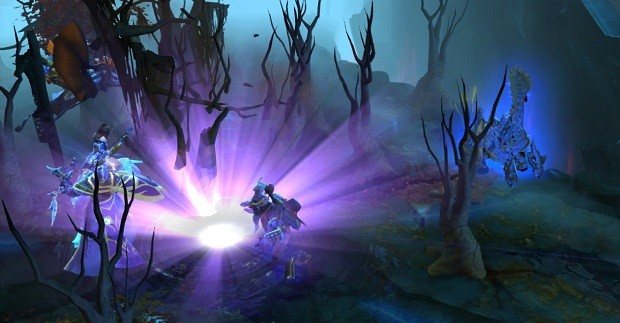 After Team EG backed up, Alliance started the beginning of the comeback with EGM's Silencer becoming a major player in the game. A 5-man battle went down middle with a double global silence followed by a triple kill for EGM. With a wealth of stolen intelligence plus a BKB to keep his Refresher Orb company in his inventory. Team EG decided to go Roshan but Alliance went for an uncontested tower and rax. By this point Arteezy was dead weight, EternalEnvy was six-slotted and Alliance had 5 buybacks available. At 59 minutes, EG went all-in at Alliance's mid tier3. In a chaotic fight 9 buyback were used up, with Loda getting ultra kill on Mirana, and a nice cheese pass from Arteezy to EternalEnvy mid-fight.

Genius play by Universe on Dark Seer setup a fight (video below) outside Team EG's tier 3 which gave Team EG the 115 second window to go for Alliance's base after they killed Silencer and Loda. EternalEnvy got to work quick charging into Alliance's base killing off Mid and bottom rax to give EG mega creeps. Alliance stormed back into EG's base with mayhem ensuing, global silence was used and Alliance looked like they had it in the bag but Loda was smacked down at the last second. This was the moment, this was the chance for Team EG, Arteezy psychopath mode was enabled and he remnant charged down two Alliance supports and EG looked like they could actually win this game after being on the brink of despair.

Universe turns it around for Team EG

The move was the final turning point of the game with the death of Alliance's Silencer, Bat Rider, and Loda's Mirana twice. Team EG's mega creeps helped to finish off the enemy's throne. WHAT A GAME, without doubt the best game of the competition so far.