RoX.KiS that went on into the early hours of the morning. 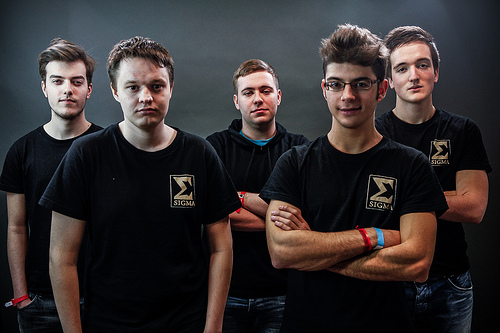 Team Sigma at EMS ONE (photo by ESL)

It is the second time

Team Sigma have triumphed in an online competition having won BigPoint Battle 10 in November last year. However, the Pinnacle Sports DotA 2 Pro-Am was slightly more challenging given all the playoff matches up until the grand final were best-of-3 not best-of-1. Sigma disposed of

Fnatic - albeit with two stand-ins, without dropping a game.

Their final opponents were

RoX.KiS and the two teams proved to be evenly matched. Sigma took the lead after winning the first two games but the Russians bounced back forcing the series into the fifth game. With the time well-past midnight for the Russians they conceded defeat. Sigma are to be rewarded with €7,500 for first place whilst Rox.Kis will receive €2,500.