posted by Vekus,
The Grand Final of the Pinnacle Sports DotA 2 Pro-Am will be between Sigma and Rox.KiS at 9pm CET tonight after they both fought their way through the single-elimination bracket. Sigma have yet to drop a map and Rox.Kis reach their first final in 8 months.

Sigma have had a good run through the competition, eliminating Relax and Empire in the first two rounds followed by a close match with Fnatic last night. Fnatic, who competed in the D2L with two stand-ins, once again played without their standard line-up, as both n0tail and fly did not play in the semi-final match with Sigma yesterday but still put up a good fight.

Rox.Kis on the other hand were almost out of the running for the Grand Final after falling one game behind versus PrettyBoySwag, the American-based team who eliminated Speed Gaming. In the second game however, Rox.Kis completely tore apart PBS, and then finished off the series to reach their first Grand Final in 8 months. The grand final is for $10,000, with $8,000 for first place.

Match of the Day: Fnatic versus Sigma


In game 1 both Fnatic as well as Sigma.int went for an early- to midgame orientated lineup that could fight early. Surprising were the Pugna and the Nyx Assassin, but both worked out rather well. While Fnatic decided to play a safe trilane with Venomancer and Rubick to guard their Night Stalker, Sigma.int decided dual lanes would be the way to go. These resulted in the odd compositions of Nyx Assassin and Crystal Maiden Top, while Mirana and Abaddon went against Fnatics defensive trilane.

The first 3 minutes went rather peacefully until Hanni´s Rubick found an invis rune and tried to get a kill out of the 3 versus 2 situation. This was a perfect example why you never want to initiate on an Abaddon since he was able to deny himself with the mistcoil and allowed Invoker to claim the firstblood with a sunstrike. Despite the Mirana dropping as well making it 2:1 in the end for Fnatic, Sigma came out ahead.

The action continued just 90 seconds after as Timbersaw, forced away from the toplane tried to kill the mid Invoker together with Pugna. Invoker made it past his tower but was so low on health that it looked like a good idea to dive him for the kill, however Timbersaw underestimated the Coldsnap and ended up dropping. This together with the firstblood gave FATA the much needed goldboost, since he fell behind Arises' Pugna further and further. The game stayed even with 2 kills on Paris Cc's Nyx Assassin who was unaware of the amount of Sentries Fnatic could have.

At 12 minutes the first big engagement broke out as the squad of Sigma.int tried to push down Fnatics middle tower. Three of Sigma´s heroes were too far out and the Maiden left the world of the living rather quickly. However, Invoker turned out to be too tanky, surviving the chase due to his Mekansm and ended up claiming 2 kills.Two other engagements took place at the 13th and 16th minute mark while the teams tried to push. Kills were traded back and forth but in the end nobody managed to get an advantage out of it.

Sigma.int decided to take the first Roshan of the game completely uncontested at 19 minutes but failed to capitalize on it. Instead, Fnatic found some good pickoffs giving them the slight edge in the approaching midgame with a 16 to 14 score at 21 minutes. The response of Sigma.int was clear: splitpush, farm and try to kill lonely wandering opponents while not getting involved in teamfights. The strategy proved to be effective as they pulled slowly ahead in kills and managed to break the first Tier 3 tower at 31 minutes with the new Necrobook on Invoker.

Fnatic had the urge to fight with the fresh BKB and the Necrobook of Pugna but didn´t take into account the entire squad of Sigma.int had BKBs at this point as well. Initiating on an Abaddon can be expensive and they once again paid the price for it with two kills. The game remained even with jsut a slight edge for Sigma.int until the 36 minute mark.

7ckngmad and company wanted to claim their second Roshan of the game but Fnatic spotted it and rushed there. However, their arrival was too late and their retreat too slow, since Sigma.int managed to kill Roshan and go on a crazy hunt afterwards killing off four of Fnatic's heroes while giving them only an aegis-carrier kill in return.

After the teamwipe they rushed down middle and managed to take down the second T3 tower and the melee barracks. After that point the game stagnated with Fnatic deperately trying to find pickoffs while Sigma.int farmed the next set of items to break the base. FATA decided to go for the uncommon Eye of Skadi on Invoker which worked out really well. The last stand was made at the 43 minute mark, where Hanni and Co. tried to fight off the French squad only to get teamwiped again forcing the gg. 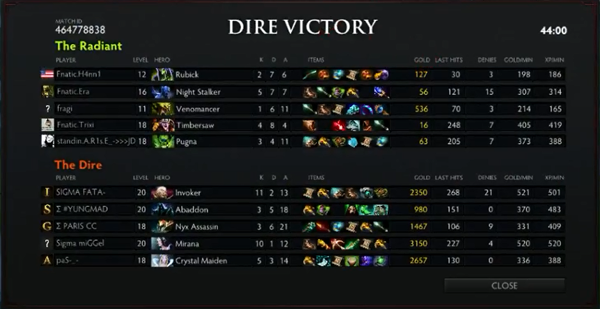 
In game 2 Fnatic went again for a very midgame lineup around the triplecore of Batrider, Luna and the infamous Bristleback. Sigma responded with a tricore including Lifestealer, Slark and once again Invoker. Suprisingly enough Leshrac made his comeback into the competitive scene giving Fnatic a lot of early pushing potential together with Venomancer. In terms of supports Sigma went rather conservative with a Shadow Demon as well as a Crystal Maiden.

This time Fnatic decided to run odd dual lanes seeding the squishy Luna plus Venomancer bottom and Bristleback and Leshrac top. Sigma answered wisely with a solo offlane lifestealer who went toe to toe with Bristle. The bottom lane proved to be working out as well with them getting the first blood on Venomancer. Once again FATA proved his map awareness with sunstrikes.

After securing an advantage for their safelaning Slark, 7ckngmad and paS decided to roam the map first together, then individually securing them a total of 6 kills in 7 minutes giving their tricore a significant advantage. While only getting one kill upon the Lifestealer with a well executed Batrider gank, Fnatic decided to take the fight on the shoulders of their Bristleback with an impressive 7 minute Vanguard. This lead to a 7-5 score at 9 minutes.

Just one minute later H4nn1 and Era learned the hard way that Slark is a slippery fish, feeding him a double kill in an attempt to gank him. At the same time 7ckngmad's squad captured the Venomancer out of position leading to Bristleback trying to rescue him and get some kills. Despite his impressive tankiness he couldn´t do much against three heroes and dropped together with the Venomancer he wanted to rescue. FATA once again proved the effectivity of an early Mekansm on the midhero, even if it is an Invoker.

Splitpushing and ganking was the name of the game once more as Sigma.int continued to pull ahead by pushing towers and getting a couple of solo pickoffs. Although Fnatic tried their best to fight back, they were unable to take the lead with a 18 -8 scoreboard favouring Sigma, a five tower disadvantage as well as a free Roshan for the French squad at just 20 minutes.

Slark turning on hunter-mode as well as some overcommitments by Fnatic lead to an even further advantage for Sigma.int, cranking up the scoreboard to a 21-8 lead. Comforted by that Sigma grouped up to push in through the bottom lane slowly rattling down the T3 tower with Forge Spirits and Necronomicons. The final fight eas at 26 minutes leading to a four man wipe against Fnatic once again and the 'gg' was called seconds later. 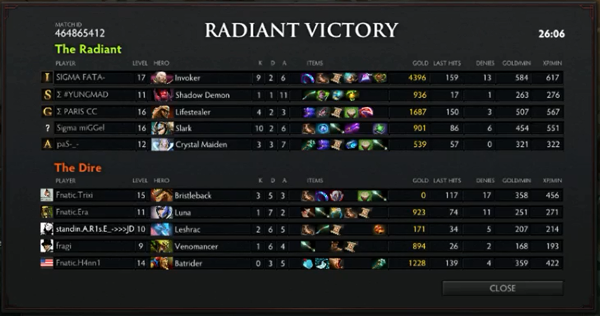