posted by Rowdy Mouse,
In today's 2nd Semi Final matchup at the Dota 2 League, A handicapped Fnatic faced LGD.cn without Era and H4nn1. The games showed just how much these core players contributed to the team's success. Here are the short recaps and endgame stats of the matches.

In game one, LGD stormed to victory with a very powerful 5 man push strat. Their surprise Necrophos pickup added a lot of survivability to the push. NoTail's Chen took first blood on Xiao8's Venomancer at the four minute mark while both teams settled into some passive play until about 8 minutes into the game. Fnatic's lineup needed time to really get off the ground with Slardar, Lifestealer and Storm all struggling to find farm amidst the destructive path LGD was carving out. Destroying every tower on the map by the 16th minute, LGD secured a insurmountable early game gold advantage of nearly 10k, resulting in a quick GG call from Fnatic. 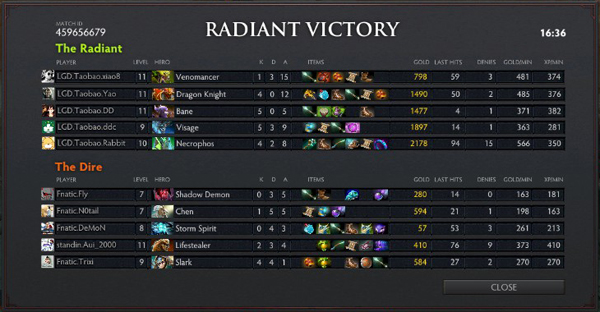 In a much longer game, Fnatic had a rough start but was able to keep in the game through some fantastic plays by Trixi on the Nature's Prophet. The glue that held his team together, Trixi got multiple hero denies on his Doomed comrades as well as taking towers and helping his team pick off stragglers wherever possible. In the end even Trixi's work couldn't keep LGD from taking the game as Yao's Razor combined with Rabbit's Lifestealer proved too strong, ending the game with a whopping 43 Kills! 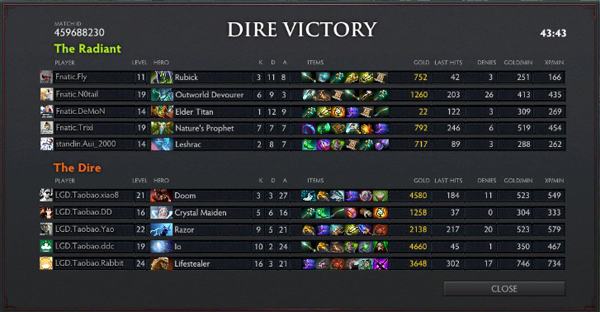