joinDOTA League: Global, for everyone!

posted by HolyMaster,
In 2013 we have hosted a total of 26 open Dota 2 tournaments. Now it's time to do the next step. While short cups are great for a lot of people, it was still our goal to make joinDOTA an even more stable place to compete for teams of any skill level. A place to consistently play matches at every week, yet without requiring too much of a commitment from participants. Today we're very close to reaching that goal. We proudly present the joinDOTA League.

Before we introduce our new league, let's do a quick flashback. DotA veterans might remember Pick League, hosted by Dota-League for a very long time. Before it shut down in 2011, Pick League was the most consistent place for European amateur and semi-pro teams to compete. Checking the current the division and position of a team within PL became the most simple way to roughly estimate its skill level. While Dota 2 brought many amazing improvements to the competitive scene, nobody has - in our opinion - been able to adequately fill the gap that Pick League has left behind. joinDOTA is hoping to do that by introducing the joinDOTA League with a similar format.

How does the joinDOTA League work?

The joinDOTA League (short: jDL) will be a league system for an infinite amount of teams divided into several divisions. The best teams will play in Division 1, the next best ones in Division 2, and so on and so forth. The number of divisions depends on the amount of participants, we expect there to be 5 or 6 in Europe by the end of the year. When a season starts, each division will be divided into groups of about ten teams. Division 1 will only be one group, Div 2 will have two or three, Div 3 even more, and so forth. All teams within a group face each other throughout a season in a two game round robin format to create a group ranking.

At the end of a season, the best performing teams from each group get promoted to play in a higher division in the next season, while the worst performing ones might get relegated. Some will have to play playoff matches to decide about their future division. This way you can climb up or down the ladder from season to season. Prize money is only paid out for the teams in Division 1 (also called Premier Division). The goal for everyone else is to get promoted to the Premier Division - or to just play good matches for fun.

In order to avoid server and time zone issues, we're not starting one, but three different leagues. One for Europe (including Russia, Africa, and parts of West Asia), one for America (North & South America), and one for Asia (mostly SEA, also including Australia). These three leagues will run separately from each other to avoid high ping matchups. While it's highly recommended for everyone to sign up for the league according to their region, the final decision is left to the teams themselves based on their server and playtime preferences.

On top of the strict separation into three parts of the world, some parts of the leagues are going to be even more regional. Some very significant Dota nations (like Russia, Sweden, or Germany in Europe) will have national groups in lower divisions. Those are embedded into the whole league system and do not make it easier or more difficult to be promoted, they are simply only for teams from the given country. Division 1 and 2 will be purely international. This way some teams get the great experience of competing within their own country, while everybody, regardless of his origin, still has an equal chance to get to the top. 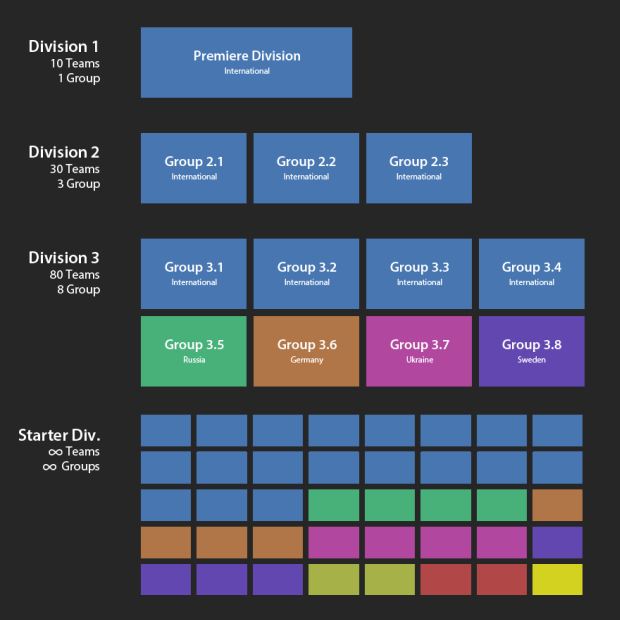 An example of how a list of divisions, groups, and regions might look like in jDL Europe Season 2 (the first season will be without division 3). Keep in mind that it's going to look slightly different in reality

What makes the jDL a stable place to compete?

The joinDOTA League is sponsor independent. Therefore it is guaranteed to run for a very long time with very short breaks in between two seasons. It won't suddenly stop in the foreseeable future. There'll be four seasons a year, each of them lasting about twelve weeks (including playoffs/relegation). That means the league runs throughout almost the whole year with minimal pauses.

You're going to have exactly one match every week in the jDL. The default playtime will be 16:00 CET on Sunday for the European League, The Asians will play a few hours earlier, the Americans later. Teams can always agree to play on a different day and time instead of the default one though. This way the joinDOTA League is also convenient for teams who can't commit two or three long evenings in a row for a regular tournament.

When and how does the league kick off

The sign-ups for the first season opens NOW!

A few known teams will be picked to directly start out in high divisions. In Europe, where we expect the most participants, we will fill Division 1 and 2, maybe even Division 3 right away. In America and Asia it might only be Division 1, depending on the numbers. Everyone else will be put into the starter division. The results in this starter division will decide about each team's destination for season 2. The number of divisions in each league is going to constantly grow throughout the first year, and will then stay quite consistent. Some details will not be decided until we know the exact number of participants.