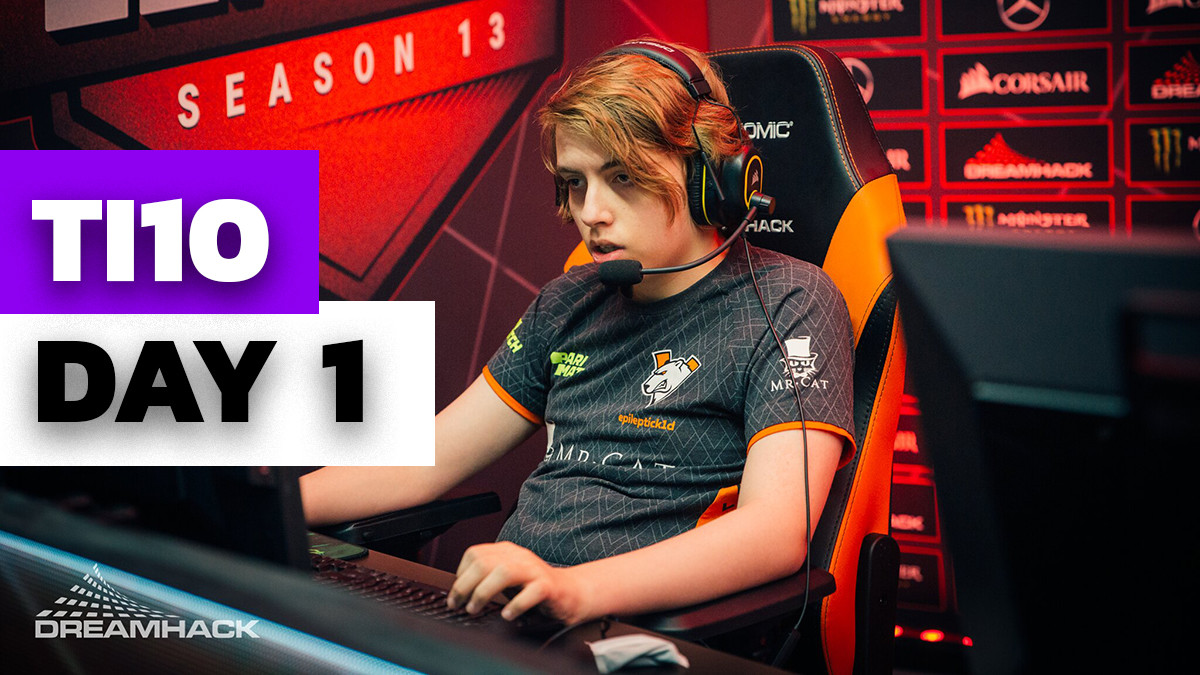 posted by NanaKrustofski,
We did our waiting! Two years of it! For TI! And now the first day of the most important tournament of the year is already over. For those who missed the action: No worries, we've got you covered with some of the highlight clips and the standings. Day 1 of the The International 2021 is over and featured many unexpected moments, amazing games and a lot to look forward to in the next days: From 7-17 October, we get to see the best Dota 2 in the world. And on Day 1, all 18 teams are still in the game.

First off, TI10 started with a "slight" delay. But once that was patched, the first long awaited games could finally kick off. On each of the first three days of the Group Stage, there are five blocks with four bo2 series each. Quick maths: There are 40 games in total happening each day.

That sounds like a lot of Dota 2 and apparently, there were a lot of people ready for that: According to EsportsCharts, the first day of TI gathered a peak viewership of over 1.1 million fans.

Before we jump into the standings, a short remark: Team Aster's midlaner Liu 'White ` Album' Yuhao could not play due to health issues and was replaced by Chen '86' Yu Xuan.

OG, Invictus Gaming and Virtus.pro are currently leading with a 2-1-0 standing, with each team having 5 match victories and 1 loss.

The shortest match of the day goes to Team Spirit vs PSG.LGD. The latter won the encounter after only 25 minutes.

King of kills after day one is Virtus.pro carry Egor 'Nightfall' Grigorenko. In the 56 minutes match against OG, Nightfall finished with a stellar 27/6/18 killscore on Dawnbreaker. His teammate Vitalie 'Save-' Melnic claims the crown for most assists, as he ended the game with 2/10/38 on Bounty Hunter.

The next games will start at 9:00 CEST tomorrow, 8 October. There will once again be four series happening at the same time, with Team Secret vs LGD being a highlight encounter.


Let's watch some highlights of the first day

n0tail brings some shade into the Group Stage

Dress for the job you want - with three crowns!

"The other game" that we don't talk about

You might see that line being spammed in the future

It’s time to fight! We’ll never hold back because We are PSG.LGD🔴🔵！
Thanks to @neymarjr, @GWijnaldum and Messi for the wishes to our team.
THANKS, @PSG_English, @PSGbrasil, @PSG_inside. We stand together✊🏻!
Welcome to The International！#TI10 #PSGLGD pic.twitter.com/OMeTl6atUo

Another heavy Ravage, coming from Fnatic

Doubt they saw this one coming. Closing out a banger day for the FNATIC Dota 2 Team at #TI10! pic.twitter.com/f95ipoJhpL