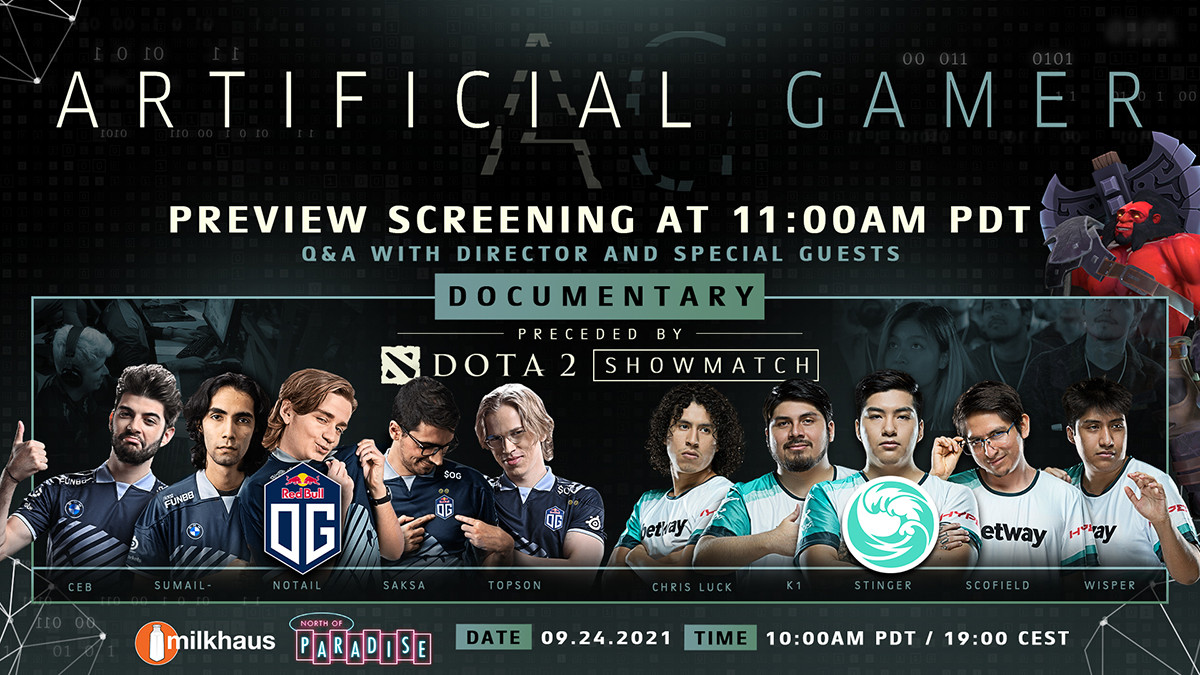 posted by NanaKrustofski,
Dota players, prepare your favourite snacks and get ready for a special Dota 2 documentary. Beyond The Summit will air the preview screening of Artificial Gamer this Friday, featuring a showmatch between OG and beastcoast. The war between man and machine will once again flare up as tournament organiser Beyond The Summit will have their special screening preview for "Artificial Gamer" this Friday, 24 September. The event starts at 10:00am PDT or 19:00 CEST and can be watched on the official Twitch channel of BTS.

Artificial Gamer is a documentary about back-to-back TI winners OG playing against an OpenAI bot - who managed to take down the reigning world champions. On top of the documentary, OG will face beastcoast in a showmatch beforehand. There will also be a Q&A session with the director of the documentary and special guests.

BTS is proud to present a preview screening of ARTIFICIAL GAMER, preceded by a showmatch of @OGesports vs @beastcoast on Friday, September 24th!

Follow the story of @OpenAI's journey toward taking on the World Champions of Dota 2. #artificialgamerfilmhttps://t.co/VZnt4kO1Z3 pic.twitter.com/1716sPEXVm

Beating the best team in the world

The event will be hosted by Austin 'TheCapitalist' Walsh and Kasumi "Sumichu" Yogi. Casters for the showmatch will be Owen "ODPixel" Davies and Dominik 'Lacoste' Stipic. The special guest is film director Chad Herschberger.

OpenAI is an artificial intelligence research laboratory founded by Elon Musk. Four years ago at The International 2017, a project was revealed where the AI was trained to play Dota. Midlaner Danil 'Dendi' Ishutin would then face off against the AI in a 1on1 mid clash but was defeated. The bot was then further trained and eventually took down OG 2-0.

To tide you over until then, take a look at the #artificialgamerfilm trailer below! 👀 pic.twitter.com/LYFhoUaSk2