How to play Winter Wyvern Mid like Tundra Nine 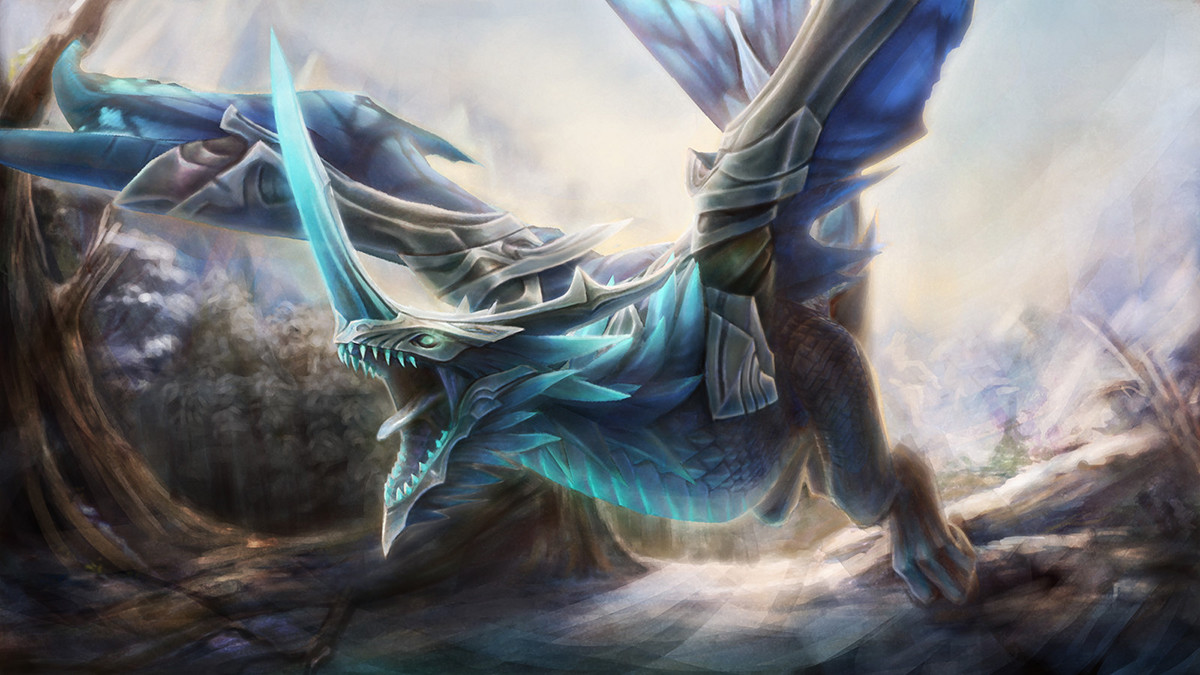 posted by Liightsdota,
Ready to conquer the midlane with a powerful icy beast? That's right, Winter Wyvern is not only a great support hero but can also dominate in a core position.
Players have always experimented with Winter Wyvern in core roles, but it always seemed to fall just short in previous patches. Last week, however, Leon 'nine' Kirilin of Tundra Esports almost eliminated OG from TI qualification by using his innovative Mid Wyvern build in two crucial games of the Bo5. Today we’ll look into what makes Nine’s build so powerful, and why Mid Winter Wyvern is currently the best it’s ever been.

To put some context to how much Nine believes in this somewhat unconventional mid hero, he played the hero in games 3 and 5 of his elimination series, where the winner attends TI and the loser walks away with nothing. If that doesn’t scream confidence in your hero choice, I don’t know what does. This Wyvern mid pick also knocked OG to the losers bracket when they met up with Tundra earlier in the qualifier. Although OG ultimately adapted for game 5 and were able to ultimately defeat Tundra, the Winter Wyvern pick completely took over multiple games, where Nine almost single handedly led Tundra to victory.

What makes her such a great Mid?

The primary reason this hero is picked as a core at all is that she has one of the most powerful carry abilities in all of Dota: Arctic Burn. If you’ve ever played Ability Draft, you’ll know that this spell is an absolutely mandatory first pick based on its power level alone. Hitting your opponents from a full screen away is so insane, simply because there’s nothing they can do about it. This huge range is impossible to effectively counter because her opponents will have to walk into Arctic Burn range to cast their spells, making it extremely painful trying to approach her.

When maxed, this spell causes Wyvern’s autoattack to deal 9% of her target’s current hp per second, for 5 seconds. This allows Wyvern to tear through the many tanky heroes which have been so prominent and problematic during the recent healing metagame. Percentage damage is going to scale excellently into the lategame where people have big health pools, though the opponent’s BKBs can reduce Wyvern’s damage output.

Winter Wyvern is a great fit for mid lane thanks to the quicker access to her crucial +50 damage talent at level 10, which should always be taken when playing her as a core. This in combination with her massive 3.6 intelligence gain allows you to actually deal respectable physical damage on top of her percentage burn. But these were always options for Winter Wyvern in previous patches where the hero wasn’t played successfully as a core. The difference-maker items that enable Nine’s mid Wyvern to succeed in today’s environment are Witch Blade and Aghanim’s Scepter.

How does Nine play her in Mid? 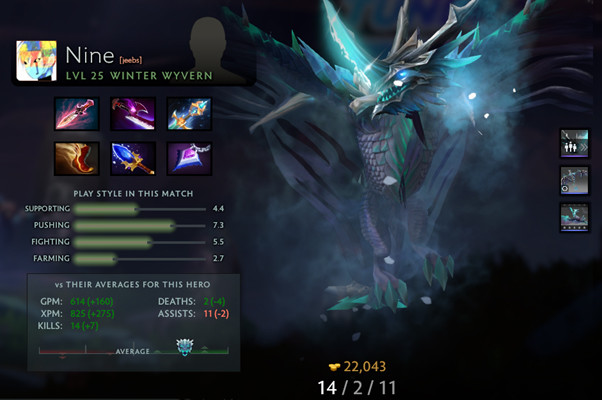 By going for minimal starting items: two ironwood branches and a magic stick, nine survives the start of the lane with zero regen to allow for a faster bottle rush. The magic stick start was because he was against a Void Spirit who would be spamming spells in lane. After that he purchases a single Null Talisman for a little more stats during the lane and then straight into Boots of Travel. Nine also likes having the additional mana regen provided by raindrops and a few clairities to help with spamming splinter blast as he farms.

Splinter Blast really helps during the laning phase, allowing Nine to always secure ranged creeps by combining the blast with an autoattack to ensure he doesn’t get that crucial additional experience denied. Though most of Wyvern’s middle matchups are actually quite favourable thanks to Arctic Burn harass, Splinter Blast helps loads in games where the lane isn’t going great. There’s always the option of just nuking the creepwave and rotating off to farm the jungle.

Winning the lane on this hero usually involves the opposing mid getting harassed off the wave, especially if they’re a melee hero, allowing Wyvern to secure pretty uncontested creeps. This hero doesn’t offer much solokill pressure early into the game, but we’re playing for a later carry timing with Boots of Travel, Witch’s Blade, and Aghanim’s. The 11 minute Boots of Travel which nine completes as his first major item synergizes incredibly well with the 25% movement speed bonus from Arctic Burn, allowing him to catch up and outmaneuver pretty much anybody.

Nine continues to prioritize farming towards his Witch Blade, using his reduced teleport cooldown to show up whenever a skirmish is happening somewhere on the map. By allowing Tundra to constantly have their strongest hero on the map available to arrive while he’s farming, his team is able to play more confidently even if he’s on the other side of the map. Due to Wyvern’s ability to damage creeps from afar as well as fly over trees, Nine is able to take quite dangerous farm, opening up safer creeps for his carry hero.

After completing Aghanim’s Scepter at 22 minutes, Nine is totally ready to fight. He begins playing completely differently than before, no longer prioritizing farming so heavily, and instead hunting for kills with his supports. He simply flies over the edges of the trees on sidelanes, waiting for an enemy hero to dare show up. After a couple Arctic Burn hits from off screen and a stun from a Support, Wyvern is able to kill any hero in the game.

Wyvern’s Aghanim’s Scepter is so strong because it enables Nine to re-apply the Arctic Burn debuff over and over again to the same target, burning their health pool down entirely. Without the Scepter you’re only able to place the debuff on a target a single time, and subsequent hits don’t refresh it.

One thing this hero lacks is building damage, as her steroid skill only helps against heroes. Tundra counteracted this by drafting Broodmother and Luna as their other two cores, allowing Nine’s Wyvern to focus on orchestrating perfect teamfights for them.

In the third game of the series between OG and Tundra, Nine’s Wyvern completely ran away with the game. He was devastating pushing the sidelanes from the treeline, and he was able to easily kill OG’s heroes who showed up to divert the push. Tundra had lots of tanky heroes to play in front of the Wyvern and make it even harder for OG to approach him. By going for Boots of Travel as his first item, Nine started applying this continual attention to the sidelanes from very early on in the game.

Conversely, in the game 5 of the series, OG gameplanned to address the splitpush that they knew would be coming out again from Nine’s Wyvern. In this game they were able to pick Templar Assassin, who’s Aghanim’s Scepter let her instantly appear on a trap she placed to hunt the Wyvern on the sidelanes. Additionally Nyx Assassin and Pangolier were able to catch Wyvern and keep Nine playing a more scared and defensive game.

Winter Wyvern Middle is absolutely the real deal, as Tundra Nine demonstrated by playing the hero in the most crucial matches of his TI qualifier. The Wyvern mid pick knocked OG down into the losers bracket, and defeated them twice. Hopefully now it won’t be quite as much of a shock when you see somebody following Nine’s build in your pubs.