posted by Sun_Tzu,
The Defense Season 4 has ended after a hectic finals series, and for those of you who missed the games do not worry, in anticipation of the VoD's being uploaded right now we've got you covered for the recaps of the games. Links to the VoD's will be added tomorrow morning as they are done.

Game 1
Kaipi went for an offensive trilane with Mirana, Naga Siren and Enchantress in the offensive jungle, which helped shut down the Alchemist of

Alexander 'XBOCT' Dashkevich, who was forced into postponing his Goblin's Greed. With

Jacky 'EternaLEnVy' Mao destroying on the top lane with Weaver, claiming the first blood of the game at 7 minutes in.

Kaipi amass a solid lead by 10 minutes, being up 4-1, at which point they move out of their offlane and leave XBOCT to try and get himself back into the game, however he had little luck as Arteezy farmed out of control, and by 23 minutes the first big teamfight of the game ended with the score now standing 10-2 in favour of Kaipi, even after

Wehsing 'SingSing' Yuen ended his Song of the Siren just slightly too late, wasting the entire Requiem of Souls.

After this point the fights just kept on going in Kaipi's favour, going up to 15-3 a minute later and another 7 kills being added for Kaipi over the next 3 minutes, with Na`Vi calling the 'GG' at 27 minutes in, 22-3 and only the third time since TI2 that they've been held at 3 or less kills in a game. Heroes of the match were Arteezy doing his 8-0-8s & Heartbreaks on the Shadow Fiend while 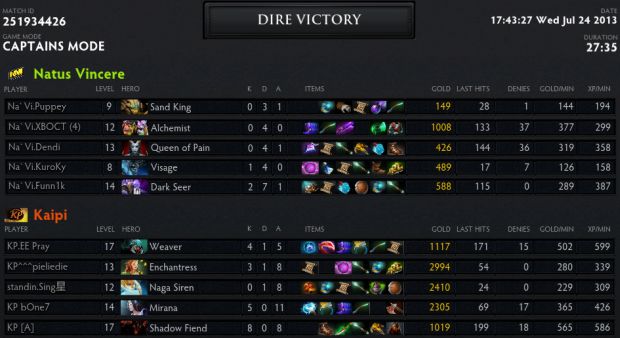 Game 2
Things looked good early on for Kaipi, who got the early lead after Arteezy was able to handily win mid lane with Puck up against the Dragon Knight of Dendi, even with Na`Vi trying to come into help him with multiple hero rotations. A crucial part in his was also played by

Johan 'pieliedie' Åström on Bane, who skilled Enfeeble level 1 and used it to force Dendi into only being able to farm with his Dragon's Breath, which meant he did not have his stun in order to help out in early gank attempts.

Still Kaipi kept on giving their leed back through small overextensions, with Arteezy losing his life in mid to a hidden

Clement 'Puppey' Ivanov Alchemist as well as further kills slowly going to Na`Vi on each lane. This allowed Na`Vi to get into a position where they were able to take a 17 minutes Roshan, although losing their Courier to bOne7 on the Nature's Prophet, who had warded up their base in order to find these snipes.

The crucial moment of the game came at 25 minutes on bottom lane, with both teams neck and neck. Na`Vi pressured the Tier 3 Tower with two Kaipi members defending while the other three were up on top lane trying to split push. As they waited too long to teleport in to defend, by the time they did things went all wrong, as Na`Vi were already up on the highground and were able to tank up the damage, decimating Puck through stuns and with the Global Silence from Na`Vi disrupting all of their ability to fight at the crucial moment. Na`Vi back off with a free Barracks, finding another kill a few minutes later on Arteezy and then taking the second Roshan of the game.

With yet another Aegis they go in at mid, this time against bOne7 trying to split push up top and doing a better job of it, but being unable to get the Tier 3 Tower down before Na`Vi had taken yet another half lane of Barracks down. A few minutes later on top lane Na`Vi win yet another fight 4-2, causing Kaipi to call the 'GG' at 31 minutes in. 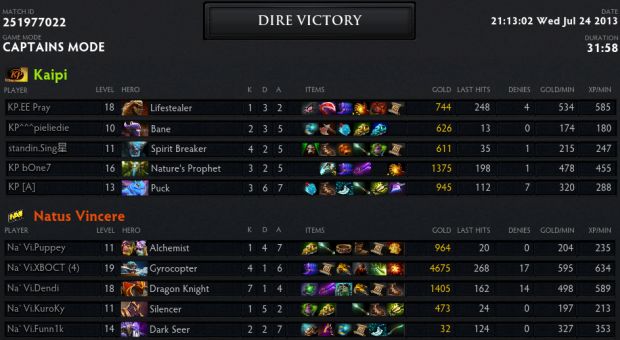 Game 3
If ever a lineup has made no sense, suddenly for the third game we had XBOCT on a safelane farming Venomancer backed up by a support Alchemist, while

Kuro 'KuroKy' Takhasomi went jungling on Ursa, leaving Funn1k to dominate the top lane 1v1 match-up on Mirana and Dendi to take over mid with his Zeus after Arteezy underestimated the power of Heaven early on.

With Dendi going for the Blink Dagger after his Bottle and Funn1k seemingly hitting every arrow on the map, it ended up not mattering that Na`Vi had had a rough start on the bottom lane, especially with XBOCT delivering the slows for Kuroky to do the damage, the few times he could be bothered to come join fights and not just try to farm or kill Roshan's while the rest were diving towers after yet another long range Arrow by Funn1k.

While Kaipi were able to trade fairly well early on, they just did not have an answer to the Mirana in the mid game, as they were overrun 33-15 by 24 minutes, calling the 'GG'. Funn1k racked up 10-1-9 and Dendi 8-1-13 respectively on the hyper mobile diving duo Mirana and Zeus. 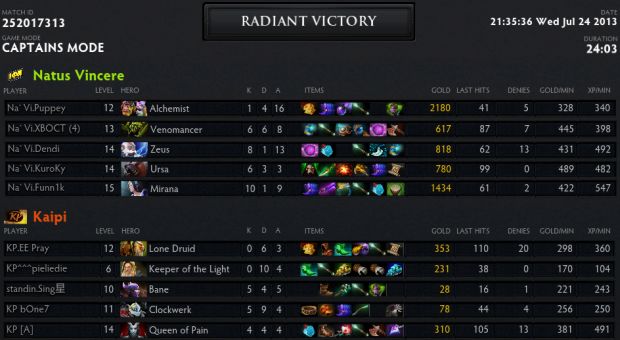 Game 4
Early aggression went the way of Na`Vi, with Dendi on Pudge taking over the mid lane entirely while their safelane punished bOne7 on the offlane Clockwerk. Still this left Kaipi absolute freefarm on their own safelane, as Funn1k was dodging into the jungle on his Nature's Prophet, but this only lasted for so long as Na`Vi quickly started their rotations, taking away space from Kaipi and starting to put pressure on their safelane as well.

While Dendi ran the early game, his snowballing stalled a bit in the mid game, as he no longer found as many kills. This is not to say that Na`Vi let up in any way, as it was instead Funn1k and XBOCT who came to run the show, with each of them adding on kills and assists while avoiding dying entirely.

The game quickly devolved into a Na`Vi ganking fest, not unlike game 3, as by 24 minutes Na`Vi had racked up 24 kills to the 3 of Kaipi, one-upping their Game 1 performance and taking the series. Funn1k ended 5-0-10 on Nature's Prophet and XBOCT 6-0-6 on the Lifestealer. 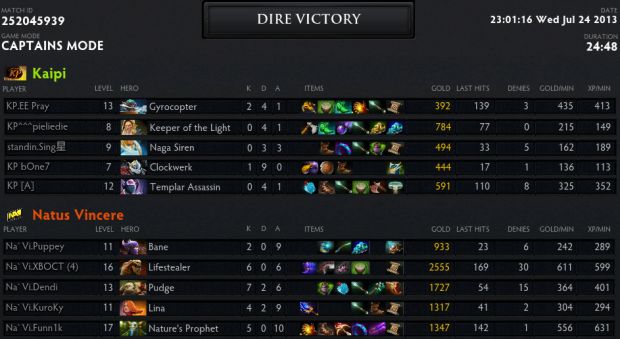 
For all who want to win a brand new EIZO Monitor, the FORIS FS2333, just click onto the banner below and check out the currently running "The Defense raffle" under "Win Here"