StarLadder 6 has its Champions!

posted by Sun_Tzu,
In the finals of the Sixth Season of the StarLadder Star Series defending champions

The Alliance faced off against an unexpected challenger, as hometown heroes

iCCup had upset both

Virtus.Pro on their way to the finals. 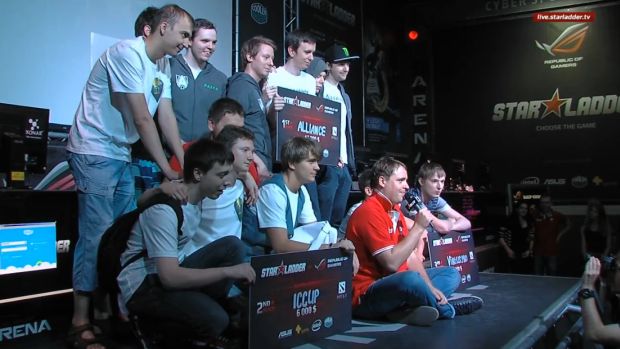 The Alliance have a one game advantage for coming through the winner bracket.

Jonathan 'Loda' Berg on the safelane with Lifestealer, sending

Henrik 'AdmiralBulldog' Ahnberg got his hands on Bounty Hunter, messing up life for

Maxim 'Jackal' Doroschenok on the Weaver as well as

Oleg 'wejustzik' Zinovenko on the Lion, with wejustzik being punished by losing his life for trying to pull the creeps of the Bulldog. Finally for iCCup

Andrey 'Mag' Chipenko ended up in the safe jungle with Dark Seer.

After the first blood it was all about iCCup aggression, as they rotated up top in order to kill off Akke followed by finding a kill on Bulldog at the bottom lane before going up top to mess with the Alliance trilane, where Resolut1on delivered the big plays in order to find two kill, including one on Loda, without giving anything up in trade. After ganks going so well for them the hometown heroes got a bit carried away, diving into the Swedes jungle, where an unfortunate set of Cogs by alwayswannafly caused them to feel the pain of the s4 Dragon Knight, who played a big part in evening out the kill score for the Alliance.

At 15 minutes on the top lane, iCCup made another ill adviced dive, overstaying their welcome against the power of Dragon Tail and Shackle Shot and unable to kill off the tanky frontline of s4 and Loda, they got the fight turned against them big time losing 5 heroes for 2, as the Alliance well and truly took back control of the game with the benefit of Track working in their favour after what had looked like a bit of an rough start.

Another big fight broke out at 20 minutes at the Roshan pit, as the Alliance looked to abuse their Dire side advantage. With alwayswannafly suiciding in at first and Jackal chasing Bulldog but failing to catch him, it all went the wrong way around as Akke dropped another Sentry after iCCup backed off, just in time to catch Jackal trying to come in for the steal. While Akke lost his life for it, so did Jackal, allowing s4 to pick up the Aegis while Loda kept on snowballing out of control, confident that he was looking too tanky for Ukrainians to kill off even once, much less through his Infest as well.

After a highly unfortunate mistake by Resolut1on, using Flaming Lasso on an illusion of Bulldog, the Alliance had their opening and took another good fight, killing off Jackal crucially and pushing down mid lane, only to have s4 taken from them before Akke even had the time to use Hand of God, with the Aegis already having been reclaimed. As the Swedes backed off Resolut1on tried to give chase, but a fortunate bash from Loda saved his life and forced iCCup back to their base.

At 31 minutes Resolut1on was again at it, finding a pick-off on s4 outside the Alliance base and the opening for a big engagement. Even as they claimed the life of Bulldog afterwards, he got out his Tracks and they were doing work, allowing Alliance to keep up with whatever Jackal was trying to make happen and helping

Jerry 'EGM' Lundkvist find those game-changing Shackles he is known for. With iCCup chased off once more, the defending champions went straight into the Rosh pit, getting an Aegis this time for Bulldog.

As the Alliance once more picked off Jackal, this time while he was farming his own Ancients, they had the opening they needed to engage at mid, claiming the first Barracks at 35 minutes into the game. This caused both teams to slow down for a bit, until Resolut1on once again was there with the Flaming Lasso, pulling out Loda who had been farming creeps on the top lane under his Tier 3 Tower, killing him off and forcing the buyback at 41 minutes of play. After picking off Bulldog as well, iCCup backed off, giving away Mag as a sacrificial lamb, who died at the Dire Secret Shop moments before Roshan respawned, allowing the Alliance to put an Aegis on EGM this time, who with his Orchid Malevolence no longer looked much like a support at all. The only trade iCCup were able to get was Jackal sniping off the Tier 3 Tower at top lane before he backed off safely.

The next big teamfight broke out at 44 minutes at the top lane, with the Alliance coming out on top at first, killing off Jackal and wejustzik for the prize of Bulldog and Loda going low, only to have Jackal buy back and re-engage into the fight just as Mag managed to interrupt the Teleport of Loda with his Cogs, killing him off without a buyback and allowing iCCup to chase and claim the lives of EGM and Akke. With much of the Alliance on the sidelines, iCCup got their opening to claim the top Barracks before they backed off, giving away alwayswannafly to secure their retreat.

Another fight broke out in the Radiant jungle at 50 minutes, as Jackal got chased around by the Alliance and picked off while Resolut1on once more found out Loda, only to have him sent back by Akke in the nick of time, opening it up for the Alliance to come back and try to siege the bottom lane, only to have iCCup come out of their base and kill off Loda and taking the fight. By killing off the Alliance supports they also created an opening to go back in at top lane, claiming what was left of the top lane Barracks before backing off.

As Akke and EGM respawned the Swedes gave chase, managing to trade s4's life for that of Jackal who had his buyback on cooldown. As s4 bought back the Alliance charged down mid lane, claiming the Throne at 54 minutes of play at the end of a very intense game.

The Alliance went for an offensive trilane with Loda on Phantom Lancer backed up by the Keeper of the Light and Rubick against Jackal's Weaver together with Lich and Visage. As iCCup tried to dive to kill Loda early on, the L-God was able to juke into the trees while Bulldog on the Nature's Prophet teleported in from the bottom lane, helping to wipe the top lane and score a second kill on Jackal as he Teleported back in. Topping this off, s4 with his Puck dove on Resolut1on's Dragon Knight at mid lane, getting a further kill before going down to the Tower himself.

And then the game crashed, forcing a reload. Luckily, this went off without any major issues and the game resumred at 5-1 for the Alliance.

At the reload it became evident that Bulldog's excursion up top had allowed Mag to continue getting further ahead on his bottom lane Lifestealer. But Bulldog was ok with it, as he was able to keep on rotating around the map, going to mid lane in order to help s4 find another kill on Resolut1on who was playing a bit far out with a Haste Rune. Unfortunately for iCCup, Sprout does not carre about Haste. Next up on Bulldog's trip around the world was again a rotation to the top lane, helping out finding another two kills as the lane went entirely against the Ukrainians, and capping it off s4 rotated to the bottom lane to find a kill on Mag.

Playing from behind once more, iCCup abandoned the top lane and tried to push at the bottom lane instead, finding out EGM as well as an odd mistake by s4 who Teleported into the middle of the iCCup team, giving away another free kill and making it 9-3, however they still lost their first Tier 2 Tower at the same time on top lane, as they still had a long way to go to come back into the game.

Avoiding head on fights, iCCup were able to find some key kills on Loda and AdmiralBulldog and trading supports, as they began their slow treck into the game. However the Alliance still kept control of the game and the time to strike before Loda got out of control was growing ever shorter.

Still iCCup kept on finding openings, especially with the Alliance playing very deep in, on their oppoents side of the map. This allowed iCCup to get further picks on Bulldog on the Dire jungle as well as finding out s4 who went diving in deep to kill the opposing team's Lich, only to fail to quite get out in time, getting picked off above Roshan's Pit, which prompted iCCup to get their hands on an Aegis.

The next Aegis went to the Alliance however at 27 minutes, causing them to push in at mid lane as Loda had his Diffusal Blade, Manta Style and a Vladimir's Offering up as well. However iCCup mounted a good defense, managing to force the Swedes back and take kills on both s4 and Bulldog once more. This seemed to be the story for the next while, as iCCup were able to keep the game alive a bit longer, trading kills mostly at the expense of the lives of their supports, who were responsible for more than half of all deaths of iCCup.

Unfortunately these tactics could only work for so long, as eventually a fight went badly against them at the wrong time, opening it up for the Alliance to push in through the top lane at 35 minutes of play, managing to find kills on Mag and Resolut1on as well during the defense, allowing them to keep on rotating through the Barracks until the 'GG' was called at 37 minutes in.

The Alliance defend their title by defeating iCCup 3-0 after closer games than the numbers would imply.