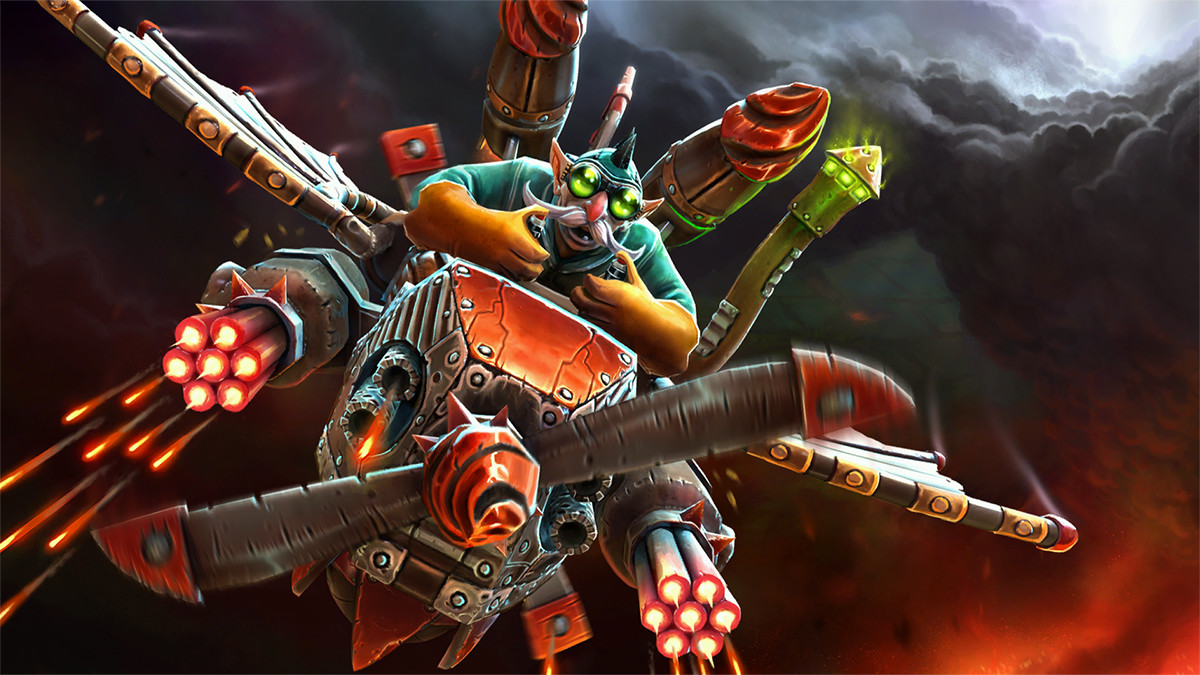 posted by Liightsdota,
Why play Crystal Maiden for the 457th time when you can also experiment and discover fun new strategies with typical core heroes on position 5? There was a major shift in the metagame at the ONE Esports Singapore Major 2021, with a huge focus being placed on the early game. This led to many drafts which didn’t feature a conventional carry hero at all, as well as many unique picks that we hadn’t seen before. In order to adapt to these changes as well as conceal the true positions of their picks, many teams found success at the Major while playing some extremely unconventional Hard Support heroes.

Being a walking ultimate works on Hard Support Tidehunter 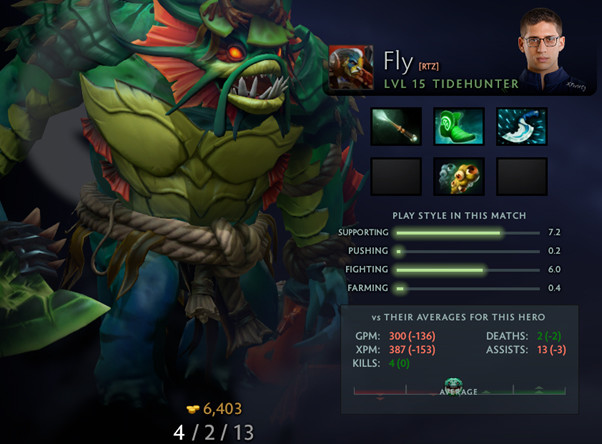 In a crucial playoffs match that included the two teams that would eventually face each other in the finals, Tal 'Fly' Aizik of Evil Geniuses played a Hard Support Tidehunter against Invictus Gaming. Fly made this strange hero work as a Hard Support largely based upon the armour reduction provided by Gush. By heavily prioritizing leveling this spell for its offensive capabilities, he was able to supplement the many physical damage heroes on his team, which allowed them to secure easy kills on weakened opponents.

While the hero may not be as tanky when played in the Hard Support role instead of as a Core, the massive teamfight provided by Ravage is too good to pass up out of the Hard Support role. As a position 5, you’ll want to play Tidehunter towards the back of your team during engagements to accommodate for being a little squishier than usual. Just staying alive and holding onto your ultimate constantly threatens a deadly turnaround on the opponents if they dive too deep into your team. As long as you’re able to cast your ultimate successfully and Gush a few people, you’re getting plenty of impact from the hero.

For itemization, Fly only purchased bare-bones support items like Magic Wand and Tranquil Boots, before heading directly towards acquiring a Blink Dagger as soon as possible. While people have said in the past that Blink Tidehunter feels like simply a walking ultimate, having that out of your Hard Support is actually completely fine. In the game EG played this hero as a 5, there was room left in the draft for a Beastmaster from the Offlane. This allowed Beastmaster to serve as the primary initiator, as well as purchase all the aura items, which let Fly simply worry about landing impactful Ravages. 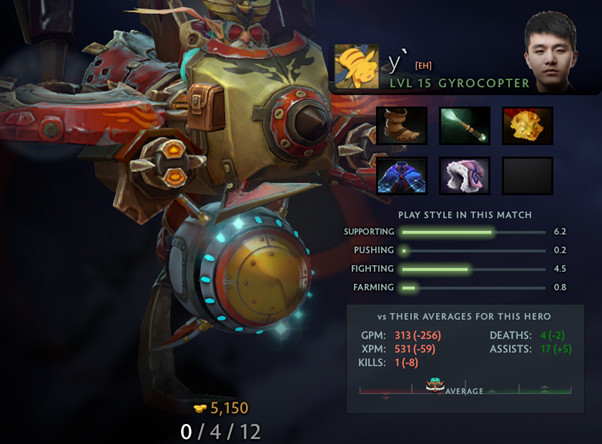 PSG.LGD managed to make a miraculous run in this event, playing through the Wild Card and continuing a dominant performance into the semifinals that included knocking tournament favourites Team Secret into the Lower Bracket. In the semifinals, PSG.LGD managed to take a game off Evil Geniuses using a Hard Support Gyrocopter played by Zhang 'y`' Yiping. When played as a position 5, y` focused on maximizing the hero’s early game damage and crowd control. This hero has the opportunity to play an extremely aggressive laning phase when he doesn’t have to worry about last hitting creeps.

In this particular game, the lanes were constantly switching from both teams, each trying to find a laning setup that was advantageous for their side. Under these circumstances, y` was happy rotating around to different lanes, showing up to gank Middle and Top extremely early in the game. By maximizing Rocket Barrage and Homing Missile, Gyrocopter presents an ever-looming threat to any lane he arrives at, forcing opponents to run under their tower or simply to die when a rocket is chasing them.

After a personally difficult early game, y` managed to get his level 6 while Evil Geniuses were attempting to contest his team’s triangle. By simply using his Call Down and casting Homing Missile on the enemy support, the Hard Support Gyrocopter is able to push the enemy team back into a panicked retreat. This allows his team to chase onto the targets stunned by Homing Missle and kill three enemy heroes, securing the first Roshan for his team and swinging the game so strongly in LGD’s favour that EG was never able to recover.

The biggest thing this hero brings to a team as a support is the simple reliability of his stun. Once that missile is out towards a crucial enemy hero, they *will* eventually get stunned. When played with a coordinated team like PSG.LGD, they were able to take advantage of this guaranteed stun to dive deep onto Artour 'Arteezy' Babaev’s Alchemist in fight after fight. 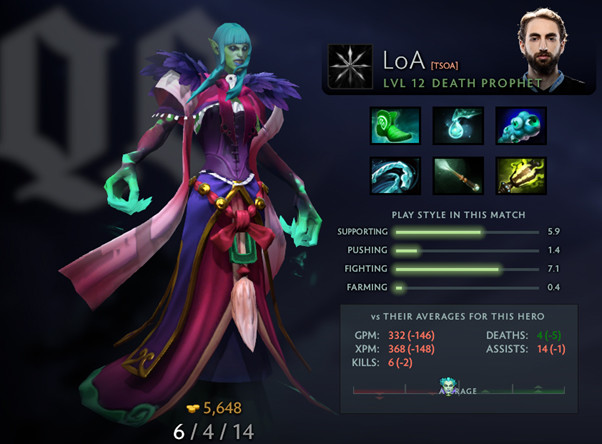 While this hero was also played to victories by the two players we’ve already examined, Fly and y`, we’re going to be looking at a game where it was played by Avery 'SVG' Silverman for Quincy Crew. Death Prophet has been having a major moment in the metagame, representing an extremely versatile first-pickable hero that can be played in many different positions. This event saw the rise of the ranged damage-over-time Offlaners, where Death Prophet and Viper found huge success. Because Death Prophet was so popular at the Major, she eventually found herself being played as a Hard Support in some games, so her team could secure the perfect last-pick for her Middle lane hero.

SVG went for a relatively standard 2-1-2 build for the hero, making use of that value point in Silence to prevent the enemy team’s Pheonix from diving away during early game ganks. Because the hero is a position 5 and isn’t responsible for outputting damage, SVG prioritized putting more points into Silence so he could continue being a nightmare for opposing casters. There were many times an opponent would get caught by one of his teammate’s Eul’s Scepters, lining them up perfectly to be silenced and brought down without any interference.

As the game progressed into the Midgame, SVG’s team was leading on kills and looking to secure additional objectives. He was able to use Exorcism extremely effectively to add major damage to his team’s Roshan taking potential, helping them get the Aegis much faster than if they’d had chosen any other position 5 hero. SVG compounds this ability with his item build, purchasing Medallion of Courage to ensure their physical damage is more than enough. With the Aegis secured for his carry and the lead firmly in their grasp, Death Prophet shows how good she is at snowballing a lead into destroying meaningful buildings without putting herself in danger.

I’m always looking for ways to spice up the Hard Support role in Dota, to show people that you can have a significant impact on the role without being forced to play the Crystal Maidens of the world. (Not that there’s anything wrong with our favourite conventional supports!).