How to play your first game of Dota 2 as Davion, the Dragon Knight 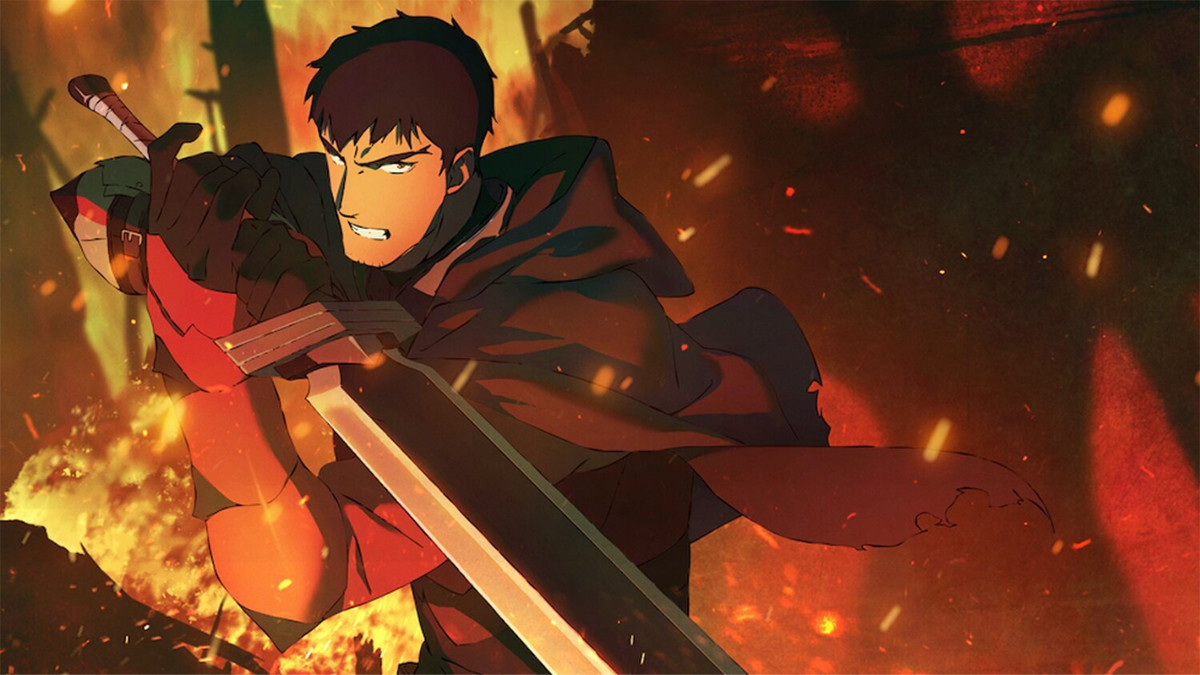 posted by Liightsdota,
Dota: Dragon’s Blood has finally arrived on Netflix, bringing with it a whole new generation of players interested in our favourite game. If you’re one of those new players, you’ve come to the right place! Today we’re going to examine everything you need to know about Davion, the Dragon Knight in order to play your first game of Dota 2.
The creators of Dragon’s Blood were incredibly shrewd in their choice to make Dragon Knight the protagonist of the show. In the game of Dota 2, Dragon Knight is one of the most straightforward, beginner-friendly characters, meaning anybody can go into their first Dota game and successfully play as Davion themselves.

Breathe Fire deals damage to all enemies in front of Davion

Breathe Fire is Dragon Knight’s bread and butter damage skill, which should always be your first priority to level up. It’s good to use this skill during the laning phase in moments when you’re able to secure a last hit as well as damaging opposing heroes in the same cast. Because this spell is Dragon Knight’s biggest way to deal damage immediately, it is good to get it off as early in a fight as possible, so it can come back available for subsequent casts later in the engagement.

Dragon Tail stuns opponents in place, allowing you to hit them

Dragon Tail is perhaps the most reliable stun in the game, with a quick cast time and long duration. This means that Dragon Knight and his friends will have plenty of time to beat up on their target. However, the ability does come with one downside. When Dragon Knight isn’t in his Elder Dragon Form, the cast range is extremely short, requiring your hero to be right next to an opponent to successfully cast. To stun consistently and aggress on opponents without them running away, most Dragon Knight players purchase Blink Dagger as their first expensive item, allowing them to jump a short distance on top of unsuspecting enemies.

While this skill may not be the most interesting, it is deceptively powerful, making Dragon Knight’s laning stage and early game a breeze. Dragon Blood drastically increases Davion’s health regeneration and armour, meaning that Dragon Knight is virtually impossible to harass out of a lane with autoattacks. Sometimes in lanes where they’re experiencing a lot of harassment, players will take points in this skill over Breathe Fire, sacrificing some damage potential to survive the laning phase without dying. By the lategame, this ability allows Dragon Knight to play up in the front of massive skirmishes, absorbing damage from many enemies at once.

Dragon Knight unleashes his full power with his ultimate. He transforms into a giant Elder Dragon, increasing the cast range of Dragon Tail while also gaining a ranged auto-attack that deals damage over time. What’s not to love about playing as a hugely powerful dragon, who also grows in size with higher levels of the skill? Whenever it’s available, this ability should be activated right before starting a fight or pushing a tower. Your hero is significantly more powerful when in Dragon Form, but when your ultimate isn’t available, you’ll have to play more cautiously and mostly avoid fights.

When starting fights on opponents in Dota, it’s usually best to target a squishy enemy support and quickly burst them down, giving your team a 4v5 advantage for the remainder of the engagement. If you’re able to land a Dragon Tail stun on any opponent when you have teammates with you, it should be enough for a kill in most cases. This makes Dragon Knight one of the best heroes in the game to begin fights for your team, and that often will end up as your job when playing the hero. Additionally, because the hero becomes so hard to kill as the game progresses, it’s important to play him at the front of fights. By beginning fights on opponents and then positioning yourself between the enemy and your team, you’re able to effectively control which heroes are in danger at any time. 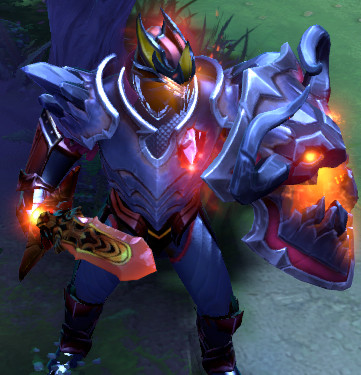 While Dragon Knight has traditionally been a Mid lane hero, for your first few games it’s best to play him in one of the sidelanes, preferably with a friend in your lane to be your support.

During the early game, Dragon Knight’s greatest priority is securing last hits on enemy creeps to accumulate gold, also known as farming. This gold allows you to purchase items that make Davion stronger. While it may be tempting to immediately go for that big shiny damage item, starting with some smaller items will allow you to continue your early game strength. This actually gets you to those late-game items sooner, because you’re more powerful while farming for them, and less likely to die while saving up for an expensive component. The recently updated new player experience has heavily streamlined the item buying process for beginners, allowing you to focus your attention on gameplay rather than shopping.

If you or your lane partner are getting attacked by your opponents, using your Dragon Tail stun is frequently enough to buy space for you to retreat to safety. The nature of Dragon Knight’s skills also means he offers solid kill potential on enemy heroes when paired with an aggressive partner. However, he is totally content peacefully farming creeps and healing up any damage thanks to his Dragon Blood passive. 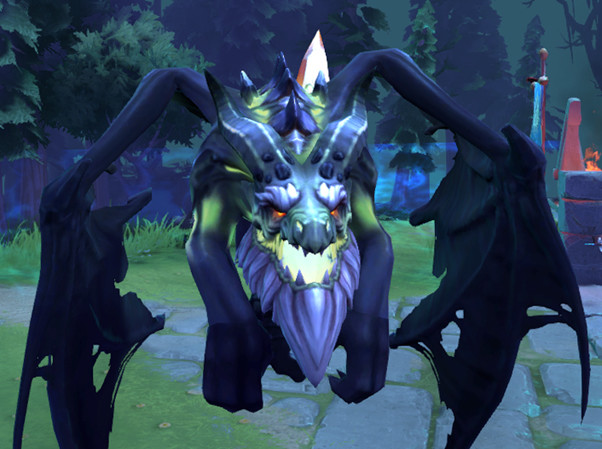 Elder Dragon Form adds corrosive damage to all your normal attacks, which crucially is one of the rare few abilities in Dota that affects structures. Because of this extra damage against buildings, Dragon Knight should look to group up with his team whenever the ultimate is ready to be cast. By having teammates around you when damaging the tower, you force the opponents to bring additional heroes to mount a successful defence. This frequently leads to blunders where they don’t bring enough players, or you just getting a tower completely undefended, both of which are massive wins for Dragon Knight’s team. Usually, your first priority should be to destroy the tower in the lane where you’ve been playing since the start of the game, followed by rotating to destroy the Middle tower with your next ultimate usage. Killing these two towers completely opens up the whole enemy side of the map, allowing your team to move into enemy territory, and start stealing farm that should be going to them.

Playing in front of teammates during lategame and dealing impactful damage

By the time you reach lategame, Dragon Knight will have augmented his already impressive inherent bulk with items that also make him harder to kill. Because Dragon Knight has so much more health and armour than the usual hero, your job is to play at the front of the fight and act as a big damage sponge for enemy spells and attacks. This allows your weaker teammates to play from the relative safety behind you because opponents are forced to go past your massive Draconic self in order to reach them. Of course, if you send yourself too far into 5 opponents, they’re still able to kill even the mightiest dragon. The real art of Dota is learning to walk the fine line between catching your enemies with surprising aggression and jumping into certain death. And don’t be discouraged if you end up jumping too far into the action, that’s the only way you’ll learn your hero’s boundaries, and even those of us who have been playing for years still fall victim to this at least once a game.

I’m thrilled that Valve have released such fantastic supplementary content for the game I’ve loved for many years. Dota: Dragon’s Blood will bring in a wave of new players who are able to immerse themselves in Dota 2 with a completely different perspective than those of us who started by playing the game. I’m excited about all the adventures you have ahead of you, and playing Dragon Knight is an ideal place to start.

If you're ready to jump into the game with a friend on your side, why not pick the Dragon Knight-Mirana pairing? The Princess of the Moon can greatly support you in your first match. Check out our Mirana guide below.