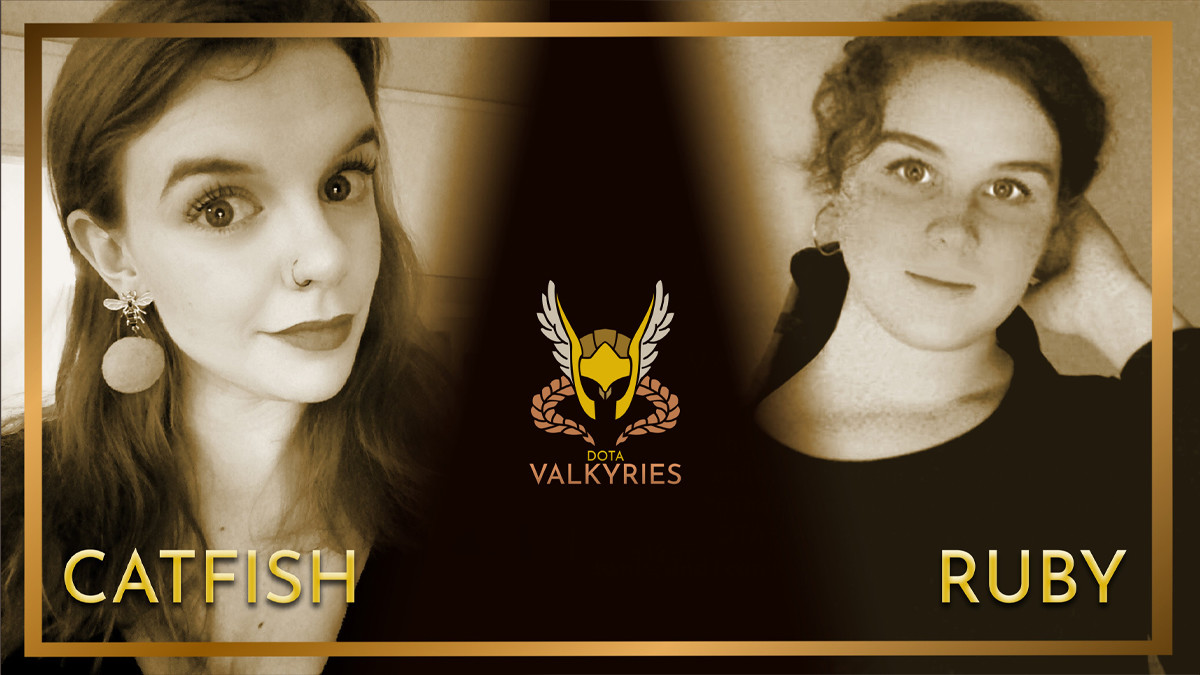 posted by NanaKrustofski,
The new organisation Dota Valkyries supports women in Dota 2 on a casual and pro level. We talk with the two founders Emma and Ruby about its formation, their goals and how they are going to tackle their ambitious goals. joinDOTA: Please briefly talk me through Dota Valkyries: What is your project all about?

Emma: Dota Valkyries is an organisation we formed with a couple of goals in mind. We don't want to create an all-female team or all-female space. We knew straight away that we want to bring women into already established teams that are competing in the highest ranks of Dota 2, such as at The International. At the same time, we also were aware that casual players deserve more recognition and help. This is why we came up with a two-fold plan to help streamers or casual players as well as those who want to go pro.

jD: Apart from you not wanting to build a female league, were there any more misconceptions after your launch?

Ruby: I've read the name Team Siren so many times (laughs). A lot of people saw the term org and thought we were a traditional team. We are just an organisation but not in the way Alliance or Secret are.

jD: What are your goals with Dota Valkyries and how do you want to approach them?

Ruby: We want to look at individual problems and address those. One part of our work is to reach out to all major tournament organisers to also include women in their events. For example, by creating a division where women can more easily compete in. Even if it has less coverage, the competitive experience they would get from consistent tournaments throughout the year is really valuable. To reach this, we are already in touch with some major tournament organisers to make it happen.

The long-term goal is of course to get a woman into a mixed-team and onto the TI stage because of her skill-level. Eliminate the barriers and the difficulties with toxicity. It would also be incredible to get more people join the game due to our efforts.


We want to show the world what these players can do

jD: Is your work mainly in the background or will you also have public activities like producing content?

Emma: A lot of it will be in the background. The majority of our content on social media and our website is going be centred around those players and streamers we have on board. We want to show the world what they can do. We don't only want to be a platform to help the players, but also to advertise other women in the scene. Perhaps, this can even inspire other women to join the game.

We are looking at the 360-diversity of being an esports player. Whether it is helping with how to present and market yourself online, how to make yourself stand out against other players or how to go to those events. Playing at your first tournament is always daunting.

jD: How did you come up with the idea to create Valkyries?

Ruby: I was having a conversation with Sheepsticked about why we not know many high-MMR women. And then we theorised what would we have to do to bring them in important tournaments. This eventually turned into the seed of an idea for an organisation that could maybe tackle a fraction of those things we talked about.

jD: What do you think, why are there fewer women in high MMR in general?

Ruby: Everyone knows a few women with high MMR. There are female players at a high level, but many of them also prefer to stay out of the spotlight and just play. We hope that with our project, we can encourage some women who maybe kept their identity hidden to step into the spotlight. So eventually, they can feel more comfortable and proud of being a woman at a higher level, instead of hiding it to avoid inconveniences.

jD: In VALORANT, several organisations recently revealed all-female rosters, and there are also mixed high-level teams. In your opinion, what does Riot Games do differently?

Emma: Part of it has to do with Riot, but also that VALORANT is a newer game. More and more women are becoming a part of the gaming-scene, and also becoming known there. Video games were often more marketed for boys in the past 20-30 years, which is where the idea of "who should play games" started. It is now starting to change, with other esports scenes having famous women. But maybe having one idol to look up to per game is not enough.

I DID IT WITH 50 MINUTES TO SPARE TILL THE NEW YEAR THANK YOU SO MUCH EVERYONE WHO BELIEVED IN ME WAHHHH 7K MMR pic.twitter.com/pWaajTLSmF

Ruby: Dota is really extreme compared to most esports in terms of how hard it is to get into. So one barrier is how much time you're able to dedicate into the game. There was an interview with Jerax last year where he talked about how early in your life you need to start playing and how many years of experience you need to become a pro. Often, guys are allowed to spend more times playing video games when they grow up. The second barrier is to stay, which ties in with toxicity. It is a really toxic game and brings out the best and the worst in people. Targeted harassment against women can lead to them not wanting to speak up or be visible.

Emma: There is a difference between general toxicity and targeted harassment. I don't mind being told I'm bad at Dota, I already know that. But if you then turn it and say it is because I'm a woman and shouldn't be in your game because of that, there's a line.

jD: What will be your next step with Valkyries?

Emma: We are now analysing the resources we have, as we got a lot of amazing support with our launch and people offer to help. So, we need to find top-tier women in Dota in each region, offer them coaching, working towards the parameters of what gets you hired to a tier-2 or 1 Dota team and investigate in how to market these players. For the side of more casual players, it's important to have other places like Desoladies and other services that run tournaments and create spaces for women to play.