Feeling good man: Why Witch Doctor is currently the best he’s ever been 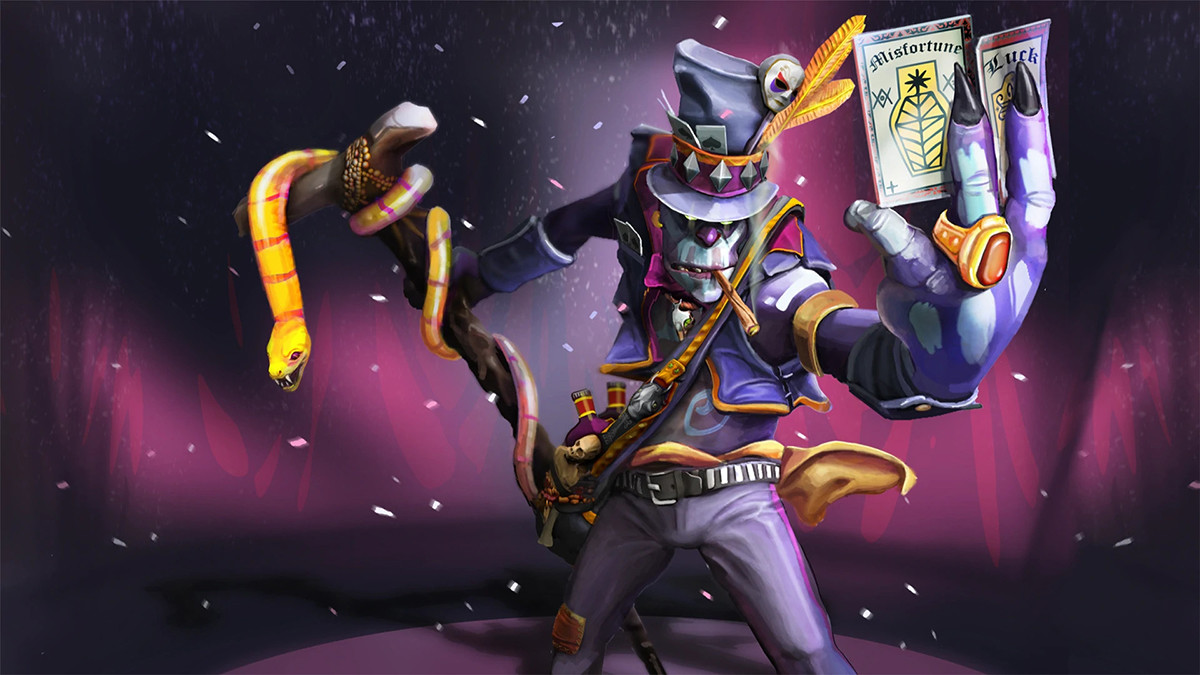 posted by Liightsdota,
We’ve recently seen a sharp rise in the appearances of Witch Doctor in professional Dota, mostly in the North American DPC. Today we’re going to take a look into why Witch Doctor has been suddenly seeing so much success, and how you can harness this potent physician to secure your own pub victories.

Witch Doctor provides unparalleled aggressive potential which has made him invaluable in the DPC, particularly in NA

While Witch Doctor has always been a solid option, for the last few years he’s been overshadowed by other position 5 heroes who have been more overpowered in their favoured patches. Witch Doctor has been patiently biding his time as a B Tier support, waiting for the day when Icefrog’s slow incremental buffs piled up enough to bring this hero into the spotlight as a massive S Tier threat. While researching this article, I went back and noticed: This hero has received exclusively buffs in every patch which he’s received a change since the release of talents in patch 7.00 back in 2016. I’m happy to announce that Witch Doctor’s day has finally arrived and this hero is absolutely incredible in any Dota lineup today.

The final buff which pushed the hero into the overpowered category, and drew major attention to him, was the introduction of his Voodoo Switcheroo — Aghanim’s Shard. This new ability lets Witch Doctor transform into a slightly less powerful Death Ward for 2 seconds. This ability is so incredible not for the aggressive damage potential, but because it solves one of Witch Doctor’s major weaknesses in the past, which was his fragility and susceptibility to getting fully burst down before he could receive enough healing over time from Voodoo Restoration. With the addition of this new ability, Witch Doctor has a fantastic defensive option that forces opponents to reset onto a new target rather than finishing the kill onto Witch Doctor.

While Witch Doctor may not strike everybody immediately as a character with strong political inclinations, our purple friend feels good (man) while playing with a King by his side. Teams across the DPC have been finding the most success when Witch Doctor is laning with one of these two aggressive monarchs: Wraith King and Monkey King. These two pairings work best because of their ability to start the initiation on their laning opponents with their reliable stuns, which means Witch Doctor can have the luxury of being the second hero to stun. This opens up greater opportunities for a kill attempt, which may not be possible in lanes where Witch Doctor needs to land a good Paralyzing Cask in order to begin aggressing on his lane opponents.

Once Witch Doctor is paired with an aggressive carry, the next step is ensuring that the carry hero gets off to a good start. Taking your first skill point in Paralyzing Cask is usually the best option to help your carry secure ranged creeps for the first few levels. Don’t be baited into an all-in engagement during the first two levels, instead just take favourable poke trades and use Cask defensively if your opponents aggress. However, once reaching level 3, Witch Doctor secures two points in Maledict and becomes a massive kill threat to virtually any Offlane opponents. Try to ensure that you hit one of your lane’s two stuns onto your target after they’ve been hit by Maledict. If it doesn’t secure a kill outright, you’ll at least ensure your opponents have to ferry out extensive regen, or play the lane much more defensively.

In lanes where your carry doesn’t have a stun of their own, it's the Witch Doctor’s job to land a Cask on opposing heroes to briefly stun them in order to successfully land Maledict. While this can sometimes be difficult against defensively positioned opponents, there is a very common situation you can look out for which will set up a perfect Cask. When your creepwave is clearly pushing towards your opponent’s tower, it will kill through all the opposing melee creeps, before finally moving onto the ranged creep before marching ahead. Many greedy opponents don’t like conceding all the experience of a free ranged creep, so they will hang around trying to get the deny, or merely wait for a second too long before backing up. This situation ensures the only Cask targets are the opposing hero and a single creep, perfectly securing multiple bounces onto the same initiation target.

Many Witch Doctors in public matches build Arcane Boots on the hero, to give him mana in order to sustain Voodoo Restoration. Most pros, however, prefer Tranquil Boots, which enable the Witch Doctor to get more involved early thanks to the bonus movement speed and healing, as well as the 1400 gold price tag for Arcane Boots being unrealistic to acquire in games where the lane didn’t go perfectly. Pro players solve the hero’s mana issues by purchasing lots of clarities throughout the game and being selective about when they cast spells. Glimmer Cape is a fantastic main item for Witch Doctor in most games because it’s invisibility enables him to channel a longer duration Death Ward before he gets interrupted. It’s also important to note here that you can actually cast Glimmer Cape after you begin to channel your ultimate without interrupting the channel.

In this clip, despite suffering a difficult early game and having the lowest net worth in the game, the crucial damage provided by Maledict allowed Kim 'DuBu' Duyoung to secure this kill on Quincy Crew’s #1 networth Void Spirit, who was on a large killing spree.

If you lane this hero with the correct aggressive partners, and continue to play the game aggressively looking for pickoffs afterwards, you’ll have enormous impact from the Hard Support position. Witch Doctor is currently in the best place he’s been in years and I wholeheartedly recommend first picking him in any current pub game.