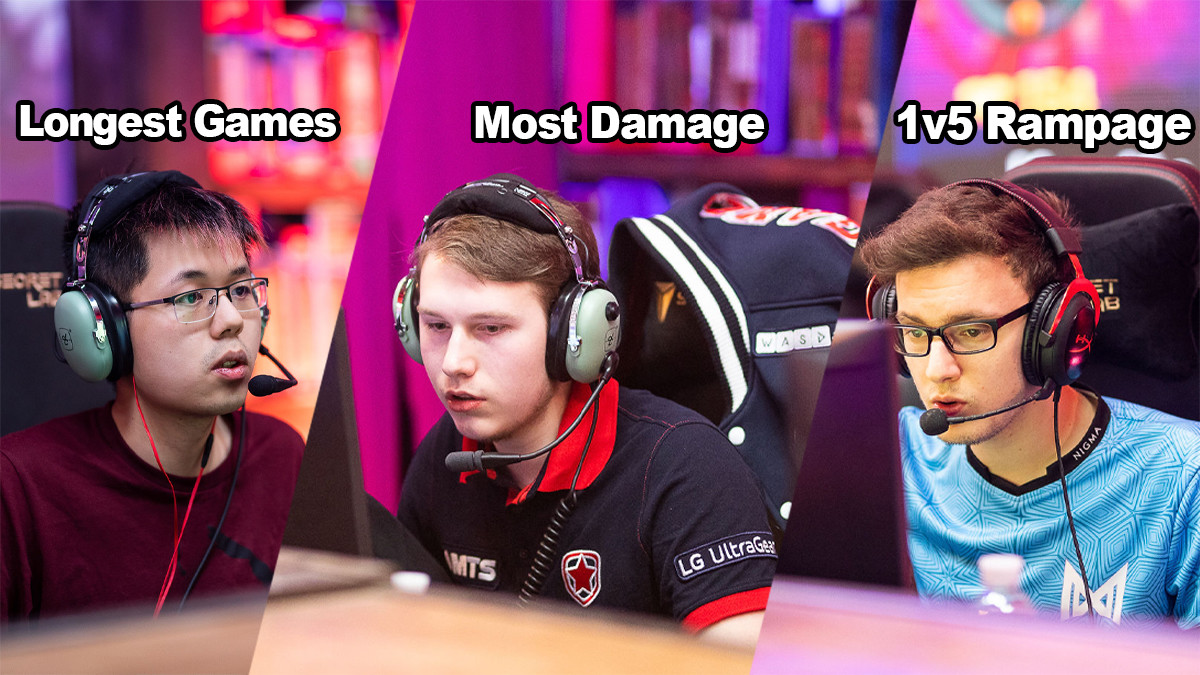 posted by NanaKrustofski,
With 50,000 professional matches in the books, there have been many milestones and records. Let's take a look at some statistics, the fastest GG in the world, the highest net worth lead and the outstanding performance so far only Miracle achieved.
ADVERTISING:
A new milestone got breached: there are now 50,000 professional Dota 2 matches in the history of our beloved MOBA. Dota statsman Ben 'Noxville' Steenhuisen posted a collection of facts and numbers for these past 50k games on Twitter. So let's add a point into Time Walk and take a closer look at those records and stats.

Earlier today, Aster took on IG.Vitality in what was the 50,000th professional game played of Dota 2.

Let's look back at some numbers over that time ...

A lot of talents in the deep sea of Dota 2

Noxville starts his recap with the overall number of players: there have been 13414 unique players that competed for a total of 3269 different teams. Among all these pros, only 864 have over 100+ games on their record (for 179 unique teams).

We all know that roster-shuffles seem to happen at any given time, but some of the pros are really loyal to their organisation. 17 players completed over 1000+ games under the banner of one team. Between these 17 loyal warriors, 3 were signed by Alliance and 3 by Evil Geniuses.

Now let's take a look at some average stats:

GG after 6 minutes – or after 3 hours

Noxville further calculated that the average games last 36m26s. The shortest match of all time, however, was done after only 6m37. The game took place between EHOME and Moscow Five* in the BeyondTheSummit World Tour in 2012.

The Russian players from Moscow Five struggled hard in the group stage and lost every single game. As they were basically already eliminated anyways when going into the second match against EHOME, the motivation seemed to have disappeared. M5 lost all their lanes and kept dying. After 5:50 minutes, a 3k gold disadvantage and a 11-3 kill score, they called GG. It took a few more seconds until at 6:37, when the nightmare was finally over.

What's worse to play: a game you're so frustrated with you give up after a few minutes or a never-ending challenge? The longest official match lasted for 3h20m34s. The odyssey took place between Cloud9 and ScaryFaceZZZ* in the qualifiers for StarLadder Season 12.

With a kill score of 109:66, Scaryfacez were finally able to close the game, accompanied by an epic sound track and the screams of nearly hoarse ODPixel. Despite losing, Cloud9 had a true expert on endless matches on their side. According to Noxville, Jacky 'EternaLEnVy' Mao takes home the trophy as player with the most 60+ minute games with a total of 114.


True Assassins among the pros

Among all those 50,000 games, the teams scored 24 kills on each side on average, as well as 50 assists across all members. Noxville points out cases where one player alone shakes up the statistics with +30 kills on his score board.

The most famous example is Sumail 'SumaiL' Syed Hassan in Evil Geniuses legendary series against OG at The International 2018.

Not only did this encounter result into the iconic frozen face from Johan 'BigDaddyN0tail' Sundstein when shaking hands with former team-mate Tal 'Fly' Aizik, it was also an example that giving your everything not always results into success. SumaiL played out of his mind, finishing with a 31/4/8 Tiny and still, EG lost the series and got kicked into the Lower Bracket.

Despite SumaiL's impressive killing spree, 31 is nowhere near the record of most kills in a competitive match. Ilya 'Illidan Stormrage' Pivtsaev takes home that crown with 44 kills as Anti-Mage against Cloud9 in the Starladder StarSeries Season 11 Qualifiers.

However, all this bloodlust is not enough to also add up to the most hero damage. This record got achieved by Danil 'gpk' Skutin as he dealt a mind-blowing 203,863 damage as Zeus against Team Spirit in the qualifiers for DreamLeague Season 13: The Leipzig Major. As a comparison, the enemy Slark only brought 67k to the table. gpk ended the match with a 21/3/11 score.

Sergey 'God' Bragin established another milestone when it comes to killing: Although his targets were not the enemy heroes, but the creeps instead, he holds the record for most last hits in a game with a score of 2417 in a match against Team Empire in TI7 qualifiers. Despite the high net worth lead, his team Vega Squadron was not able to close the match and lost the series in the Grand Finals of the qualifiers.

While God and his team-mate Ilya 'AlohaDance' Korobkin both accumulated over 2k last hits that match, it is another team to snatch the record for the highest networth advantage. Chinese superstar squad Elephant established a lead of over 154,000 in their match against EHOME in the China Dota2 Pro Cup Season 2.


Miracle lives up to his name

Noxville states that there have been 4,450,673 teamfights since Source 2 came out. Among all these brawls, it happened only once that a player successfully killed all enemies while fighting 1v5 the entire time.

It takes an extraordinarily skilled player to dominate the opposing team this hard, and of course it is Amer 'Miracle-' Al-Barkawi.

The star player managed this record in a match against Forward Gaming at the ESL One Birmingham 2019. Miracle casually walked into the Radiant jungle with his Outworld Destroyer, a Double Damage Rune fueling him. The NA team fell to him one after another and then called GG. The game ended with a 13/1/5 kill score and twice as much damage than the other midlaner for Miracle.

There have been other memorable solo rampages in the history of competitive Dota 2, such as Artour 'Arteezy' Babaev's famous Lifestealer play against Vici Gaming at The International 2019. However, those team fight did not start as a 1v5 as other teammembers were involved in the beginning.