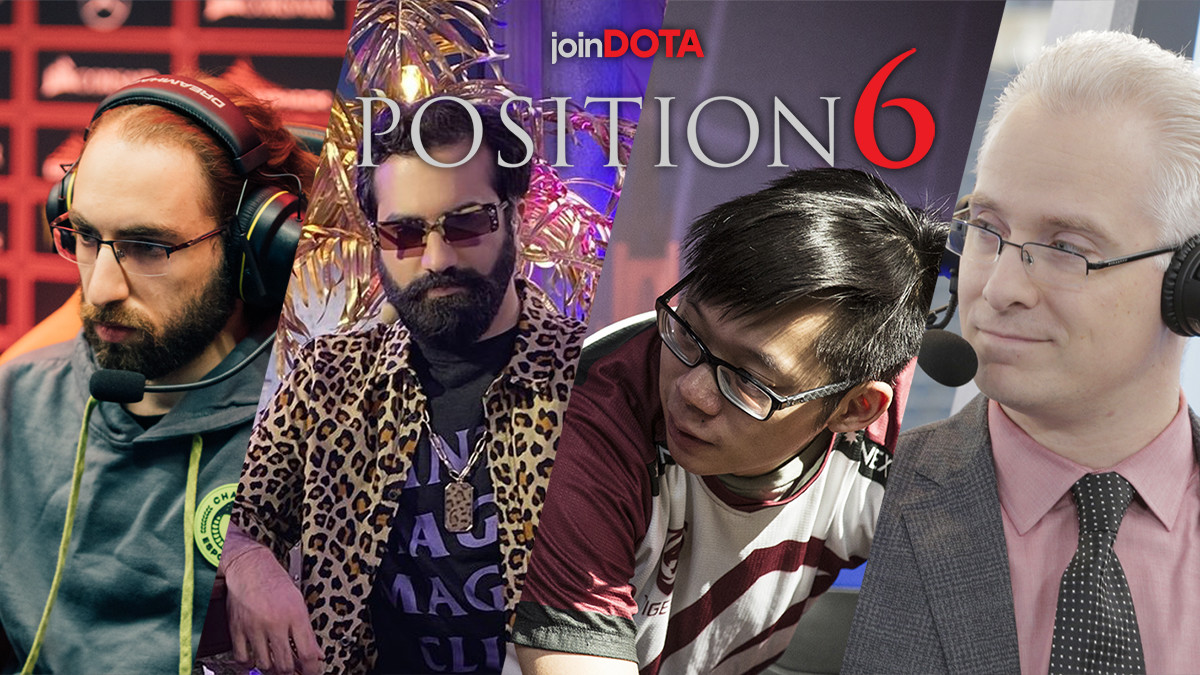 posted by NanaKrustofski,
The past four guests in our Position 6 Podcast all have different career paths and therefore a whole lot of topics to talk about. Check out the highlights of the most recent episodes.
ADVERTISING:
While we are still working on some fresh episodes of our Position 6 Podcast, we prepared an overview of some of the most recent episodes to bridge the time. From analysts talking about the value stats can give to Dota, to a deep dive into the NA economics with a pro player over to the problems with coaches: the past four episodes offered a variety of topics. So, grab your headphones and check out the latest Position 6 podcasts.

Last week's guest was Avery 'SVG' Silverman, one of the rising stars of Quincy Crew who are currently dominating North America. The support player discussed the current situation in the NA region, different aspects of running a team and the pros and cons of being a Dota player during the pandemic.

As a former coach of Evil Geniuses, SVG also talks about this role in general. To him, there is a risk that a coach loses their value after 1-2 years on a team since they are unable to make an impact and bring new, fresh ideas. According to SVG, there are many coaches in the scene who are not actually productive as they don't improve the results.

Neal 'tsunami' Khandheria made his entry into the Dota scene as content creating community figure. He is known for his YouTube videos, as well as written content where he produced hero guides and tips, as seen on his homepage howdoiplay. Tsunami is also responsible for the hilarious yet confusing Deep Slacks Bot on Twitter. Over the past years, he has earned himself a name as caster and analyst for various events.

One of his most notable works as talent was as a commentator at The International 2019. He remembered being thrown out of his comfort zone and shares some insight into working with other talents. Despite his popularity and knowledge, tsunami distances himself from being too active on social media as he has no desire to share his perspective on matters.

MoonMeander: An unhealthy scene in NA

Another pro player from North America recently visited our podcast, but with a completely different focus of topics: David 'Moonmeander' Tan. In particular, the NA scene had issues with funding throughout the pandemic, as the shut-down of MoonMeander's former Dota team CR4ZY underlines.

The Canadian explains how the problems have snowballed due to a lack of high prize pool tournaments, orgs dropping teams, scrims stopping and sponsorships being absent. MoonMeander further says that the issues predate the pandemic but cannot be pinpointed to one reason. However, he states the attitude of pro players, lack of tournaments and the fact that Dota is organisation-unfriendly as possible reasons.

Alan 'Nahaz' Bester is well known in the scene for his work as analyst, be it on the panel in tournaments or with projects like datdota. On top of his career in Dota, he also teaches economics as a professor at Georgetown University. Keeping the balance between these two jobs can be quite challenging, as he explained on Position 6.

Nahaz also explains his approach when using statistics to give a new insight into the game, as well as looking at what sets the top teams apart from the rest. As he's been part of the scene for several years, the statsman also has some anecdotes to share. For example, Ben 'Merlini' Wu was able to take a nap at tournaments and still figure out the entire course of the match just by looking at the statistics at the end.

Is there any player or talent you would like to hear on Position 6?