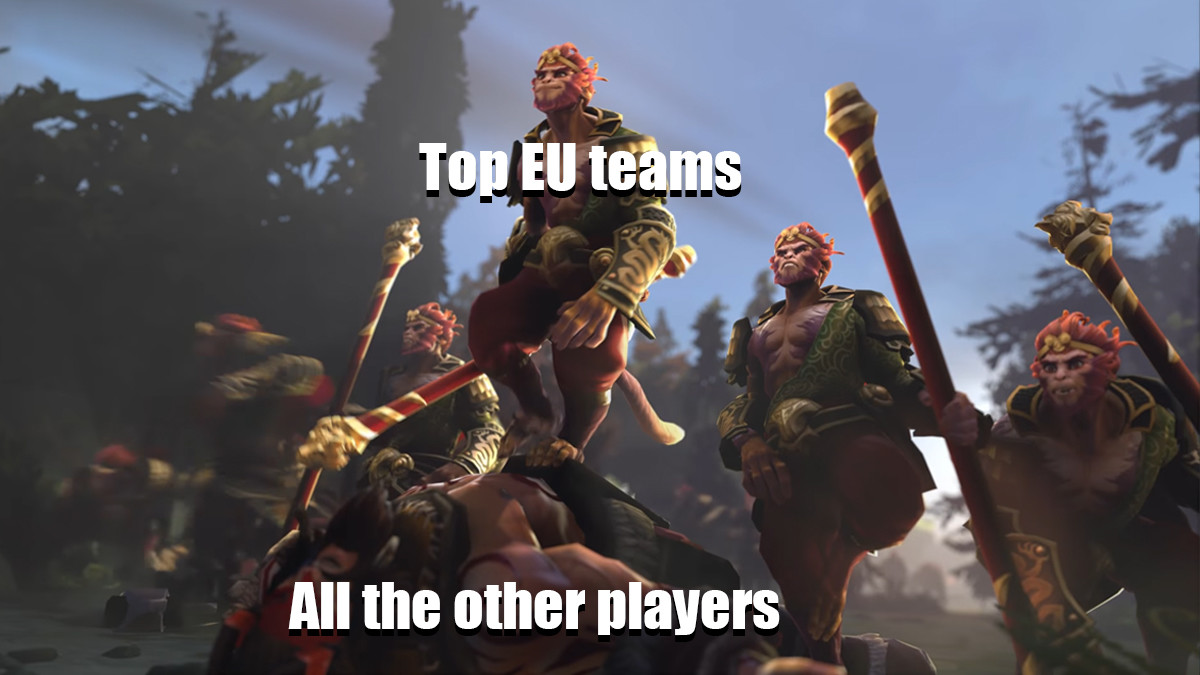 posted by NanaKrustofski,
Dota pro players struggle with their financial income, Reality Rift has shut down and there is no redemption in sight. The DPC is still on hold with no information and because the pandemic affects some teams more than others, the scene is now talking about the persistent problems faced by lower tier squads.
ADVERTISING:
There are always discussions about Valve's treatment of Dota's tier 2 and 3 scene, and the general attitude of the community towards lower tier matches. Currently, the debate is in full swing again after several incidents.

Theeban '1437' Siva shared on Twitter this Monday, that he reached out to several Dota pros and noted that most of them struggle to find a sustainable income. He goes on to explain that since there are no official statements from Valve on how the DPC is going to continue, organisations are less likely to invest in Dota.

The competitive Dota scene has always been extremely top-heavy, with smaller teams and players having trouble finding a stable income. With The International 2020 being postponed indefinitely, the current years seem to hit even harder.

Been reaching out and talking to some dota pros and it's heartbreaking to hear their current struggles and how things are working backwards. Apart from the top EU teams and less than a hand full of global teams, players can't find a sustainable income

That being said, we have faced this issue since the start but it's a bit different this time. There is no TI to bring us all back together and give hope. Times are tougher and this is when we need the big guy to step in and show us what we as the people have adored and supported

Reality Rift had to release their Dota roster

The recent shutdown of Reality Rift's Dota team is one example of how players and organisations who are not part of the elite within their region struggle financially. RR's CEO Ilya Vlasov explained in a TwitLonger on Tuesday why they had to depart from the Dota scene. He cites three main reasons:

Make sure to check out the entire TwitLonger to get more information on the topic.

Why we shut down Reality Rift Dota2

The problems of supporting the tier 2 scene

Over the past days, another debate sparked up on social media regarding the tier 2 scene. Ninjas in Pyjamas's team manager Allen Cook called for a more respectful casting of lower tier matches. Whereas some fans agreed with this sentiment, others had the opinion that a more comedic approach to the cast could help the matches.

Usually, lower tier games do not get nearly as many viewers as the Team Secret versus OG matches. There is a long, ongoing discussion about how to support tier 2 and 3 players and what tournament organisers or Valve could do to get them more exposure.

I respect the individual work of both @SirActionSlacks and @DotACapitalist - but to start a BO3 with such a disrespectful undertone? When people are calling for assistance for tier 2 dota, and we treat it by literally calling players "weak" and bad versions of "x" player its bad

While many fans argue that the scene will never be interesting for them to watch since it represents comparably "bad" and "unskilled" Dota, Skim Gaming contradicts this with another theory: it is not the gameplay that lacks spice, as there are many top 10-30 leaderboard players who definitely have mechanical skills to show.

The issue would be that tier 2 and 3 teams lack interesting storylines and personalities that might trigger more people to watch. He pointed out that Jacky 'EternaLEnVy' Mao always received a lot of exposure, even when his teams did not perform at a top level.

Skim also added the theory that most fans wouldn't even recognise the difference between tier 1 and 2 players when only watching the gameplay.

I have nothing to back this claim up with, but I think if you erased all team and player names, lots of dota fans would hardly recognize the difference between tier 1/2 dota