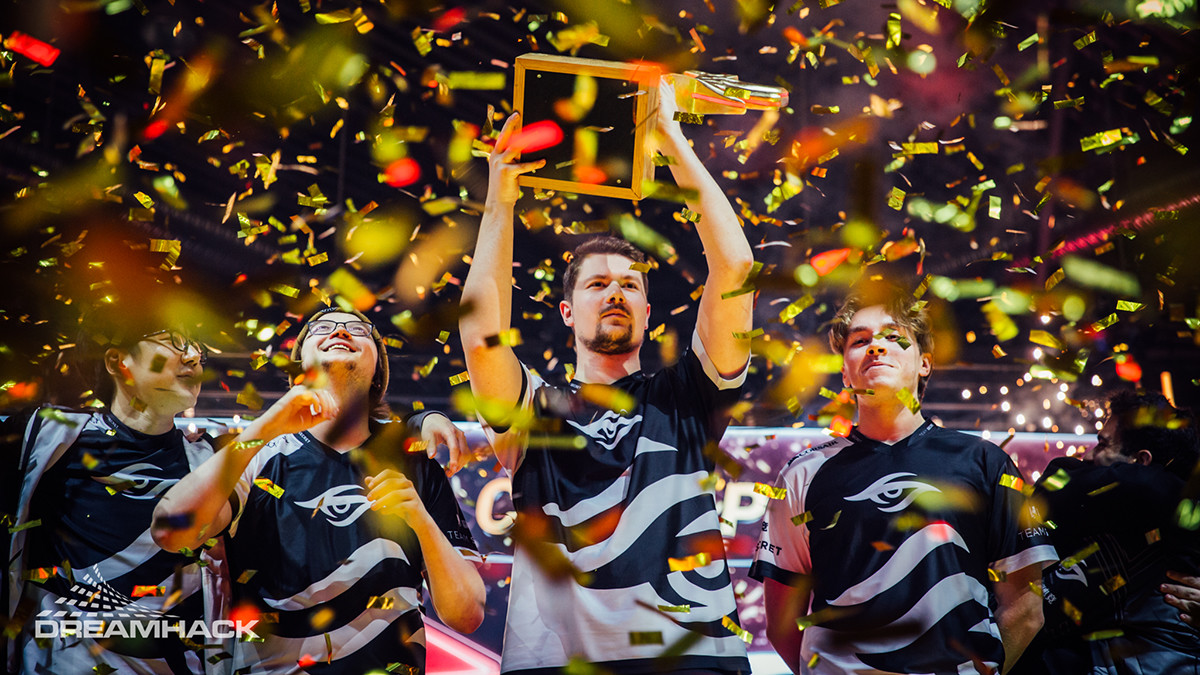 posted by NanaKrustofski,
Five 3-0 Grand Finals victories in a row. Team Secret claim the trophy at BLAST Bounty Hunt with a convincing series against OG.
ADVERTISING:
OG and Secret already met earlier in the tournament in the Upper Bracket Finals. OG could take it to three games, but lost 2-1 and had to face Nigma in the Lower Bracket next. A dominating 2-0 victory brought back hopes for OG fans, but the team was not able to overcome Secret in the revenge match in the Grand Finals. Clement 'Puppey' Ivanov and his team add another crushing 3-0 triumph to their success story.

The first clear victory for Secret who kept the networth lead throughout the entire game, peaking at 23k after 29 minutes. Clement 'Puppey' Ivanov delivered an outstanding performance on his 8/1/20 Nature's Prophet. Despite being position five, he was even able to overcome Sumail 'SumaiL' Syed Hassan in farm at some point.

OG went for a surprising Spirit Breaker pick for Yeik Nai 'MidOne' Zheng. The hero hadn't been played in the tournament up until this point, but MidOne was not able to charge towards victory. Most of his initiations got interrupted by Ludwig 'zai' Wåhlberg's Flamebreak on Batrider.

After Secret's dominant victory in the first game, they further speeded up the pace and crushed OG in only 22 minutes in the second match, resulting in a 26-7 kill score.

Lasse 'Matumbaman' Urpalainen added another successful Luna game to his records, as he finished 8/2/11. Michał 'Nisha' Jankowski once again displayed his large hero pool and convinced with a niche Visage pick, finishing 5/0/13.

For game three, all of Secret's members would deserve an MVP medal. After 33 minutes, the powerhouse led with a 36k networth advantage and 47-18 kills, claiming their third and final victory.

Secret went for a Nisha Storm Spirit. The hero also made his first appearance in the tournament, but unlike OG's Spirit Breaker strategy, the pick worked out: Nisha finished with a 12/4/20 score line. At the same time, MATUMBAMAN's Ursa boasted nearly 22k networth, even Yazied 'YapzOr' Jaradat and Puppey were able to outfarm Topias 'Topson' Taavitsainen and all of Secret's players came to a nearly equally great KDA as Nisha.

Secret were able to outplay and outdraft OG in all three matches, crowning themselves BLAST Bounty Hunt champions.

Forget about Dota, we're playing cat and mouse in this 3rd game 😼🐭

Who can stop Team Secret?

Secret appear invincible at the moment. They always notice mistakes in their opponents' play and find a way to punish them. On top of that, they benefit from having five players who are not only individually extremely skilled, they also bring an incredibly broad hero pool to the table which allows them to adapt and outdraft even teams such as OG. Their hero line-up is always flexible as they can play most heroes on several positions, making it easy for them to respond to their opponents' picks.

By winning BLAST Bounty Hunt, the team won their fifth Grand Finals in a row by sweeping their opponents 3-0. Take a look at their most recent record:

But even though OG just got crushed in these Grand Finals, they seem to evolve into one of the strongest teams in the European scene again. As Johan 'BigDaddyN0tail' Sundstein explained in an interview with joinDOTA before BLAST Bounty Hunt started, the team is dealing with internal problems.

MidOne and Topson still struggle with internet issues. Also, Topson couldn't practice with his team-mates during the past months and seems to just warm up at the moment. On top of that, since OG had to use stand-ins for the past tournaments, BLAST was only the second event where the five of them competed together.

Nonetheless, OG made it to the Grand Finals. Secret were still continuing the joke Twitter beef the two organisations have had in the past days so if you want to be entertained with some "drama", take a look at Sebastien 'Ceb' Debs's and Secret's Twitter account.

Post-game interview you said? We've got it covered 🤡 pic.twitter.com/54P9Dm8wJW

What do you think: how can Secret be defeated in the next Grand Finals?