OG: A look back at the legendary roster 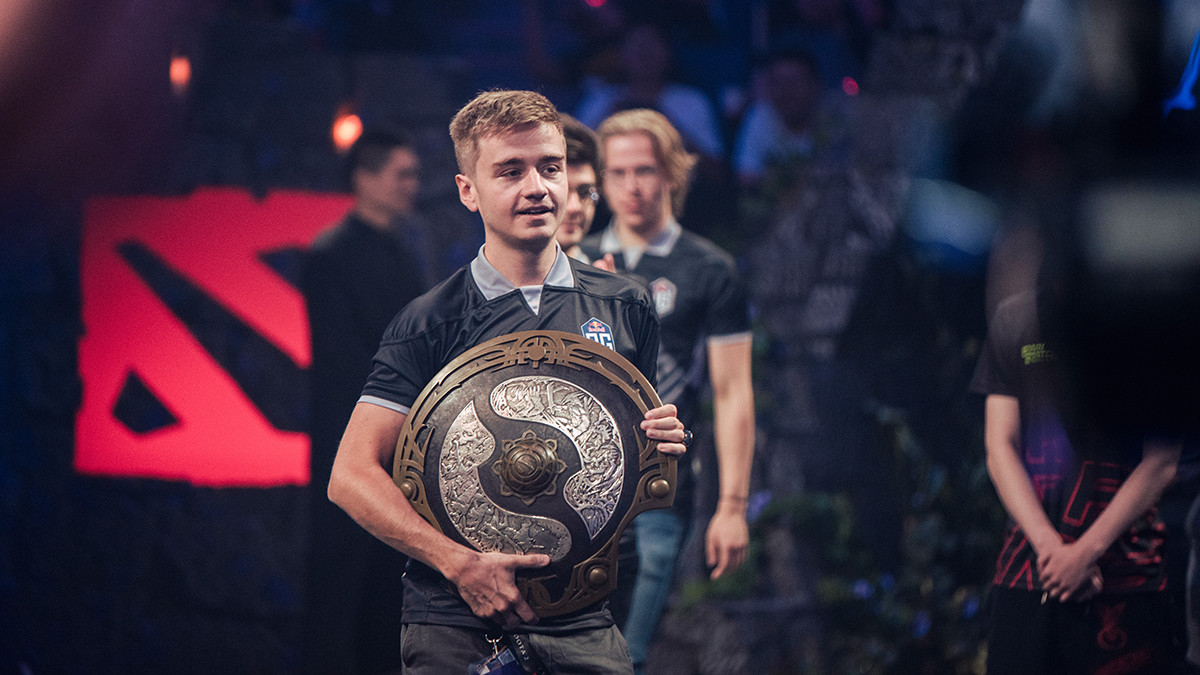 posted by NanaKrustofski,
Two-time world champions, Dota legends, the best team in the world – there are many terms to describe OG. But the team will make their next run to the Aegis with a different roster. Let's take a look at the iconic players who made OG the record breaking organisation they are today.
ADVERTISING:

The early days of OG

Shortly after, monkey Business was turned into OG. The meaning behind these two letters has been not revealed to this very day. A common theory is that OG is an abbreviation for "Original Gamers". Others include terms such as Orangutan Ganja, Opinionated Grandmas, and Optimism Greatness among others. But most likely, it does not stand for anything, since n0tail himself does not know the meaning.


The legendary roster slowly comes together

The original roster underwent some changes and stepped up to the The International 2017 with n0tail as carry, Anathan 'ana' Pham as midlaner who joined the squad in late 2016 together with support Jesse 'JerAx' Vainikka, Gustav 's4' Magnusson as offlaner and Fly as position 5.

After an eight place finish, ana left OG to compete on different teams. However, his absence should not last for too long. Fly left the team, so n0tail took over his position whereas Sebastien 'Ceb' Debs switched from coaching to playing actively – the perfect decision as it turned out later.


OG will never be successful with Topson?

In June 2018, ana returned to their roster, alongside with newcomer Topias 'Topson' Taavitsainen. Prior to OG, Topson was basically completely unknown in the competitive scene. He played for SFTe-sports* and 5 Anchors No Captain – rather unheard-of rosters that only participated in small tournaments and qualifiers. With his addition, the legendary OG roster was completed.

However, Topson's abilities didn't go unnoticed as OG decided to give him a chance. While the players trusted him, the community was not convinced about the newcomer at first as this Reddit comment shows. Little did the community know that this man will have a 100% win rate at The International soon. 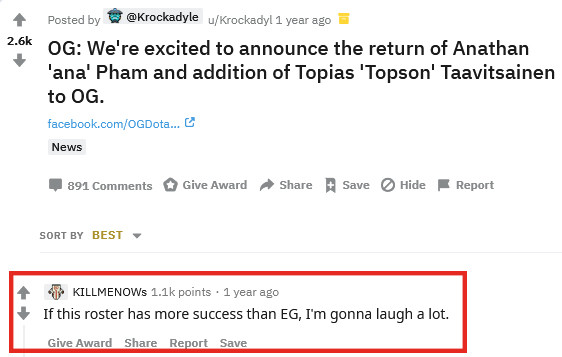 The International 2018: The Cinderella story

Topson quickly proved critics wrong. OG ploughed their way through the Open Qualifiers of The International 2018 as well as the Closed Qualifiers – and they did not stop their run on the Main Stage until they claimed the Aegis.

Of course, every single player displayed an outstanding performance. Especially Anathan 'ana' Pham's on his signature hero Ember Spirit was a key to their success. With a 15/7/16 score line, most damage and most farm, he secured the final match against PSG.LGD.

While they later went down in the history books of Dota by winning TI back-to-back, their victory in 2018 was already unique. Their final roster was completed only around 11 days before the Open Qualifiers took place, and yet the team managed not only to advance to the playoffs, but to also lift the Aegis in the end – and with that, they became the first team to win TI that started through the open qualifiers.

After winning TI, ana decided to take an extended break and was moved to OG's inactive roster. The team tried out playing with Per Anders 'Pajkatt' Olsson L. and Igor 'ILTW' Filatov as a loan, but the constellations did not seem to work out and OG struggled to achieve stellar results.

In March 2019, ana returned to the professional scene and came back as an active player. The period of struggles ended, OG managed to qualify for TI again and everything was ready for the next miracle.

Especially the final match showed OG's creativity. ana once again prevailed with his IO carry, a strategy no one ever used in professional Dota before. Topson went for a Diffusal Blade on Gyrocopter, which at first puzzled viewers and casters. But the build turned out to be the perfect weapon against their opponents Liquid, rendering their spells completely useless.

OG achieved what no other player or team ever accomplished: a second TI win. Not only did they manage to win the world championships twice, they did so back-to-back. This victory cemented their status as the best team in the world and they defied all allegations of their former TI title being a fluke.


It's all Monkey Business

OG have always counted as fan favourites due to their charismatic players. Beyond their unconventional playstyle, the team is known for their chaotic energy.

They stayed true to their Monkey Business roots, as Kuro S. 'KuroKy' Takhasomi stated during the finals of TI9. OG were charged with energy, constantly joking around, shouting, imitating monkeys as can be seen in the latest edition of True Sight.

Their jolly nature went so far, that Ninjas in Pyjamas pre-muted them at the Epicenter M: Europe Qualifier – to what they quickly responded with a flood of chat wheel responses.


The end of an era

Many people consider OG to be the best team of all time. Now, some of the legendary players pursue different paths. JerAx retires from the competitive scene, Ceb goes back to coaching and ana extends his break to the next season.

They leave behind a giant legacy that seems nearly impossible to exceed. The Dota scene cannot witness any more of their unconventional drafts, their team spirit or their record breaking TI runs. But on the other hand: now the stage is open for other teams to emerge to the top.


Fluff: Wait for it!

What was your favourite moment of OG?