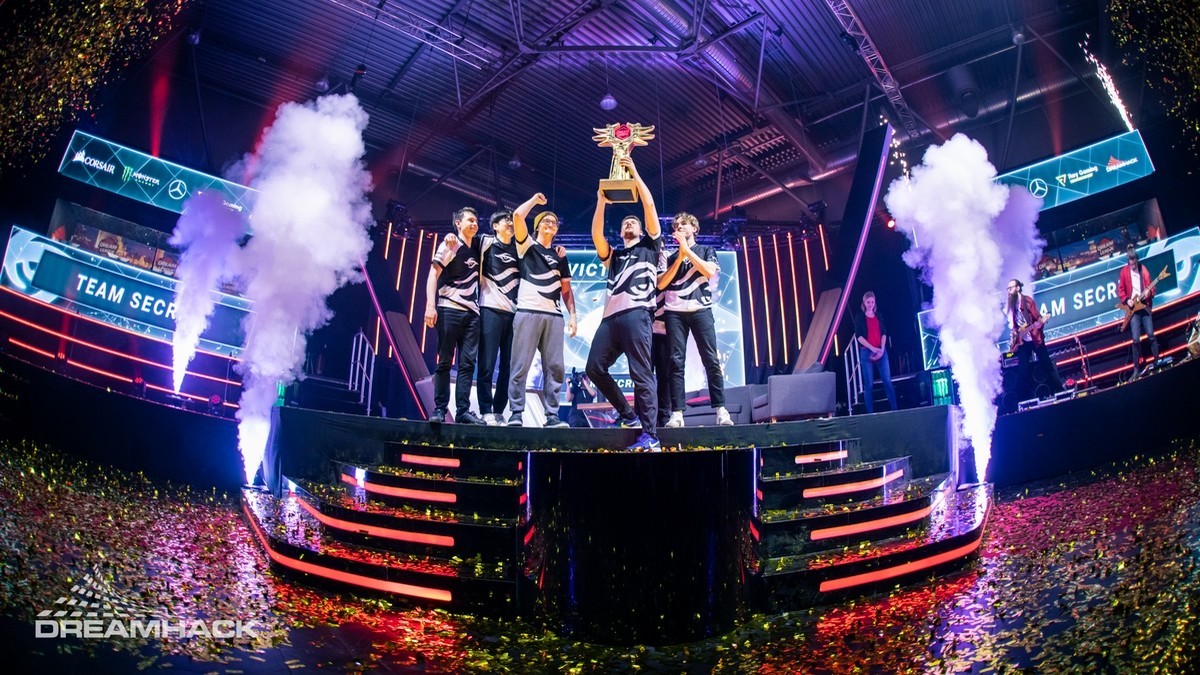 posted by NanaKrustofski,
Five games, 202 kills, one Meepo pick, countless amazing plays and five Major champions: The DreamLeague Season 13: The Leipzig Major Grand Finals between Team Secret and Evil Geniuses had it all. After several hours of top Dota, Secret were able to claim the trophy 3-2.
ADVERTISING:

Game one: Nisha is doomed

EG started the series by crushing Secret in the first match. After 45 minutes and a 26:7 score, the game went to EG's account.

But the clear MVP of this match was Roman 'RAMZEs' Kushnarev. He continues his excellent Doom performance that already Vici Gaming had to surrender to.

In the early stage, he set up kills with his Blink-Centaur-stun combination. He then disabled Michał 'Nisha' Jankowski's Outworld Devourer basically throughout the entire game, always dooming him before he could use any of his spells. To make things worse for Secret, he went for a Refresher Orb to take out two opponents before fights.

Artour 'Arteezy' Babaev came second to Abed in terms of destruction on Razor (9/1/11). While Secret's cores were completely hampered to have a big impact during fights, EG simply overrun them. With 30k networth lead, they won the first match.

Secret were not pleased with their loss and decided to deliver an insane comeback. With nearly 50k networth lead, they catch up and tie the series 1-1.

Yazied 'YapzOr' Jaradat had an amazing match on Skywrath Mage (7/1/17). Especially in the early stage of the game he was so deadly, at one point he was even two levels above his carry.

Highlight was Nisha on a surprise Meepo. He played the Geomancer flawlessy, being safe but also going in aggressively if needed. EG had absolutely no way to deal with him and Nisha finished the match 9/1/7 with 37,6k networth – for comparison, the entire EG squad had 56.4k combined. Not even Meepo-master Abed could defeat his signature hero and Nisha even achieved a rampage.

EG were not able to deal any damage towards Secret's cores, eventhough Arteezy landed several well-placed Chronospheres. MATUMBAMAN on the other hand joined Nisha as deathbringer, getting 12 kills and forcing EG to surrender after 45 minutes.

The first matches seem rather one-sided, but game three was a complete rollercoaster. There have been fights constantly around the map, sometimes without any casualties, sometimes with a lot of deaths: Before the ten minute mark passed, already 14 deaths occured.

Andreas 'Cr1t-' Nielsen had a very strong game on Tiny and especially in the early stage, he set up kills all the time and eventually ended the match with 25 assists.

The nethworth advantage permanently changed between the teams since it always alternated who came out on top of a fight.

After 36 minutes of back and forth, EG eventually prevailed in a giant team fight and quicky won the successive one shortly after as well. From this turning point on, EG snowballed out of on control. Especially Abed was unstoppable on Storm Spirit and with a 11/1/21 score line, he participated in 32 out of the 37 kills for EG.

Arteezy had a stellar match with his 17/2/6 Naga Siren as well. Nisha on the other hand was steadily focussed down on TA and due to a surprisingly late BKB purchase, he could not really defend himself.

After the bloodbath, EG turned to Secret's building and quickly took down two sets of racks. Secret found no means to catch Storm and defeat EG anymore. Game three ends with a giant team fight, an ultra kill for Arteezy and a victory for EG, making the score 2-1.

As counterbalanced game three initially was, as dominant game four turned out. Secret slowly crushed EG and with a 25:7 kill score they made it a 2-2.

The match already started in Secret's favour during the laning stage and especially Nisha's Leshrac prevailed over Arteezy's Slark and Fly's Wyvern. From there on, Nisha kept exceeding himself, dealt most damage, got highest networth and could not be killed once by EG.

After being destroyed in lane, Arteezy was not able to get back into the game on Slark. At one point, he even made a small misplay by not activating his BKB which caused his death.

Matumbaman hat a slow beginning on Morphling, but after swapping lanes, he managed to find back to his form and started crushing his opponents. EG was lacking team fight, falling to Secret and eventually had to surrender after 37 minutes.

There have been four insanely intense games. Everything comes down to the last victory. Arteezy is only one game away from winning his first Major tournament. Then, Secret completely demolished EG.

Their draft already was ahead in the laning stage and from then on, they went out of control. After 36 minutes, the team had a networth advantage of 36k. Even the supports of Secret had more farm than any of EG's heroes.

Abed fell entirely off with his 0/5/8 Viper. Arteezy's Drow was the only one of EG's heroes that could keep up with Secret's farm at first, but even he quickly climbed down the networth rank.

Matumbaman had all the space he needed on Phantom Lancer and even getting level 20 only 25 minutes in. He finished with 22k networth, a 6/1/8 kill score and a full on Treads - Diffusal - Manta - Heart - Abyssal build.

Not being able to get a single kill throughout the last 13 minutes, EG eventually had to call GG. This makes Secret the champions of the second Major in this DPC season, and the first Major winners in the new decade.