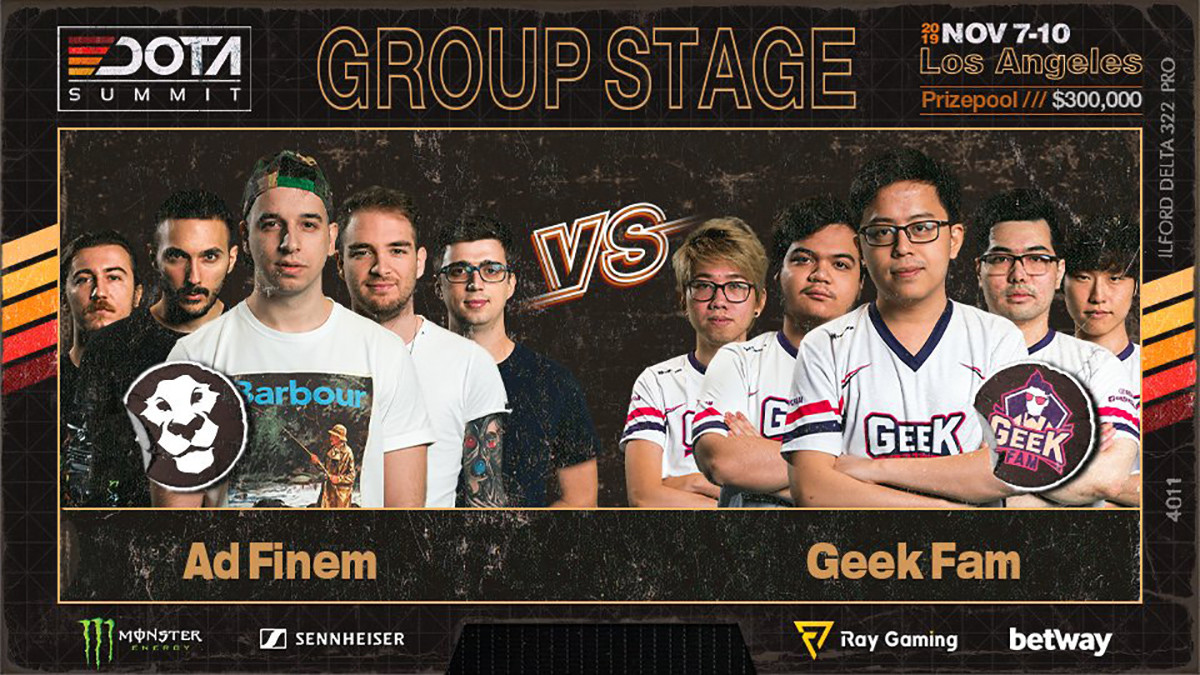 posted by Liightsdota,
The DOTA Summit 11 just started the new DPC season and we already got some amazing games of Dota 2. We took an in-depth look at the Ad Finem vs Geek Fam-series from day one.
ADVERTISING: 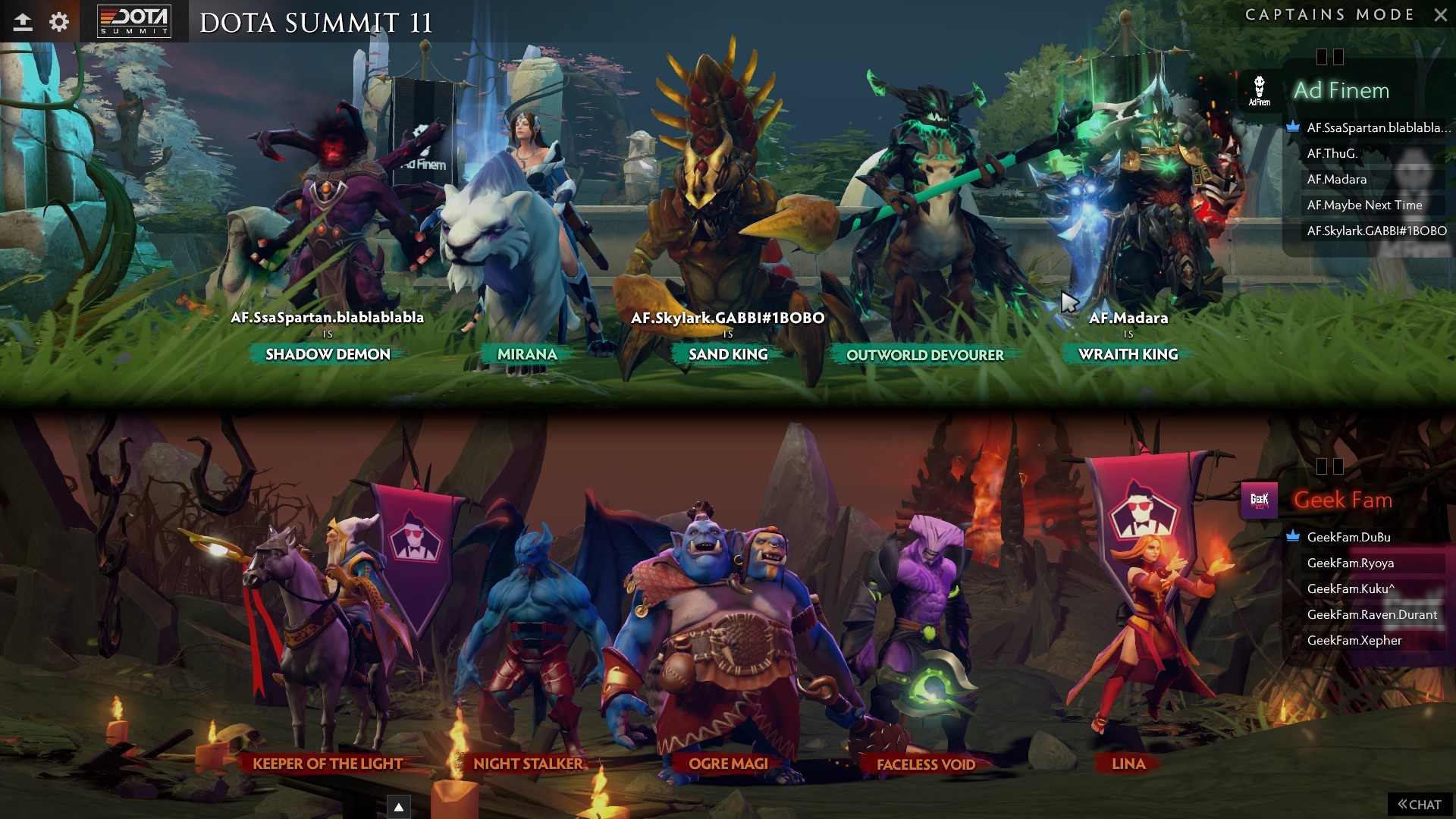 The Greeks came out swinging with a draft that significantly built around the very meta Mirana 4 played by Verros 'Maybe Next Time' Apostolos. Outworld Devourer’s Astral Imprisonment out of the Middle lane and Shadow Demon’s disruption from the hard support ensured that Mirana was able to have a very reliable setup for her Sacred Arrows in the early game. After completing his Veil and Blink Dagger extremely early, Haris 'SkyLark' Zafiriou’s Sandking took control of the midgame and landed consecutive crucial Epicenters that seemed to always come at just the right moment.

Geek Fam struck back just after 30 minutes with the completion of Blink + Aghanim's Scepter on Night Stalker, allowing their strong initiation to catch Ad Finem off guard. Often it wasn’t the initial Night Stalker jump that was the problem, but the way he forced the Greeks to scatter led to 2 and 3 man Chronospheres from Marc Polo Luis 'Raven' Fausto’s Faceless Void.

Following that fight, Ad Finem made a promising approach towards the Dire highground that began with two quick pickoffs from Dimitrios 'ThuG' Plivouris’ Outworld Devourer, but quick buybacks from the Geek Fam side led to Thug’s death from a Laguna Blade. Geek Fam repelled Ad Finem’s advance onto their highground and chased down two more crucial kills on Ad Finem Cores who didn’t have buyback. These pickoffs allowed Geek Fam to surge down mid and take the Middle Melee Rax and grab firm control of the game. Ad Finem desperately chased the retreating Geek Fam squad into the jungle, but were quickly overwhelmed and called GG after being wiped.

Excellent BKB usage combined with superior initiation and teamfight from the Geek Fam draft decided the outcome of this game. While Ad Finem secured the early game with their pickoff heavy lineup, they ultimately couldn’t spread sufficiently against large teamfight spells like Chronosphere, Crippling Fear, and Will-o-Wisp. 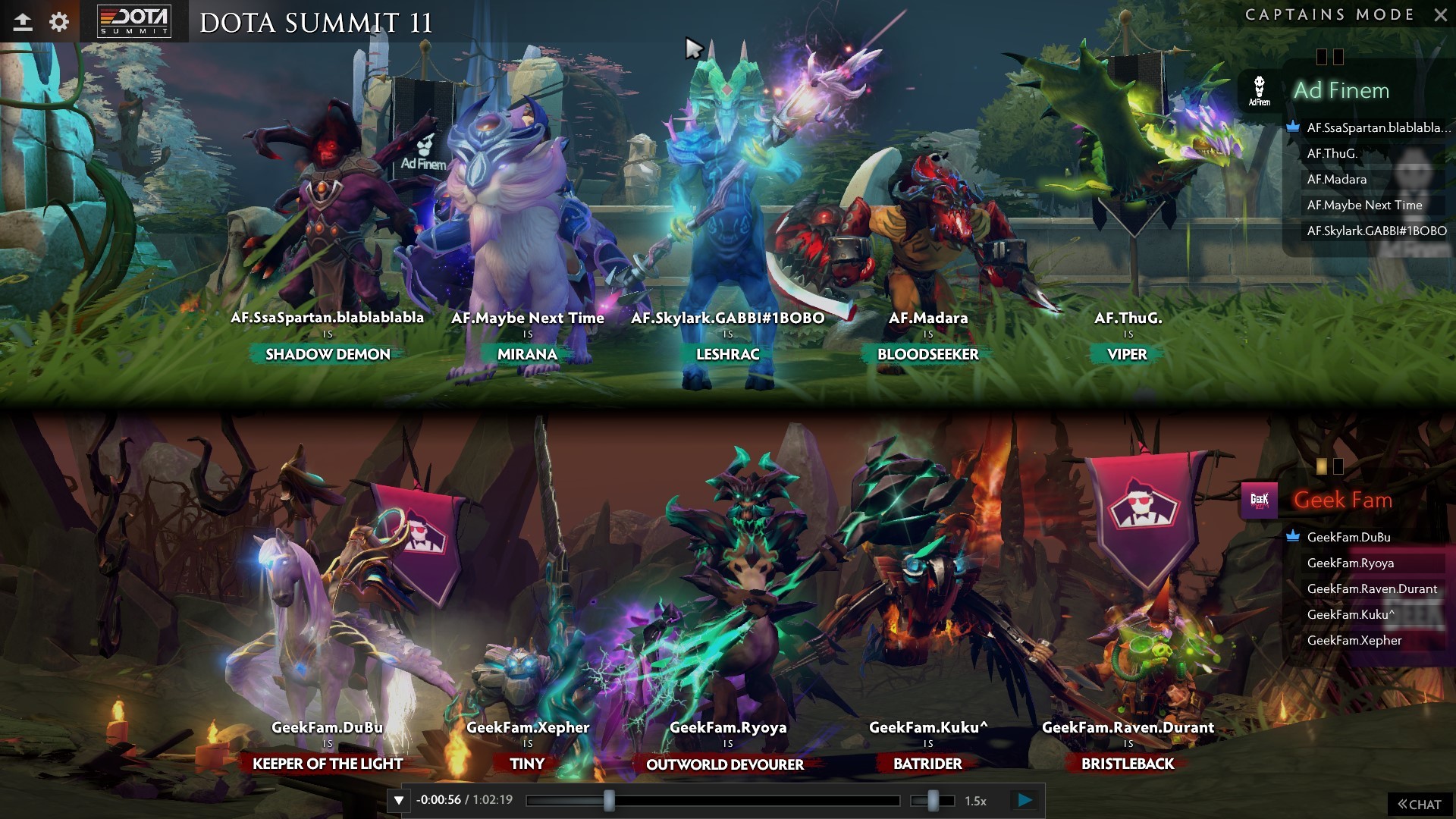 Geek Fam ran back their Keeper of the Light opener that Kenny 'Xepher' Deo played so well in game one, though this time it was in the hands of Kim 'DuBu' Duyoung. Ad Finem’s response stuck to their pickoff focused Shadow Demon + Mirana support duo. The respect ban on Carlo 'Kuku' Palad’s Night Stalker from game one led Geek Fam towards Tiny to fulfill the same purpose in the draft of game 2. Ad Finem managed to secure an effective last pick in Thug’s Viper, which they hoped would address the OD in Middle lane, as well as breaking Bristleback’s passives later in the game.

The early laning phase was a bloodbath, with kills swinging back and forth leading to a 10-10 scoreline at 10 minutes. Kuku’s Batrider proved as deadly an initiator as his Night Stalker, finding consecutive targets to pull back to his teammates, even prior to getting a Blink Dagger. However, Ad Finem grew wise to Kuku’s plays and a good disruption from Giorgos 'SsaSpartan' Giannakopoulos prevented an initiation on his teammate’s Bloodseeker, allowing the Greeks to score two kills back the other way.

Rod of Atos vs. Force Staff

Ad Finem hit an early power spike with the pickup of Rod of Atos on both their Viper and Leshrac, allowing for an easy pickoff that they transitioned into both a tier 2 and tier 3 tower in the Middle lane. The power of the Atos pair allowed Ad Finem to take control of the game, securing a few unanswered kills that led them to attempt Roshan. They managed to secure the Roshan kill but great positioning from Kuku’s Batrider allowed him to snatch the Aegis! Geek Fam chased the retreating Ad Finem squad and managed to secure two unanswered exit kills. This swung the momentum of the game and vision control back to Geek Fam.

With Geek Fam holding the advantage, Ad Finem felt forced to make a play. They pushed up into the Dire jungle and found Dubu’s Keeper of the Light as a pickoff, but he was able to drop down his ultimate to disrupt the ensuing fight. Bolstered by the pickup of Eric 'Ryoya' Dong’s BKB on his Outworld Devourer, Geek Fam was able to wipe the overextending Ad Finem side and trade 4 for 1.

A pair of Force Staffs allowed Geek Fam to save teammates caught by Rod of Atos and they played excellent drawn out fights where they slowly worked down their opponents behind an unkillable Bristleback.

The game deciding moment happened as Ad Finem attempted a second Roshan. They’d learned their lesson from last time. They prepared people outside the pit to prevent Kuku from snatching the Aegis a second time and finished Roshan. Geek Fam capitalized on positioning as Ad Finem was leaving the pit and managed to toss Shadow Demon back to their team for an unanswered kill. With the Disruption save out of the game, Geek Fam immediately smoked and surged forward towards the retreating Ad Finem side, leading to another excellent Will-o-Wisp which secured four unanswered kills.

Following that fight, Geek Fam took the Middle Tier 3 before cleanly retreating as Ad Finem blew their remaining buybacks. In a case of Déjà-vu, Ad Finem pursued the fleeing Geek Fam squad into their jungle and got wiped in the same fashion and location where they lost game one.

Kuku stood out as an MVP for the series, as he made many crucial initiations which put a stop to Geek Fam’s momentum in both games one and two. Keeper of the Light shone in both games, with his Ultimate proving incredibly difficult for opponents to fight around. This victory puts Geek Fam at the top of their group, while Ad Finem had to fight for their tournament lives vs HellRaisers.


Do you think other teams will address the favoured Keeper of the Light pick in their opening bans against Geek Fam?

Image credit: Beyond the Summit