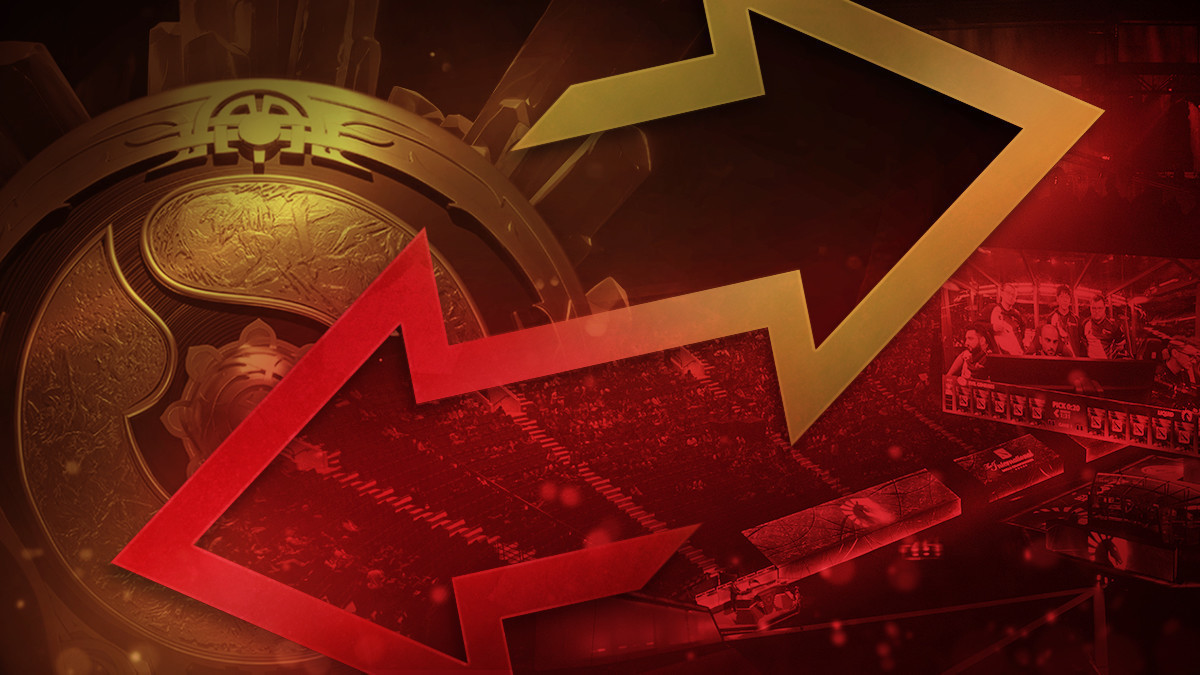 posted by joinDOTA Staff,
After TI is before the next DPC season: as the Dota world championship has come to an end, teams are now free again to make roster changes. We are going to keep you posted about the latest transfers, switches, and kicks.
ADVERTISING:

Alliance will take part in the Chengdu qualifiers now that they signed the new stack captained by ex-NiP player Adrian 'Fata' Trinks. They replace the old line-up that has just been picked up by Liquid.

After Kuro and his team-mates left Liquid, the organisation announced they would continue their engagement in the Dota scene. Now they have revealed their new roster: the former Alliance line-up around Aydin 'iNsania' Sarkohi has been signed by the TI7 winner. Shortly before the start of the Chengdu 2019: Europe Qualifier, this step comes as a surprise.

Virtus.pro's line-up for the Closed Major Qualifiers is complete. Vitalie 'Save-' Melnic will play as a stand-in for the Russian powerhouse and replace Vladimir 'RodjER' Nikogosyan who left the team.

Vitalie "Save-" Melnic will be the fifth player for Chengdu Major Сlosed Qualifiers! #GOGOVP


SumaiL will play with his brother this season

The Korean organisation T1 announced their first player during TI9. Since then nothing else was announced, but it seems like their only player left the team:

All the love to 430 and NeverEnd for the titles and memories we made together, wish them best of luck in the new season. pic.twitter.com/IpJfVdyiim

Alliance need to go back to the roots: all five players surrounding captain Aydin 'iNsania' Sarkohi will leave the team.

After captain Pan 'Fade' Yi had retired and staged his comeback in Team Aster only two weeks later, Vici Gaming have found a replacement for him. Han 'pyw' Xiong played on Team Serenity for two years and made it to The International 2018.

Also, Zhang 'Paparazi' Chengjun changed his tag: from now on, he's is going to be called Eurus.

Newbee needed new players and decided to pick one of their veterans. Zeng 'Faith' Hongda will return.

It's a bit of a surprise: Adrian 'Fata' Trinks announced his new stack yesterday. This means neither Fata nor Neta '33' Shapira will play for Ninjas in Pyjamas next season.

Carlo 'Kuku' Palad will play for Geek Fam next season with other stars from the region.

Joel Mori 'MoOz' Ozambela will complete the roster of J.Storm. Clinton 'Fear' Loomis will move to position five instead.

We wish @1437x the best as he gets married this fall and thank him for his time on the team.

Welcome to @MoOzDota who we pick up as a 4, while @FearDotA moves to the 5 position, the typical captain slot.

After his short stint with compLexity Gaming, tavo decided to move back to South America. He'll play for FURIA Esports alongside Heitor 'Duster' Pereira.

We're welcoming a new roster for the 2019-2020 DPC season. This includes some new faces.

It's the biggest surprise of the shuffle: Kuro and his team-mates won't play for Liquid anymore.

For the Movistar Liga Pro Gaming Infamous had to announce their full roster:

Today we start the Movistar Liga Pro Gaming, our first Bo2 match will be against Egoboys. This is our roster for this season.#RedSide pic.twitter.com/dBeBYQF3T2

Carlo 'Kuku' Palad announced shortly after TI9 that he is searching for a new team. A few weeks later he wrote that is was just a joke - at least from his side. Now, TNC Predator announced that Kuku and Nico 'Eyyou' Barcelon won't be playing for the squad in the next season.

Today we are announcing the departure of Carlo "Kuku^" Palad and Nico "eyyou" Barcelon from our roster.

Our CEO Eric Redulfin has a message to them and to our fans. You can watch it here: https://t.co/IKWI1skks3#StrongerTogether#SummonYourStrength pic.twitter.com/GpVgMC9NRw

Jack Etienne, manager of Cloud9*, casually announced that the organisation is looking for a Dota team. You can find the statement at 11:25 in the YouTube video below.


Saksa will take a break

The European support player Martin 'Saksa' Sazdov will step back from professional Dota 2 for a while. However, he also announces that this is not his retirement. He'll be back!

Since the Peruvian TI stack doesn't want to play with Infamous anymore, it's obvious that the organisation needs a new team. The first player to join them is Mariano 'p4pita' Caneda.

He is Back... #DPC #RedSide pic.twitter.com/pFT0cTBXeQ

Almost two weeks ago Pan 'Fade' Yi announced his retirement. However, he's already back in action and will join Team Aster.

The Swedish team of The Final Tribe will merge with the former organisation GODSENT.

Today we announce that Godsent is born again and have merged with @TheFinalTribe 👊Thank you to everyone involved and to everyone who has been part of this journey. Read more at https://t.co/CKwTr19Zkp #thefinaltribeisgodsent pic.twitter.com/Tt7NgDEKaa

Sam_H with a new Filipino stack

In an Instagram post Aleksey 'Solo' Berezin hinted that the journey of Virtus.pro could be ending soon. "A change awaits us all. The composition of Virtus.pro will change a lot this year." He states that he will captain the team and now we have more confirmation on the changes: Pavel '9pasha' Khvastunov and Arsenii 'ArsZeeqq' Usov are leaving VP.

Today we are saying goodbye to @9pashka and @ArsZeeqq

9pasha will continue his journey in Dota 2 in Natus Vincere and replace Evgeniy 'Blizzy' Ree. The offlane player will go inactive for some time.

The Malaysian legend will go back to playing: Chai 'Mushi' Yee Fung will join Keen Gaming in the upcoming season as they revealed on their Weibo account. 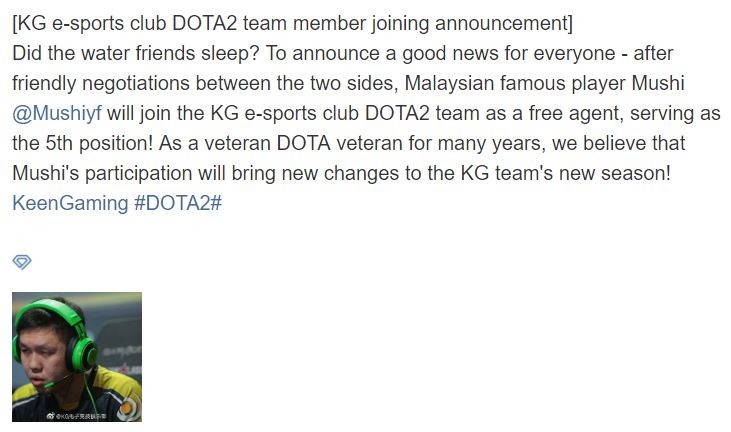 The Filipino offlaner revealed on his Facebook account that he just jebaited the community - he'll stay with TNC.

Fnatic has just announced a huge roster shuffle. Neungnara '23savage' Teeramahanon and Kam 'Moonn' Boon Seng join the team while both Abed 'Abed' Yusop and Kim 'DuBu' Duyoung are going to leave the team after their contracts are concluded.

Two-time world champion Topias 'Topson' Taavitsainen has announced to take a break. He didn't say how much time he will take for that, only that he is going to spend his time with friends and family and contemplate his future goals.

For now I am gonna take a holiday to spend time with my family, think about the future and setting new goals.
To celebrate our victory at TI9, there is a discount on my website! (2/2)

TI2 winner Wong Hock 'Chuan' Chuan has announced his return to professional Dota 2. The 28-year old played for both Invictus Gaming and Newbee in his active career.

Jonáš 'Saberlight' Volek has announced that he left Hippomaniacs. In the future he will play with a "stack of very experienced players". He hasn't revealed any names of the players or organisation as yet but will do so as soon as eveything has been settled.

Song 'Sccc' Chun doesn't take a break as said, but decides to play for Team Aster on position 1.

The Finn will take a break till the second Major of the season. This means Chaos is down to two people, Rasmus 'MiSeRy' Fillipsen and Cheng 'vtFaded' Jia Hao.

Maurice 'KheZu' Gutmann already tweeted that he's searching for a new squad. Rumours say the whole squad split up. Here is the next indication: 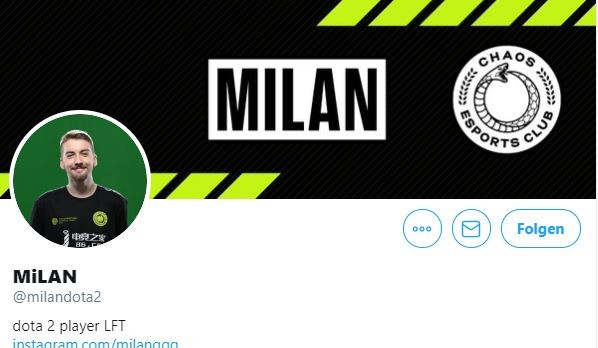 Jacky 'EternaLEnVy' Mao gives it another try this season. He picks famous players like David 'Moonmeander' Tan and JingJun 'Sneyking' Wu for his squad.

Roster Heading into next season:


Confirmed: Infamous roster stays together, but needs an org

Their miracle run at TI9 glued them together. The Peruvian squad will stay as a team, but won't play for Infamous anymore.

I'd like to announce that K1, Chris Luck, Wisper, Scofield and @StingerDota will stay together as a team but we're no longer under Infamous tag. We're looking for new offers from organizations that could be interested in the SA region. Please message me! (Rts appreciated, ty! <3)


This means the two drafters of LGD left the squad. At least, FY will come back after a 3-month-break. LGD won't compete in the first round of Minor and Major tournaments.

RuHub posted about rumours that are spread in the community:

It seems like Sumail 'SumaiL' Syed Hassan could be leaving Evil Geniuses and instead Roman 'RAMZEs' Kushnarev joins the North American powerhouse.

The Filipino offlaner had a rough season, but in the end he still qualified for TI9 with TNC Predator. The South-East Asian squad couldn't make the dream of a first SEA TI victory come true and now Kuku is searching for a new squad.

Rumour: ana on a break again?

Johan 'BigDaddyN0tail' Sundstein's tweet is nothing official, but it could be a hint of Anathan 'ana' Pham taking another break after TI.

The next TI participant has left his former team: Maurice 'KheZu' Gutmann isn't playing for Chaos Esports Club any more. The team surrounding Dota legend Lasse 'Matumbaman' Urpalainen was the first to be eliminated from TI9

LFT as pos 3/1, ANY region, still checking options. I want to have fun, get better, help each other & attend lans and next TI.

The 23-year-old captain of Vici Gaming decided to retire from Dota 2.

This means the two times Major champion of the season is down to four players and needs to search for a new captain and position 4 support.

Mineski secured a respectable 9-12th place at TI9, beating Natus Vincere in the first round of the playoffs. Shortly after the tournament, the SEA organisation parted ways with their Bulgarian position 1 Nikolay 'Nikobaby' Nikolov. The carry is now looking for a new team.

Also Ryan Jay 'raging-potato' Qui and Michael 'ninjaboogie' Ross have left the team in the meantime and look for new opportunities in the Dota scene.

After not qualifying for TI9, it's not a big surprise that compLexity Gaming won't stay together. However, it's astonishing that the whole squad will be released. That means Zakari 'ZfreeK' Freedman won't be part of coL after five years with the organisation.

It is with great appreciation that we announce the release of our Dota 2 roster today.

We'd like to thank the team for this season and wish everyone the best moving forward.

Over the next few weeks and months, we will be evaluating our options for the next DPC season. pic.twitter.com/OUDByYCAUd

The organisation T1 from South Korea, known for famous teams in League of Legends and StarCraft II, will enter the Dota 2 scene.