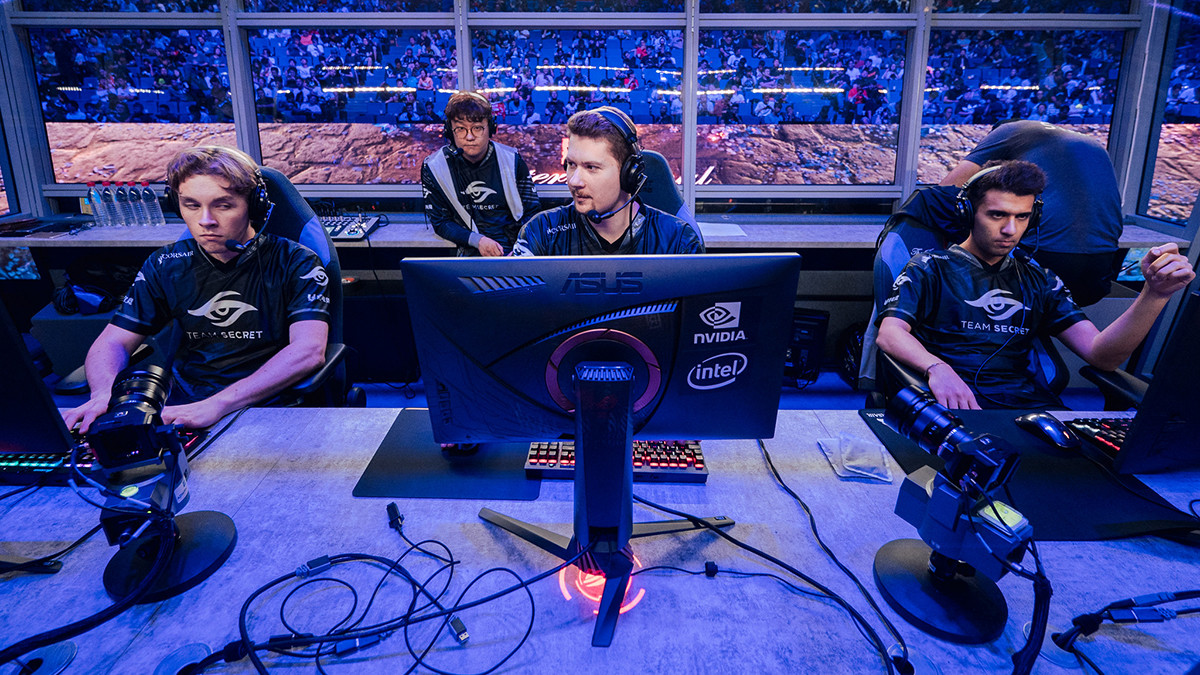 posted by SmittyW.,
The Upper Bracket matches of today haven't even been played but we couldn't get any more excited. The Lower Bracket matches were intense affairs that brought us entertaining matches and some surprises.
ADVERTISING:

Prior to TI9, Infamous were considered a squad that would potentially drop out in the group stage. Despite all the doubts, the South American stack almost made the Upper Bracket. Therefore, eliminating Keen Gaming was probably not too much of a surprise.

Their next obstacle, Newbee, however, couldn't be regarded as anything less than their most difficult opponent yet. The American squad had played a great tournament before they fell to OG in the Upper Bracket. This best-of-three would put Infamous' strength to the test.

Infamous having a good time

Right at the beginning, the Peruvians and the Bolivian showed much joy playing on stage: we saw bodyblocks with the chicken courier, sprays here and there and no fear of their opponents. Newbee got outplayed many times before they could find their first kill after more than 7 minutes. The North Americans managed to initiate a good fight in the middle eventually, but even then Infamous were able to turn the tides and deny a comeback.

Especially Hector Antonio 'K1 Hector' Rodriguez Asto's Wraith King did a great job at keeping Newbee at bay and played a huge part in the game plan of the South Americans. After 25 minutes, they took the 1-0 lead.

Game two looked much better for the team of captain Johan 'pieliedie' Åström. After the initial skirmishes in which both teams lost some heroes, Newbee edged out an advantage. When Quinn 'CCnC' Callahan's Outworld Devourer got his farm, there was no holding back anymore. Infamous seemed rather helpless for quite a while until their rivals finally went for the killing blow equalising the series.

One could have thought that Newbee now found their way back into the series, gaining more confidence from game two. But Infamous put a spoke in their wheel. The SA squad got the better trades and accumulated more networth than their opponents. Their composition featuring Slark and Leshrac profited very much from Hector's Wraith King once more – who was an absolute nuisance to Newbee. The South Americans played very confidently and didn't hide their emotions:

After 40 minutes, they closed out the series eliminating Newbee's American line-up from the tournament. With that, Infamous are the most successful Dota team from South America ever, as there has never been a team from the region that made it among the top 8 at any TI. This tournament has already been a success for the five players and it is going to be exciting to watch how far can they still go.

There was little chance that Mineski would overcome the tournament's co-favourite Team Secret – at least on paper. The outfit surrounding Clement 'Puppey' Ivanov has been the most successful one this season and played a worldclass series against Evil Geniuses. They are beatable but it takes very much from a team to do so.

Mineski played Secret already in the group stage, so one might draw some conclusions from that. On the one hand, they at least managed to tie a series with Secret. But on the other hand, they were completely outclassed in the first game in under 20 minutes with an barrassing 1-24 score. Could they build on their partial success and pull off a David-esque move?

Game one between the two contestants can be certainly regarded as a curiosity. Team Secret did us a favour and picked Meepo who's really popular with the fans. Yeik Nai 'MidOne' Zheng was the kill leader on this hero with 11/9/7. These stats show that the game was much extremely close, though.

Mineski disrupted Secret's laning phase early on taking control over the game. Their objective was to deny their opponents as much farm as possible and picked off heroes left and right. And their strategy worked out quite well for the first 20 minutes. But then, Team Secret fought back: after they already took a favourable fight at Roshan's pit, Ludwig 'zai' Wåhlberg landed a huge Ravage that would initiate a whole wipe of the enemy team.

This fight was crucial for the Major winner to stay in the game and fight back. But Mineski were not done yet. Until minute 33, it looked like they were still taking the game, but then Secret showed another noteworthy scene that would end the game: Mineski charged for an attack, with the Aegis in their back and a superior networth. But somehow, Secret turned the tide once more with an incredible play by zai and MidOne in particular.

As incredible as this turnaround was, Mineski wasn't afraid of Team Secret after game one. In game two, they asserted their early game dominance once more against the supposedly best team in the world. In this regard, game two was very similar to the first one: the South-East Asian squad accumulated more networth, got more experience and got the more favourable trades, but were not able to tie the series so easily.

Team Secret once again began to dictate the pace of the game after half an hour, only picking fights they were sure to win. This made it impossible for Mineski to end the game and reminded one very much of game one. Until, Nikolay 'Nikobaby' Nikolov found an opening with his Faceless Void, that is. It almost looked like Mineski could finally take a game ending fight, when it got turned around once more:

After the fight, Team Secret advanced to the Radiant base, bulldozing through and going for the tier four towers immediately. The respawned Nikobaby couldn't do anything as he was waiting for his next Chronosphere. In the last second, he was able to use his ultimate again and save the day: Team Secret lost the base race big time and now it was Mineski who were sieging the Dire base.

Another well-placed Chronosphere enabled Nikobaby to equalise the series after a game that surely put many people on the verge of having a heartattack.

In game three, both teams started a little more carefully into the match. For the first ten minutes, we didn't see any major plays or blunders but then Team Secret hit hard:

This time it was Michał 'Nisha' Jankowski who made a great impact with Faceless Void on the game. The carry beat the hell out of Mineski, placing excellent Chronospheres. For the first part of the game, Secret just outclassed Mineski, winning teamfight after teamfight until this scene happened:

After half an hour, Mineski pulled the trigger and invested into a major battle in their own jungle. They committed to undo Secret's advantage and bought back into the game, eventually breaking Secret's dominance. After that, the SEA squad gained the networth advantage, and from this point it was anyone's game again. The fights we got to see after that were literal rollercoasters of emotions and excitement that were a joy to watch:

In the end, Nisha and his team-mates were able to take the upper hand in this decisive fight and advanced to Mineski's base. This time, Nikobaby and co were couldn't deflect Secret's charge and had to concede their 1-2 loss.

Although Secret won the series , they really had to struggle in order to overcome Mineski. The outfit from South-East Asia played a really strong series promising a bright future in the upcoming DPC season. In their next match, they are going to face Infamous. Will this series be as close as this one too?


Who is going to win the next Lower Bracket matches?